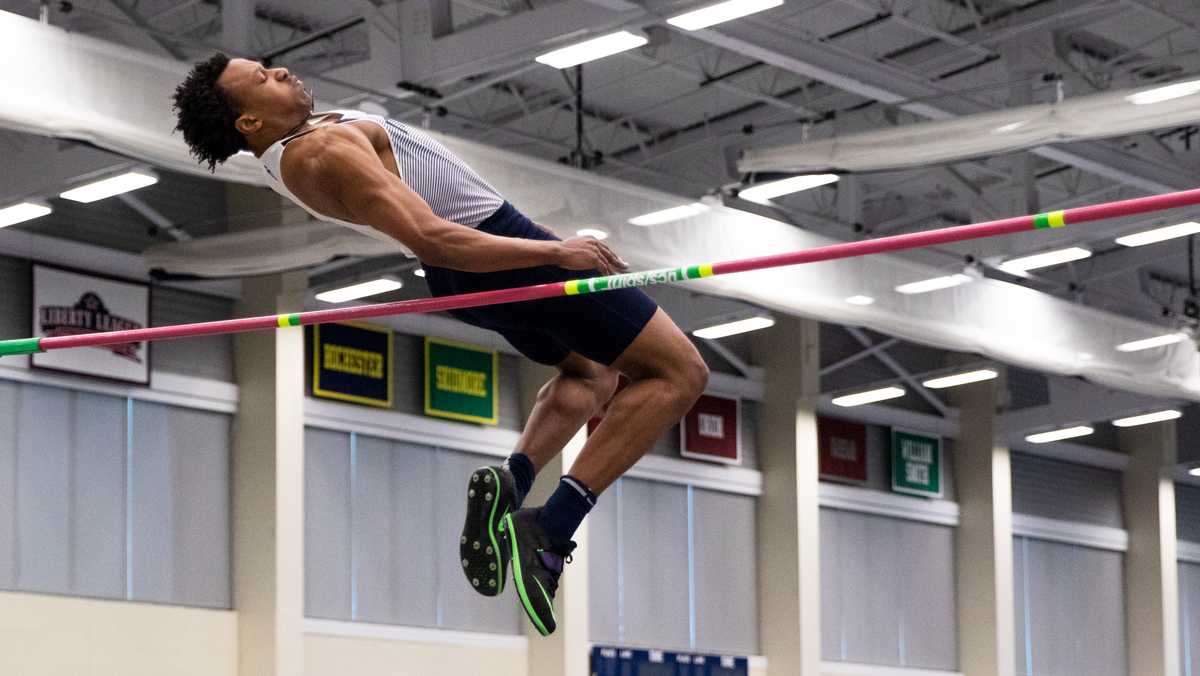 Sophomore Kasim Cisse came to Ithaca College ready to play for the men’s basketball team. But this winter season, he is lacing up his track spikes rather than his basketball sneakers.

Cisse said that he knew nothing about track and field before arriving at South Hill and had never seen a hurdle or a high jump mat before. However, after struggling with an illness at the beginning of the winter season, he decided, for the time being at least, to become a full-time member of the men’s track and field team. He is the squad’s best high jumper.

He started playing basketball at a young age with friends in his neighborhood in the Bronx, New York, Cisse said. His formal basketball career began in middle school when he was the captain of his team. He continued to play at The Harvey School in high school where he was also a captain.

“In the hood, that’s all we do,” Cisse said. “We just play basketball.”

Cisse said that after his success in middle and high school basketball, he assumed moving on to the college level was the next step in his career. After deciding to attend Ithaca College, Cisse said, he reached out to men’s basketball head coach Jim Mullins via email and walked onto the men’s basketball team during his freshman year. He appeared in 12 games and scored five points for the Bombers in his first season.

Mullins said that he did not know a lot about Cisse before he tried out for the Bombers’ basketball team, but his athleticism caught Mullins’ eye. Mullins said that he specifically remembers Cisse jumping so high during tryouts that he hit his head on the rim of the basketball hoop. After the winter basketball season ended, Cisse said Mullins suggested that he join the outdoor track and field team for the spring.

“The thing about Kasim is he’s a diamond in the rough,” Mullins said. “He’s raw. He mentioned to me when we started going through our strength training workouts last year [that] he had never lifted before in his life. It’s pretty amazing when you take into account his explosiveness.”

Cisse attended his first outdoor track practice in April 2019 — just two weeks before the 219 Liberty League Championships. At the meet, he became a Liberty League champion in high jump with a height of 2.01 meters. He then took fourth place at the All-Atlantic Regional Track and Field Conference 2019 Outdoor Track and Field Championships and finished the season nationally ranked No. 37 in Division III.

“He is probably the most talented athlete I have ever seen,” Greenwald said. “I used to play football here, so I’ve seen a lot of athletes. Track and field is usually some of the best athletes there are in college, and I’ve never seen anything like Kasim.”

Assistant jumps coach Mary Wallenbeck said that she assumed Cisse would be a talented high jumper based on his athletic ability but that she was concerned he would not be comfortable with the backward jumping technique involved in the event. High jumpers approach the mat on a curve, which requires them to leap in reverse and arch headfirst over the bar.

“The test of time was literally getting him to go backwards,” Wallenbeck said. “In his first time, he was totally comfortable there. From that point on, I knew he would be very talented.”

Cisse said that he had plans to continue playing basketball for the Bombers during the 2019–20 winter season, but he suffered an illness that prevented him from competing for a month. Cisse said that he and the coaches decided he would redshirt this basketball season to focus on indoor track rather than trying to catch up with the rest of the team after losing a month of training. He said he plans to try out again for the basketball team for the 2020–21 season.

Wallenbeck said Cisse’s basketball background definitely contributed to his natural talent in high jump because the technique is so similar to doing a layup in basketball. She said that if he is struggling to do something new, she will relate to basketball to help him understand what to do.

Wallenbeck said that because Cisse joined so late into the 2018–19 outdoor season, she had to cram as much information as she could in time for him to jump in competition. At this point in the indoor season, Wallenbeck said she is trying to have him learn the technique a little better than Cisse did at first, causing his heights to slightly drop, but it will help them increase in the long run.

Greenwald said Cisse has already made great strides both physically and mentally with his jumps. He said he has seen significant improvements in Cisse at practice just within a few days.

“He’s making huge changes in his jumps every single day, and it’s really nice to see that,” Greenwald said. “I think, along with that, he’s becoming a lot more coachable because he’s responding to cues a lot better and understanding how track works.”

Greenwald, who is the only other men’s high jumper for the Bombers, said he has taken on a mentorship role in Cisse’s high jump learning process despite Cisse clearing higher heights than Greenwald did as a beginner. Cisse’s personal best in the high jump is 2.01 meters while Greenwald’s is 1.95.

“I don’t have anyone else on the team, but he shows me a lot,” Cisse said.

Wallenbeck said she was impressed with Greenwald’s graciousness and leadership with Cisse.

“This would have never, ever have worked without Rob,” Wallenbeck said. “Just within five minutes of practice, Kasim was doing some things that Rob has never done in his life, and Rob has been high jumping since high school. Rob took him underneath his wing.”

Cisse said one of his goals for this upcoming season is to clear the bar at above 2.05 meters. Cisse said that he jumped over the bar just one inch shy of his goal at practice recently. Wallebeck said that based on Cisse’s performances both this season and last, he could potentially compete at the NCAA championship.

“I just want him to enjoy it and just be the absolute best person and high jumper he can be,” Wallenbeck said.

Track and field athlete transitions from dunking to jumping