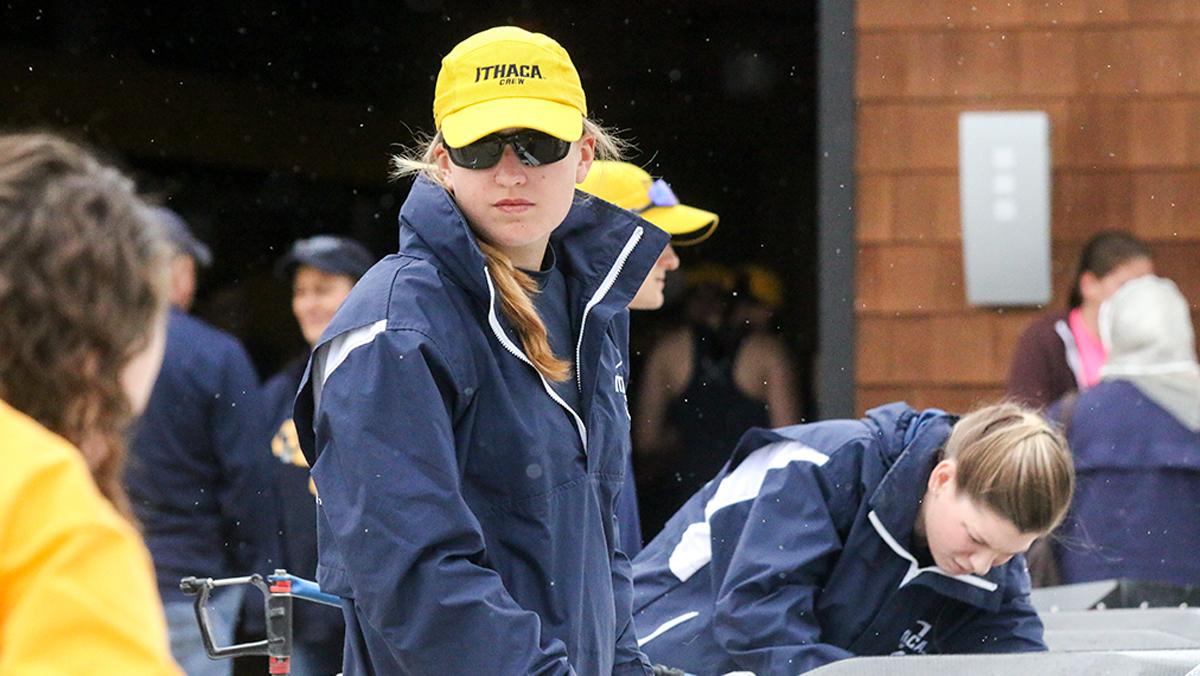 There is a video on YouTube that Ithaca College junior Pearl Outlaw watches when she needs a little motivation. It’s the S6 100-meter backstroke final from the 2012 Paralympic Games, where competitors with missing limbs are racing for the gold.

Some are missing just part of their arms, while others are missing both or part of their legs. But it is Tao Zheng, a swimmer from China with no arms, who wins the gold medal. He uses a dolphin motion fly kick to move through the water. It is his celebration at the end — where he propels himself high in the air over and over again while screaming — that caught Outlaw’s attention six years ago.

“I thought that is so amazing, why would anyone not care about this or be amazed by this?” Outlaw said. “I would so much rather watch that than watch Michael Phelps do what he does. His body was engineered to be fast in the water, … but this guy, oh my god, I could just go on for hours. I would so much rather watch someone like that that has to work so much harder to do what they do do that.”

In the race video, Outlaw saw people that had challenges just like her, but despite their challenges, they were excelling in the sport they loved. It was this video that introduced her to the world of paralympic sports and helped kick-start her rowing career, which is taking its biggest step later this month when she will compete for Team USA at the World Rowing Championships. She’ll compete in the mixed doubles event at the championships held Sept. 9–16 in Plovdiv, Bulgaria.

Outlaw’s condition is progressive and has gotten worse as she has gotten older. She said she was told over and over again that she would never amount to anything, that without her vision, she would never go to college or be successful. There is no doubt that her life has been more difficult because of this condition, but she also has not let it hold her back.

Outlaw stepped into a crew boat for the first time in the summer before her sophomore year of high school. One of her teachers was holding a learn-to-row program, and Outlaw thought it sounded like fun.

She fell in love instantly. Outlaw had been a swimmer and runner, but rowing was different. She felt an instant connection and knew this was the sport for her.

Not being able to see did not affect her as much on the water as it did on land. The hardest part for her is just getting into the boat and making her way down the dock, which she does with the help of her coaches and teammates.

Once she’s in the boat, she’s the same as everyone else. In an eight–person boat, everyone is sitting backward and listening to the directions of the coxswain, so everyone is essentially blind and has a limited sense of where they are.

It’s a welcomed alternative to the reality Outlaw faces on land, where she needs a guide dog and cane to help her navigate.

Outlaw rowed well enough her freshman year to earn an invite to train with Community Rowing Inc. in Boston, the only certified U.S. Paralympic Sport Club in the country. She spent the summer training with some of the best rowers the sport has to offer.

Training was filled with long, hard days and multiple practices. Outlaw did not have a designated seat in any of the boats and did not compete, but rather, she was there to gain experience and learn from the other rowers.

The summer was a tough wake-up call — she said she realized that her rowing was not up to the standard it needed to be to compete with the top athletes.

“It kind of broke me down a little bit by the end of the summer,” Outlaw said. “I was more stressed and overwhelmed than I really realized I was. When you are around people that are so good at what they do you really don’t realize how hard it is to stay to confident.”

She came back to school with a new mission: to be invited back next summer, and this time, be part of a boat.

In the fall, she joined the sculling team and teamed up with junior Jennie Brian, a friend of Outlaw’s since freshman year. Outlaw needed someone she could trust and could be her eyes while they were rowing, and Brian fit the part. Brian sits in the bow seat and is responsible for making the calls and giving directions. She is essentially the eyes, ears and voice of the boat and helps Outlaw get a sense of where she is on the course.

“She just makes training fun,” Brian said. “It can be tough for her sometimes, but we definitely try to keep it light, keep it fun but also staying serious and training. It just has been really cool to work with someone that is having a different experience than you and learning from her.”

Outlaw said she was determined to compete in the Open Inclusion Mixed Double at Head of the Charles, the biggest regatta in the world. An inclusion boat consists of one para–athlete and one able-bodied athlete, and no college students had ever entered the race.

Brian and Outlaw set off to Cambridge, Massachusetts for the regatta, but unlike the rest of the team, they spent most of their time at the Boston University boathouse. There, they were able to get to know the 10 other competitors, and Brian said it was eye-opening to interact with the other rowers.

“It was really cool,” Brian said. “It was very accommodating for everyone because everyone had different abilities and different needs.”

Outlaw and Brian rowed to a fourth–place finish at the event and plan on going back again this year. 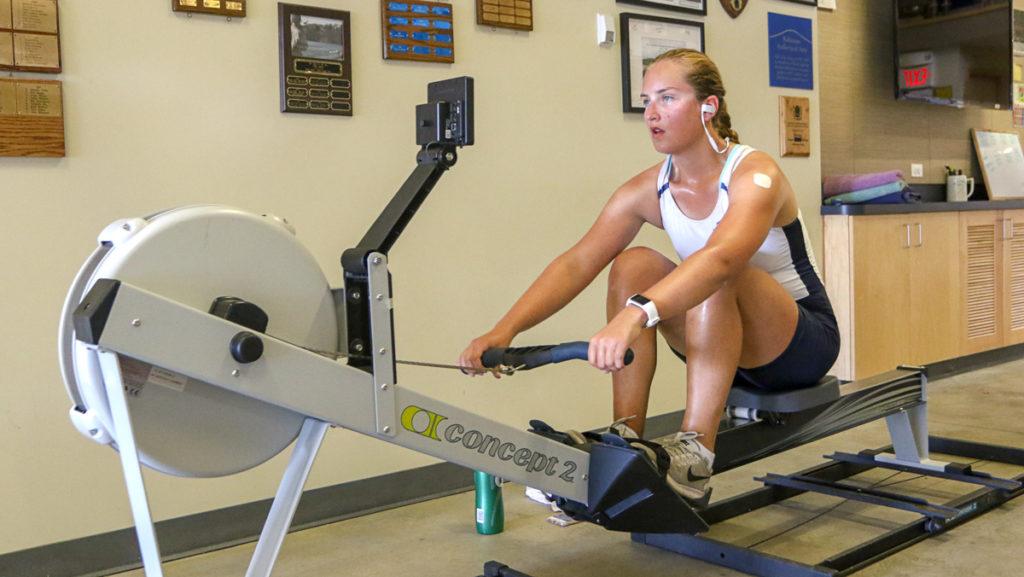 Outlaw prepares to row at the World Rowing Championships in Bulgaria.

The Path to Worlds

While her classmates studied for finals last spring, Outlaw had bigger plans.

Given her reputation as a rower, she was invited to compete at the Para Rowing International Regatta in Italy and was part of the coed four boat, which placed fifth in the race. Outlaw was one of the up-and-comers invited to race as a way to gain international experience.

Her performance showed that she could hold her own and handle the stress and pressure of competing internationally. It also earned her an invite to train with Community Rowing Inc. again and a ticket back to Boston for the summer.

That’s when she met her now-partner Josh Boissoneau and the idea of competing in the mixed double at the world championships first came up. They trained together on-and-off all summer. Outlaw was still aiming for a spot on the women’s four boat — which is an Olympic event and is generally reserved for the top four athletes.

With the help of their coach Beth Noll, the pair fine–tuned their skills and worked on building chemistry in the water.

“They are an absolute pleasure to coach,” Noll said. “Both of them have great senses of humor, which really helps when you are trying to do something that takes a lot of effort and a lot of patience and can be very frustrating.”

They were training hard all summer, taking to the water twice a day and mixing in lifts. Things seemed to be really clicking, but then Boissoneau hurt his wrist, and everything they had worked for seemed like it was suddenly in jeopardy.

Day by day, his wrist started improving, and he was able to push through the pain and continue training with Outlaw.

“I commend him so much because he’s not a complainer.” Outlaw said. “He was like ‘yeah its sore but let’s do this thing.’”

At the trials Aug. 7, Outlaw competed for a spot on the women’s four boat as well as in the double. Her performance wasn’t good enough to earn a spot in the four boat, but she and Boissoneau cruised to a win in the double to secure their place on the world championship team. They finished three seconds ahead of the second–place finisher.

Para–athletes aren’t given the same value as able-bodied athletes are in the United States, and that’s something that Outlaw said she is hoping changes soon.

In the United States, Noll said an Olympic gold medal for an able-bodied rower is worth $25,000. For a para–athlete, that same medal is only worth $5,000.

“These athletes not only have to work as hard as other elite rowers, but in my cases, they have to work much harder because of their challenges,” Noll said. “There’s a huge amount on inequity in all levels, including the amount of money put forth on the national team to support their training and development.”

Funding is a big issue, and Outlaw had to pay for her trip to worlds out of pocket. She is currently fundraising and hoping that USRowing — the governing body that oversees rowing in the United States — will be able to reimburse her for her expenses.

“None of these athletes would be able to do what they do if they didn’t have private support from friends and family members and club members,” Noll said. “They are already starting at a great disadvantage. Most are not from wealthy families. People with disabilities tend to be unemployed or underemployed. So really, they have three strikes against them before they get into a boat.”

In Great Britain and Australia, Noll said, the para national teams are state–funded, which gives them a big advantage over the United States.

There have, however, been some changes made to bridge the gap between para and able-bodied rowing in recent years. The creation of inclusion rowing — the same category Outlaw and Brian raced in at the Head of the Charles — was an initiative started by Noll and other para coaches. The idea is to show that para–rowers are just as capable as able-bodied rowers and that they can compete at a high level.

“You’ll never know if we are capable of doing it unless you give us the chance,” Outlaw said. “We got it for the first time last year and we killed it. Baby steps. It’s awesome.”

Outlaw is already in Bulgaria getting ready for the championships. Her parents and guide dog will also be making the trip to watch her race.

Outlaw will be joined by a few other former Bombers. Erik Frid ’14 will be competing in the men’s four boat and Emanuel Valentin BS ’07, MS ’11 will be coaching the lightweight men’s quadruple sculls.

It will be Boissoneau’s first international race and Outlaw’s second. The expectations are simple: go out there and do the best they can.

“It’s anybody’s game, so we are just going to go in there and do what we can do,” Noll said. “I think they are well prepared, they are excited for it and we will just have to see and hope it’s our day.”

Outlaw has bigger goals beyond just competing at the world championships. In a few years, she hopes to be rowing at the Paralympics. She also has aspirations of helping other rowers see the potential in themselves, just like her coaches did for her.

“Honestly it still feels like it’s not quite real,” she said. “It hasn’t quite sunk in. I think once we get there it will be like ‘oh wow this is real,’ but right now, I still feel normal.”