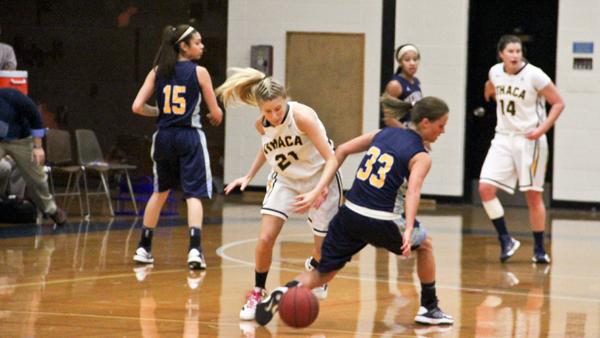 The women’s basketball team has started off 6–1 this season with help from a group of role players that have provided a spark off the bench.

The Bombers’ second unit has already made big contributions this season, totaling 25 steals and averaging 20 points per game after the first six contests — the highest scoring bench in the Empire 8.

Junior guard Elisabeth Wentlent said the bench players have already been able to make an impact this year because of the high level of play expected from everyone.

“In practice, we’re all held accountable to the same standards, so when it’s game time, we’re definitely comfortable having everyone in,” Wentlent said.

Three of the biggest sparks coming into the game for the Blue and Gold are from the sophomore class. Forward Geena Brady and guards Samantha Klie and Ally Mnich have been able to provide size and energy on both sides of the ball. Mnich said she, along with the other non-starters, have embraced their positions on the team for the 2012-13 campaign.

“We knew coming into the season that we had to become these role players,” Mnich said. “If we’re going to win a national championship, we all have to accept where we are on the team because there’s no ‘I’ in ‘team.’”

Head Coach Dan Raymond said the coaching staff met with players last spring individually to discuss what improvements each player needed to make. He also said the performances from Brady, Klie and Mnich reflect how hard they worked in the offseason to improve skills like shooting, dribbling and footwork.

“They took it upon themselves to get better,” Raymond said. “It’s so obvious to anyone who saw [Brady, Klie and Mnich] last year and watched us this year so far that there’s significant improvement, and it’s on them.”

Last year, the sophomores averaged less than 11 minutes each per game. Their amount of playing time has increased, with at least one of the three players being the first substitute of the game since the season opener against Hamilton College.

Brady is the tallest player on the roster at 6 feet and 1 inch, and is currently 5th on the team in scoring with 52 points. Wentlent said Brady has really stepped up this season on the post.

“[Brady’s] really starting to realize how much of an advantage she has over everybody just because of her body type, and she’s got a great hook shot she’s been developing,” Wentlent said. “If she can keep developing her post game, then she’s probably going to be unstoppable.”

Raymond said Klie and Mnich have improved on both sides of the ball. Klie and Mnich are two of the team’s top on-ball defenders and are third and fifth in steals, respectively. On offense, Mnich said she has become a more confident shooter, while Klie’s stats show her development into a distributor. Klie, who currently leads the team in assists with 22, said the difference between last season and this season is confidence.

“It’s less nerve-racking to get in the game, and it’s about making things happen rather than filling in for a quick second,” Klie said. “Our role has changed this year, and we’ve been trying to take it more seriously and make a difference.”

Raymond said he likes to mix up the team in practices rather than having the starters play the non-starters all the time, because he wants different players to play against each other.

“I know a lot of coaches don’t feel that’s the best way to go, but it’s something I feel enhances our chemistry,” Raymond said. “I think it’s a good thing that our players get a chance to play with each other and not just always the same kids all the time.”

Having a deep and reliable bench could be beneficial for the Blue and Gold, especially late in the season when fatigue starts to become a factor, Wentlent said. She also said having strong role players to relieve the starters gives the Bombers a big advantage.

“Having fresh legs that are contributing so much, it’s really going to make us that much more threatening to everybody else because we can just compete at so many different positions on the floor,” Wentlent said.