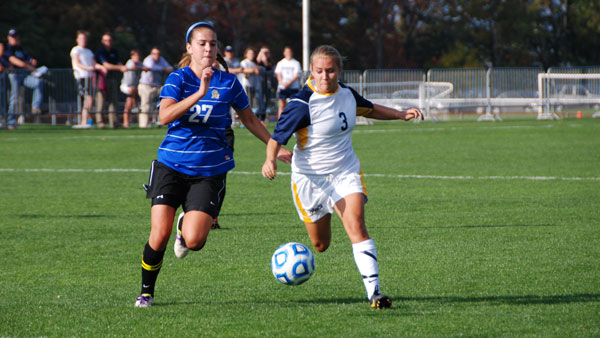 When the women’s soccer team took the field against No. 9 Misericordia University on Oct. 2, more than a non-conference win was on the line.

Last season, the Cougars ended the Bombers’ NCAA playoff run by upsetting the Blue and Gold in penalty kicks in the Sweet Sixteen round. After knocking the Bombers out of the tournament at Carp Wood Field, Misericordia advanced to the Final Four in San Antonio, Texas, the same place where the Bombers’ season ended in 2011.

“We were devastated, disappointed and let down,” she said. “This game had been on my schedule from the minute that last game ended. For us, there was a lot of emotional baggage leading up to this game.”

Despite the feelings before the match, the team did nothing different to prepare during practice, Jones said.

“We always just worry about ourselves and how we can improve in order to play our best, not necessarily to match the other team,” she said. “We can’t be worried about what they’re doing.”

Even though the team did not organize anything in particular to ready themselves for the game, sophomore back Kristina Buhagiar said the importance of the game was in the back of the players’ minds in the days leading up to it.

“I wouldn’t really call it revenge, but we knew we were going to leave it all on the field, maybe even more than usual,” she said.

Unlike the game last year, which ended in a 0–0 tie after 90 minutes of play, senior forward Ellyn Grant-Keane gave the Bombers an early lead with a goal in the 10th minute. From there, it was all about holding the lead, Jones said of this week’s game.

Misericordia tightened up its defense after Grant-Keane’s goal and allowed just four more shots on goal, whereas the Bombers have averaged nine shots on goal per game in their first nine games of the season.

Misericordia senior back Nicolette Ruffler said the Cougars’ slow start was detrimental to her team’s chances of winning.

“We struggled starting the match with the intensity we strove to find,” she said. “We weren’t the team we are capable of being until around the 15th minute. And if you don’t start well against good teams, they tend to put you in a hole. After the 15th minute or so, we found a good rhythm of possession and created some quality chances but didn’t finish them. We need to play a full 90 [minutes] instead of starting slow and putting ourselves in an early hole.”

The Bomber defense, on the other hand, was solid for all 90 minutes, as it recorded its seventh shutout in 10 games. According to Jones, the defense was key in stopping Misericordia’s junior forward Megan Mahoney, who transferred from Division I Canisius College this year.

Mahoney is tied for seventh nationally in assists per game. She has been a force for Misericordia with seven goals and 10 assists in the season.

“We knew she was going to be a problem, but I thought we did a really good job shutting her down and keeping her out of the game,” Jones said.

Though Misericordia graduated five seniors from last season, including two who converted penalty kicks in last year’s game, most key players returned, including sophomore goalie Maureen Ciccosanti, who ranks eighth in the country in save percentage. Ciccosanti stopped two of the Bombers’ penalty kicks last year to advance the Cougars to the Elite Eight round.

This season’s win against Misericordia also gave the Bombers their second victory against a top-10 team, which will boost their national ranking for the postseason. However, both Jones and Buhagiar said the game was bigger than rankings or statistics.

For Jones, the 1–0 win gave the team closure from last year’s loss.

“It was frustrating for us towards the end of the game last year where we were playing this team that kept matching us,” she said. “We felt like we were better, but for some reason we got matched really well, and we just got frustrated. Now, we knew we were the better team, and we handled it well.”