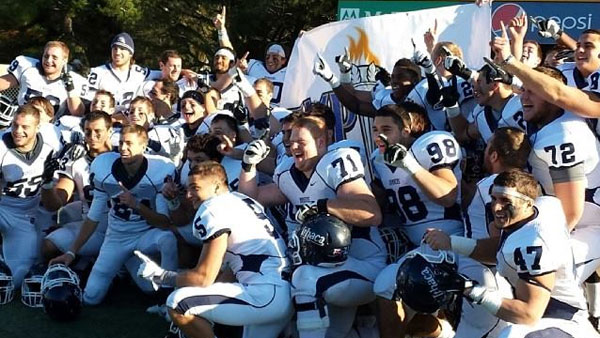 Courtesy of Christian Araos
Members of the football team pose with the Empire 8 banner at the conclusion of the Nov. 9 game against Salisbury University.
By Christian Araos — Staff Writer
Published: November 14, 2013

One year ago, after the football team lost the Cortaca Jug in heartbreaking fashion, defensive coordinator Mark McDonough characterized the football team’s 2012 season by one word: almost. After the Bombers won the Empire 8 Championship, he used a different phrase: “Champions find a way.”

The South Hill squad clinched its first conference title since 2008 with a 24–23 overtime victory Nov. 9 at Salisbury University. By holding the Sea Gulls to 154 total yards in the second half and overtime, the defense helped end a five-year postseason drought that was the longest in program history.

The Sea Gulls had a golden opportunity to spoil the Bombers’ postseason hopes in the fourth quarter when they had the ball at their own 23-yard line with the score tied at 17 and 10:15 remaining. They proceeded to go on a 9:21 drive aimed to kill the Blue and Gold’s chances, one play at a time. The Sea Gulls’ freshman kicker Zak Osbourne had the chance to deliver the final blow when he lined up for a 28-yard field goal with 54 seconds left in the game but missed.

Until that moment, Osbourne had converted all 15 of his field goal and extra point attempts this season. He scooped the ball on the kick, lofting it end over end. The ball seemed to be suspended in mid-air as it drifted to the left and floated across the left upright, landing a few feet behind and left of the post. No good. The Bombers survived.

Before the Sea Gulls’ fourth quarter drive, the Bombers kept Salisbury to 56 yards of offense in the second half. Though the Sea Gulls had two drives that went longer than eight minutes, those drives produced a combined total of three points. McDonough said the defense did just enough to keep the Sea Gulls out of the end zone.

Graduate student linebacker Will Carter, who recorded a career-high 18 total tackles, led the Blue and Gold. Carter’s contribution was critical since senior linebacker Jake Santora, the team-leader in tackles, had season-ending surgery on his thumb last week. Carter said the defense was beginning to wear down during the fourth quarter.

“They were moving the ball well on us, we were struggling,” Carter said. “We were trying to handle business, but they moved the ball on us. They had a couple of trick plays, they had some big third downs, which hurt us, and they got into field goal range, but we were able to bow up and hold them to a field goal attempt.”

The Bombers began overtime with the ball and took advantage of a successful rushing attack led by freshman running back Evan Skea, who had his second consecutive 100-yard rushing game to fool the Sea Gulls’ defense.

On second down at the Sea Gull 9-yard line, junior quarterback Tom Dempsey faked a handoff to freshman running back Evan Skea, rolled out to his right and found senior tight end Jared Prugar alone in the back of the end zone for the touchdown.

“We had been running the ball on them well all day,” Prugar said. “With the play action, the corner bit up hard, and I was wide open, and Tom made a great throw.”

The Bombers came within a single play of ending the game when the Sea Gulls faced fourth and seven at the Bombers 22-yard line. Salisbury sophomore quarterback John Dunbar, who replaced junior Joey Jones earlier in the game, found junior wide receiver Isaiah Taylor on a slant for 14 yards and the first down inside the Bombers’ 10-yard line. Two plays later, Dunbar scored his second rushing touchdown on a keeper around the edge to make the score 24–23 Bombers. If Osbourne converted the extra point, the game would go to a second overtime.

Osborne, a Salisbury native, lined up the routine kick and pushed it wide left again. The Bombers had won their biggest game in five years on a missed extra point. For Carter, it signified the culmination of a two-year program turnaround. He was on the first Bomber team to have a losing season in 40 years in 2011 and is now a captain of the 2013 Empire 8 conference champions.

“It’s an unbelievable feeling,” Carter said. “All the hard work and time we put in as a team, not just me, everything we’ve done, it’s an amazing feeling.”