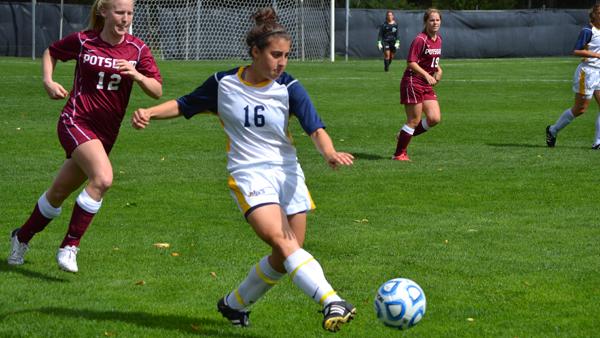 On the way to their undefeated 11–0 record, the defenders on the women’s soccer team seemed to clear every ball out of their zone before any plays on the goal could develop. In the rare times a shot leaked through, senior goalkeeper Becca Salant found a way to end up with the ball resting in her gloves. The 6th-ranked Bombers have leaned on their defense all year and relied on a staunch and talented backline throughout their currently perfect season.

Saturday’s match against 21st-ranked Stevens Institute of Technology was deja vu for the Blue and Gold. The team finished the game with a 4-0 victory, one of nine shutouts in its first 11 games. This season alone, the Bombers have only surrendered three goals through 11 games and have blanked three nationally ranked teams.

Junior midfielder Amanda Callanan said offense has always been a strong aspect of the Blue and Gold’s game, but they are trying to focus more on the other side of the field this season.

“This year we’ve been taking a lot more pride in our defense,” Callanan said. “We’ve really been making it a goal of ours to keep the number of goals allowed at zero at all times.”

Senior defender Anna Gray also said she noticed the South Hill squad has been able to keep its composure, especially in tight games such as its 1-0 victory against SUNY-Cortland. During the rain-soaked matchup with their rivals, all 11 Bombers communicated with one another, kept the zone clear from their opponents and only allowed one shot on goal during the second half.

Gray said it was one of the team’s best efforts, given that they were able to win such a tight game and make the Red Dragons uncomfortable.

“We like to see teams getting frustrated, and we definitely feed off that,” Gray said. “As a team, we like to stay positive and help one another, rather than get frustrated with your teammates.”

Salant has anchored the Bombers’ back line in net. Salant, who set an Empire 8 Conference record in saves with 139 last season, has started the season with seven complete game shutouts and played 70 minutes total in the Blue and Gold’s other two shutouts. Though she was named this week’s Empire 8 Defensive Player of the Week, Salant was quick to credit her defense for their play in the first 11 games.

“It’s really the defense that has been stepping up a lot this year, and when my defense does their job we get less shots, and it makes my job easier,” Salant said.

Though she led the conference in saves last season, Salant has seen a lot less action from opposing offenses as well this fall. She has averaged 3.64 saves per game, and after only surrendering three goals total, she boasts an average of 0.28 goals allowed per game. Salant said her confidence level has increased after seeing fewer shots on goals this season, and it has allowed her to improve her overall game performance.

“My confidence level has been higher this year compared to last year because of my experience, and I have a lot more confidence in my defense,” Salant said. “This year I’ve definitely tried to keep the defense organized and tell my teammates where they need to step and drop in.”

The Bombers are trying to deflate their opponents by putting the game out of reach before the end of the first half. Callanan said the offense has been trying to get out to a fast start so the defense can settle in and focus more on preserving the lead.

“We all play a lot more confidently when we’re in the lead, and we like it when we can have control of the game,” she said. “When we keep the ball in our zone and keep shots away from [Salant], we can sometimes see the other’s team confidence decrease.”

Though the Bombers have won their first 11 games, seven games still remain in the regular season. Salant said she and her teammates recognize that there are still aspects of their game to improve, especially concerning the fact that 61 percent of their goals have been scored in the first half.

“One of our goals is to have a game where we play a full and mistake-free 90 minutes of soccer,” Salant said. “For now, if we keep doing what we’re doing, we can go undefeated in the Empire 8 and win our conference on our home field.”