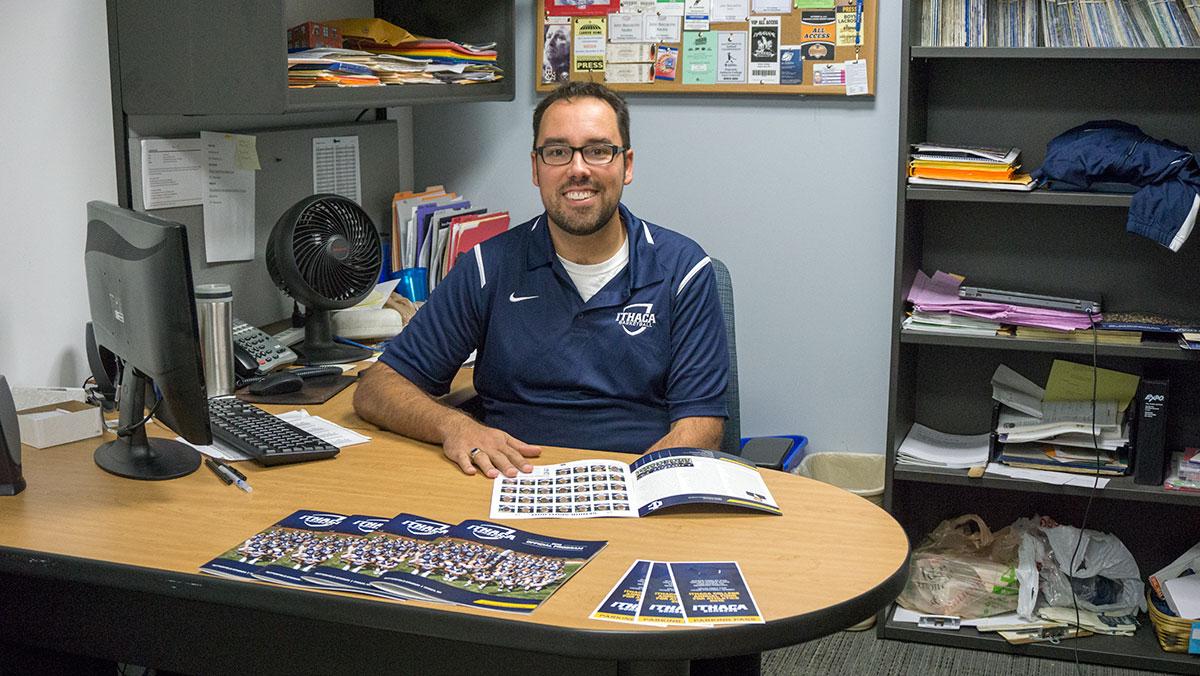 Rye Bennett/The Ithacan
John Boccacino poses in his new office with the 2015 football team media guides as he was recently hired as the new associate director of athletic communications in August.
By Jonathan Beck — Sports Editor
Published: September 21, 2015

John Boccacino was hired by Ithaca College as the associate director of athletic communications in August. His responsibilities include bolstering all of the college’s 27 intercollegiate athletic teams through the local and national media, as well as managing the athletics website and its social media presence.

Sports Editor Jonathan Beck spoke with Boccacino about his previous experience in the sports industry before coming to the college, his upgrades to the athletic communications department and any future plans the athletics department has in mind.

Jonathan Beck: Tell me a little bit about your background before you came to the college that you felt made you qualified for this position.

John Boccacino: I think one of the reasons that made me stand out for this position is I have a diverse background in communications. I was a TV broadcast major at Syracuse [University]. I’ve worked in TV stations, newspapers, radio stations, websites, pro sports teams, and I think the underlying thing is I’m a strong communicator. I was a sports writer for the Gannett Democrat & Chronicle up in Rochester[, New York,] for about 6 1/2, seven years, covering high school sports, youth sports, the Buffalo Bills, the [Rochester] Red Wings, kind of run the gamut of all the sports up there. I’ve worked at the ABC affiliate up in Rochester doing producing work, script writing, everything from studio, running a camera, editing tape, all across the board. I’ve worked in minor league sports. This will be my sixth year being a sports information director. I worked at [SUNY] Brockport as an assistant for a year, where I learned the ropes after getting laid off from the newspaper. I crossed over to sports information and got a very valuable experience there. I was the one person SID at Keuka College, another fellow Finger Lakes [Division III] institution.

Jonathan Beck: What was so appealing about the job here at Ithaca?

John Boccacino: Ithaca, again the brand itself, not to talk in cliches, but you want to work for a winner. You want to work for a school that has a strong, proud tradition. And Ithaca athletics are always in the top 25 in the national standings. They’re competing for national championships. They’re having teams make deep runs. As [an] SID, it means longer hours when you’re covering teams that [keep] winning, but that’s the fun of it. Going on the road for an NCAA appearance, hearing the buzz about Mindy [Quigg] going for 300 [wins] on Saturday. Just being involved with football, which we didn’t have at Keuka. It was all about trying to up my game and go to a place where my talents would be appreciated by a student-athlete base that was accomplishing a lot, but also with coaches that really are fun to work with.

Jonathan Beck: What changes have you made to the sports information department in the first month that you have been here?

John Boccacino: It’s been a team effort. It’s been myself, Justin Lutes and Sean Farnsworth. We’ve really done some cool stuff with athletic communications, including doing season preview stories, doing game day infographics for all of our home games, doing infographics recapping what happened after our home games, doing video highlights of select home games. We of course keep doing a great job with live streaming and the live stats for all the home games. We added Instagram. We’re well over 400 followers in 2 1/2 weeks of having the Instagram account launched, and we are doing all kinds of cool photos that we try to emulate a lot of Division III, but we try to act like a Division I mentality.

Jonathan Beck: How have you tried to improve the communications in the athletics department as a whole?

John Boccacino: We had a really good basis in place as far as the media. We have good working relationships with them, but we really want to reach out to the students on campus to let them know. We’ve got really world-class athletes that are here, are on our campus, and they should appreciate going out to watch field hockey and seeing us knock off [University of] Rochester, who is a ranked team. To knock off a top-25 team was pretty impressive, and I just don’t know if students realize or appreciate what else is going on, so we’re trying to reach out through social media, we’re trying to write more stories, do more compelling videos. And that spawns off also to the alums. We’re really trying to reconnect with our alums who had a great experience on campus. Whether it’s through alumni games, whether it’s through Cortaca, anything that gives them that hook to make them feel like, “I really want to come back to support Ithaca because I had such a great time when I was a student there.”

Jonathan Beck: Is there anything that fans and students can look forward to?

John Boccacino: It’s kind of to be determined right now. My whole philosophy was I can’t change everything until I know the process of how it works, and then we will go about reassessing, adding new projects, but I guarantee there will be a lot more with social media, more of those video features. Down the road, I’d like to unveil a series of video stories and web articles called “Why IC,” talking about why our student-athletes chose to come to Ithaca, the great redeeming values of this education and also playing for sports teams that annually are vying for big NCAA appearances. It’s one of those things where whatever we can do to showcase the pride and the strength of our student-athletes, we’re going to do from the communications office.