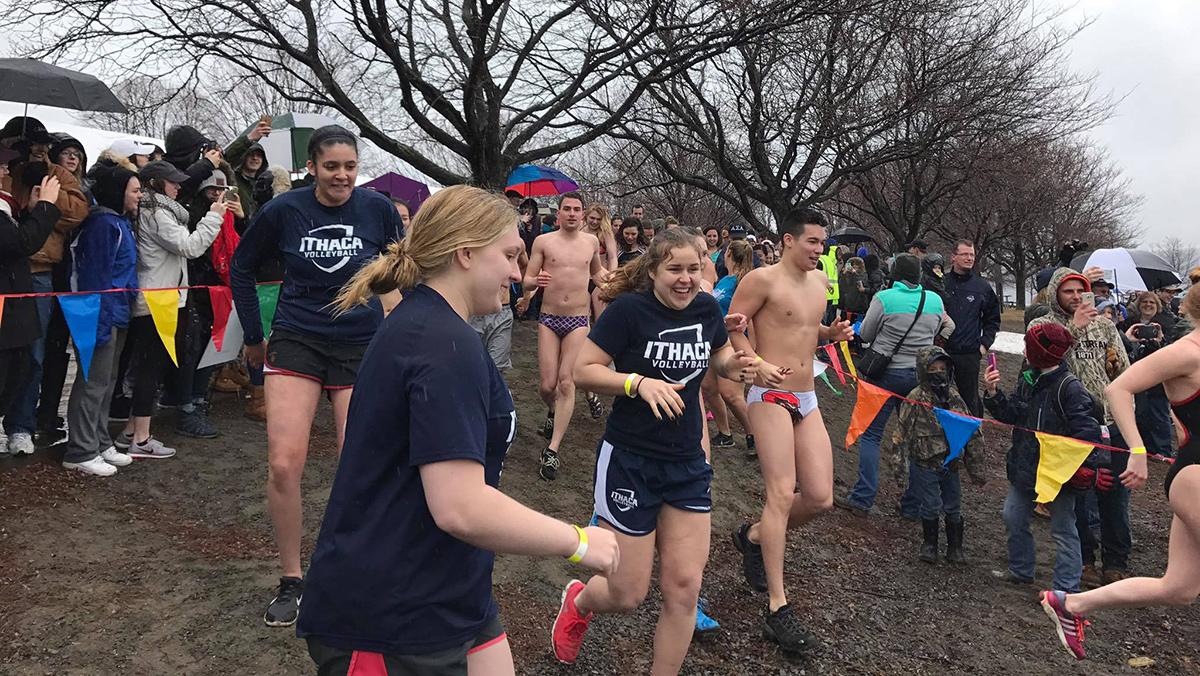 This year, more than 600 people took the plunge into Taughannock Falls in the fourth annual Polar Plunge on March 25. The event raises money to help athletes competing in the Special Olympics cover the cost of going to the Special Olympics and anything else they may need. The Ithaca community came together to raise $46,352.

Senior Scott Halpern is the community service chair of the Student-Athlete Advisory Committee for Ithaca College and asked each of the athletic teams on campus to raise money for the cause. The goal was to have each athlete raise at least $1 to show their support.

Assistant Sports Editor Caitie Ihrig spoke with Halpern about why he chose the Polar Plunge, how he encouraged the teams to participate and what the plunge means to the community.

Caitie Ihrig: What do the Polar Plunge and Special Olympics mean to the Ithaca community?

CI: Why did you choose the Polar Plunge for the athletes to raise money for?

SH: The athletes here on campus can really relate to the Special Olympic athletes. They are just like us where they are putting the time in, the sweat and tears in and sometimes even the blood in to do what they love, and that is sport. They should have the same rights as we do. We are very grateful here at Ithaca College to have great facilities, great staff, great organization going on here. We just want to give the same thing back to the special athletes.

CI: What was your role in setting up the fundraiser?

SH: My role is really just a facilitating role and being a middleman. Cassandra Rucker, who is the director of development for Special Olympics in the central New York region, sets everything up. My role as community service chair of the Ithaca College SAAC is to inform our student-athlete representatives what is going on around the area. Specifically for the Polar Plunge, [that] is to fundraise from each team, and this year, we had raised over $1,000, which almost doubled our currency from last year. We are very proud of that.

CI: How much time and energy go into setting up the fundraiser?

SH: Personally, compared to other people, not as much. I know Cassandra works her tail off. This is probably the busiest I get as a community service chair. The Polar Plunge is the biggest event for me. It’s nothing we can’t handle.

CI: How do you encourage the teams to participate?

CI: How were you able to fundraise so much more than you did last year?

SH: I think a lot of the administration got involved this year. Last year was really just within the student-athletes. This year, we really opened it up to administration, getting ahold of parents, their friends, their fellow students on campus. Their professors were even donating. I think, more and more, it seems to be expanding here on campus. And maybe it’s from us, but I think it’s just a matter of taking initiative and having that passion for it from our student-athletes.

SH: Yes. Originally, what we did was at SAAC, we have representatives from each team, and we give out the information there and tell them to spread the word to their team. Our original goal was, we have about 800 student–athletes on campus, and if we can just get $1 per athlete, we can raise $800 right there. People donate more. Some people, instead of donating, decide to show their support by going to the event. We’ve had multiple sources of donation, but originally, that’s the goal: to try to get every student-athlete to give a dollar. Whether that happened or not, we exceeded that goal.

CI: What is your favorite part of the event?

SH: Being there. Seeing the entire community come together for this purpose, which is beyond one team, beyond even college athletics as a whole. I think this brings the country together. This is going on around the country, and to see the policemen there jumping in and administrators there, students, little kids — just everyone getting involved for one purpose is really awesome to see. Knowing that is going on not just here in this community but also around the country is something that is really special to be a part of. Being there, you really get the sense of that.

CI: What are your thoughts on this being your final Polar Plunge?
SH: It hasn’t hit me yet. I’ve had a great experience here. I’m very lucky to have fellow student-athletes who care. This experience has changed my point of view on things like that. I plan on being a part of Polar Plunge, hopefully, for as long as I can. Whether around here or in another community, I think Polar Plunge is something I can be a part of and everyone can be a part of. This isn’t necessarily my last Polar Plunge, but being here as a senior is bittersweet because we exceeded our goals, but I want to keep having an impact.