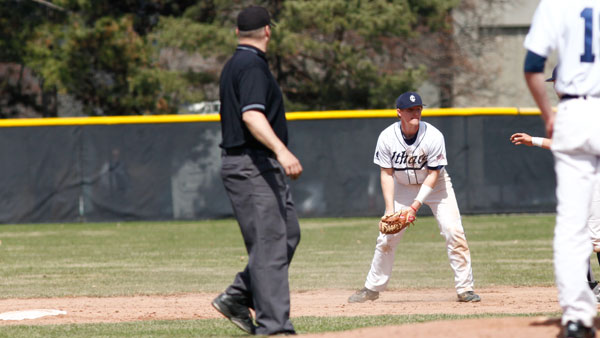 Filling Locastro’s big shoes, Yanchus has stepped up to the plate as the new shortstop this season. From watching Locastro last season, Yanchus has been inspired to emulate Locastro’s positive attitude and the way he constantly encouraged his teammates.

Yanchus started 23 of the first 25 games this season before injuring his right shoulder while the team was warming up before playing University of Rochester. In those appearances, he batted .304 and posted a .892 fielding percentage.

Though he is not able to play in the field for the time being, Yanchus’ performance at the plate has not dropped off, as he had two hits April 19 in a doubleheader against St. John Fisher College. Head coach George Valesente said Yanchus’ ability to adapt quickly has helped him adjust to the bigger role, even while injured.

“It’s like on-the-job training,” Valesente said. “He’s growing into the position, and little by little he’s starting to understand what we expect out of him for the position. He’s gotten better each time, and it’s a very demanding position.”

Despite playing through the hurt shoulder, Yanchus is scheduled to undergo an MRI next week, but he will continue to suit up as a designated hitter or a pinch-runner. According to Valesente, Yanchus may have a muscle tear in his shoulder, which would require surgery.

While the severity of his injury is unconfirmed at this time, Yanchus will remain with the team and continue to work on his hitting, which has not been impacted by his shoulder. He said he has been working with hitting coach Frank Fazio to refine his swing.

For Valesente, Yanchus will still provide value to the team’s offense despite the injury.

“He has started to give us some good offense, the ball jumps off his bat really well,” Valesente said. “His speed is a real plus for us as well, he runs really well for his size. He gives us more clout in the middle of our lineup in the fifth and sixth spots, which is really important to have.”

Yanchus said he was tentative at first, but his confidence has grown as the season has gone on. This has shown through his statistics, especially at the plate. After going hitless in the first five games of the season, Yanchus responded with an 11-game hitting streak that included seven multiple-hit games.

Valesente said Yanchus’ injury came at an unfortunate time because he had lately been playing with more confidence. Yanchus hit his first career home run in the team’s 10–8 win over Utica College on April 13, and followed it with another in the second game of the double-header that day.

Valesente said the turning point in the season for Yanchus was when the team traveled to Stevens Institute of Technology for a four-game weekend series April 5–6. In the first game against Stevens, Yanchus fielded a ground ball but hesitated and committed an error.

“We talked to him after that,” Valesente said. “I told him not to back off, because when you back off and try not to make mistakes and you play cautiously, you end up making the error.”

Since the series against the Ducks, Yanchus has committed only two errors. Despite the increase in confidence, Yanchus said he still feels added pressure because of Locastro’s lasting legacy.

Yanchus credits the older infielders for encouraging him when he compares his skillset to Locastro’s. The rest of the infield is composed of upperclassmen, and Yanchus is just one of two underclassmen consistently in the starting lineup. Senior second baseman Tim Henry said he is constantly encouraging Yanchus to continue improving at the position.

“Sometimes I don’t even think he remembers he’s filling in for Locastro,” Henry said. “I have to tell him sometimes to not cut himself short. I have to tell him that he’s good enough, if not going to be better than Locastro.”

Though Yanchus tries not to compare himself to Locastro, Henry said the two shortstops have a similar style of play that is highlighted when he plays with Yanchus.

“The only difference I would say is their fielding,” Henry said. “Tim could pick any ball, and most of his errors were throwing. Steve is the opposite. He has a stronger arm, but he doesn’t pick balls quite like Tim did.”

Valesente said he has seen the expectations that Yanchus puts on himself. Like the rest of the team, Valesente tries to encourage Yanchus to stay within himself.

“I do believe that he has felt the pressure, but he has handled it very well,” Valesente said. “I told him, ‘Don’t try to be Tim Locastro. Just try to be Steve Yanchus.’”

For Yanchus, the encouragement from his teammates and coaches has allowed him to set aside the expectations and pressure and focus on his attributes instead.

“I go through the year, and people keep telling me that I have big shoes to fill,” he said. “But I’m a different player than [Tim], I can’t be expected to do the same things.”