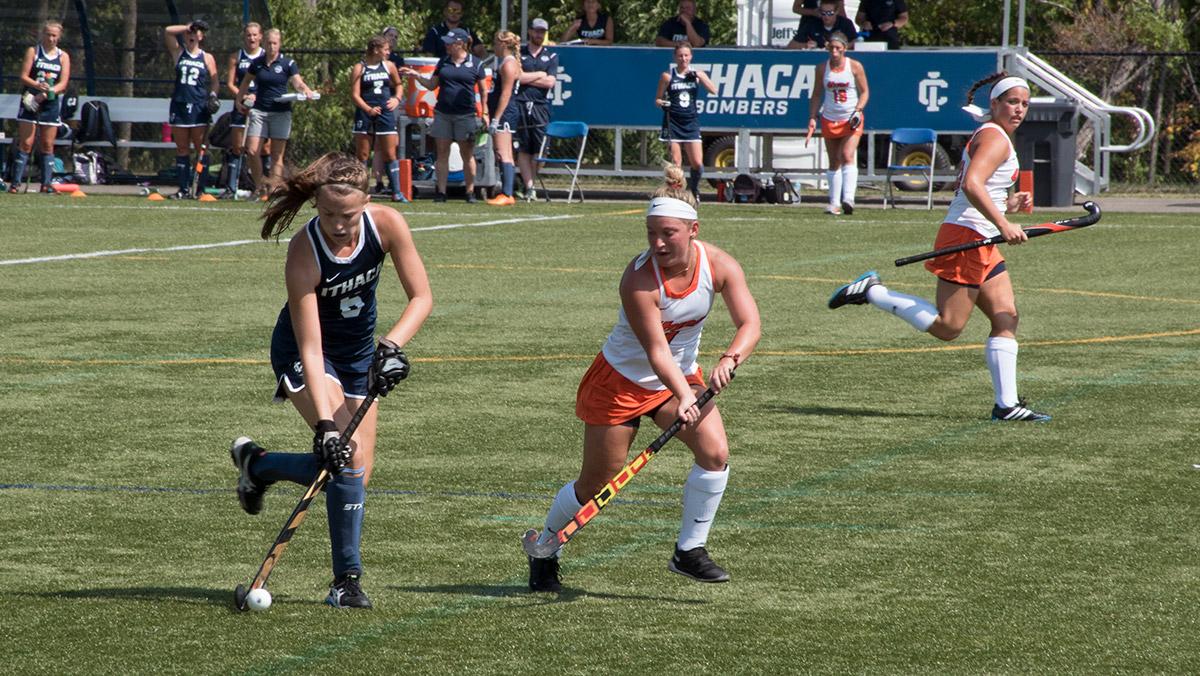 ASH WILLIAMS/THE ITHACAN
Junior forward Michaela Donohue runs down the field Sept. 10 against Utica College. Donahue had one goal and one assist during the Bombers 3–0 win.
By Cam Fuoti — Contributing Writer
Published: September 10, 2016

The Ithaca College field hockey team picked up its first win of the season during its home opener Sept. 10 at Higgins Stadium. The Bombers defeated Utica College 3–0.

Sophomore backs Maddie Keppel and Maddy Ryan both played extremely well alongside sophomore Taylor Streko and senior Hannah Gerber. They were able to hold the Pioneers scoreless through first half.

Keegan-Twombly would go on to score her second goal of the game later in the second half.

“It was a tough game,” head coach Tracy Houk said. “I’m really proud with the adjustments we made at halftime. The conditioning paid off and we generated the attack.”

Keegan-Twombly said the team came together in the second half to start its conference schedule with a win.

“It was our first Empire 8 game, and it was an important win,” Keegan-Twombly said. “I felt the connection and we all started to click in the second half. Katie Lass had a great game in goal and gave us a shutout.”

Donohue said the Bombers will use this game to help them move forward in the season.

“With an Empire 8 game, it’s important to have momentum,” Donohue said. “We’re looking to continue this momentum into all future games.”

The Bombers, who are now 1–2, look ahead toward SUNY Oneonta in an out-of-conference matchup Sept. 13 at 4 p.m. at Higgins Stadium.

Field hockey lost its second game of the season to SUNY Cortland Sept. 7.

The Ithaca College field hockey team lost to University of Rochester 4–1 in its season opener Sept. 1.