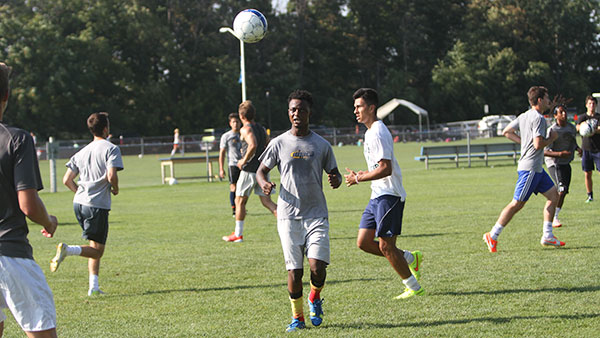 Despite his talent with the ball and love for the game stemming from a part of his childhood growing up in Ghana, joining the men’s soccer team sounded like a challenge for sophomore midfielder Aziz Farouk one year ago.

“I was actually good when I was in Ghana, played in some couple of good teams,” Farouk said. “I was really young, but I stopped when I moved to the U.S.”

A year ago, when Farouk walked to the turf next to the Athletics and Events Center to try out with the team, he was unsure about the outcome. He had not played on a team for the last five years, and his body was not in good shape. With that in mind, he said he was initially apprehensive as to what he wanted to do.

“I was not thinking about playing for soccer in the school,” Farouk said. “But then I was like,  ‘Hey, just go and try out. I have passion for it, so just let me go and try out.’”

Though at the time Farouk had not played for five years, he said he had been in love with soccer since he was a kid living in Ghana. Moving back and forth between New York City and Ghana growing up, Farouk discovered his passion for soccer overseas.

While in Ghana, Farouk played for local club Lazio in the city of Kumasi, and as a midfielder he had a great impact on the team. Farouk said the way soccer is taught in Ghana made him a better player.

“Playing in Ghana helped me,” Farouk said. “Coaches are straight there. The [coaches] make you practice hard and respect everyone.”

Farouk was unfit when he joined the team, however, head coach Andy Byrne said he knew how to recognize a talented player, and it did not take long to conclude that Farouk’s skills would be an important asset for the Bombers.

“Aziz has good technical ability from the kind of soccer they play growing up [in Ghana],” Byrne said. “He played a lot in the streets, and so he had good technical abilities in terms of receiving the balls and dribbling. He has good athletic potential, he’s gotten a lot bigger and stronger in the course of the year.”

One year after that sunny afternoon on the turf, Farouk has become a valuable player for the Bombers and a reliable asset both as a midfielder and, if necessary, as a forward.

During his freshman year, Farouk was used as a practice player for the first few weeks. While on the practice squad, he continued to condition himself to get in shape, and when Byrne saw his progress, he played him in 11 games. Now in playing shape to begin the new season, Farouk said he feels confident about how the team will perform.

“I like the team better this year [because] of more good players coming in,” he said. “Last year [Byrne] had too much on him: a lot of players and short of time to practice because we have classes. But this year, we have an assistant coach called Patrick Ouckama, so we divide the team in defenders and attackers so we get time to practice better.”

Ouckama said Farouk is not just shifty and unpredictable to defenders, but is also willing to learn from Byrne and his staff. Ouckama believes this desire for improvement makes him the kind of player that every coach wants to work with.

“He is constantly trying to improve his ability, asking tactical questions and refining his technical ability,” he said.

“Aziz’s best skill is his ability to hold up the ball,” Glass said. “He’s a bigger, more physical presence that we have up top, and he has no problem receiving the ball with his back to goal and holding the ball up to let the midfield join the play.”

Given Farouk’s lack of experience with collegiate soccer, Glass said he still needs to refine his game, but it will happen with more playing time.

“His overall tactical awareness is something he can improve,” he said. “He’s only been playing organized soccer for a few years now, so that’s something that will come in time.”

His previous experience in Ghana makes Farouk a non-traditional college soccer player, but Byrne said this is exactly why it is important to have a guy like him on the team.

“I think his view on the game is different than someone who grew up in our structure,” Byrne said. “As he sees the game, it is less coaching and more kind of having to play and maybe survive in an environment created by the players.”