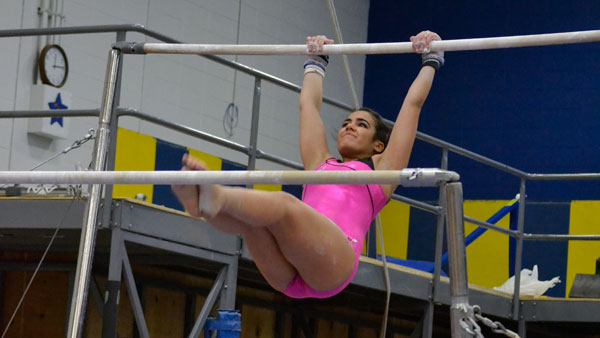 The men’s basketball team was able to split its weekend games Feb. 14–15 with a 69–68 loss against Elmira College and an 86–84 win against Utica College.

Against the Soaring Eagles, the Bombers held a four-point halftime lead. However, Elmira made a second half push and hit a game-winning layup with about three seconds remaining. Senior forward Frank Mitchell and senior center Tom Sweeney each finished the game with 16 points for the Bombers.

The Blue and Gold came away with a victory against Utica on Senior Day. Mitchell hit the game-winning layup with four seconds left to play to take the lead. Sweeney blocked a final attempt by Elmira to secure the win. Mitchell and junior guard Max Masucci each had 20 points in the win. Masucci also had six 3-pointers in the game.

The 7–17 Bombers finish their season at 4 p.m. Feb. 22, facing the Alfred University Saxons in Alfred, N.Y.

The wrestling team lost No. 9–ranked Wilkes College 23–9 on Feb. 14 in Wilkes-Barre, Pa. Junior Kristopher Schimek reached 100 career wins with a victory in the meet. Schimek, senior Dominick Giacolone and freshman Matt Booth were the only members of the Blue and Gold to win in their respective weight classes.

Schimek has won 27 matches by major decision at 165 pounds this season. Giacolone came back from an injury during his match and defeated his opponent Michael Fleck by a 3–2 decision. Booth improved his record to 17–9, with a 6–2 victory by decision.

Losses from the meet came from junior Anthony Cabrera at 125 pounds, sophomore Eamonn Gaffney at 149 pounds, freshman Carlos Toribio at 174 pounds and senior Shane Bartrum at 285 pounds. The South Hill squad also lost one point during the match for unsportsmanlike conduct.

The Bombers return to action in their last dual-meet of the season at 7 p.m. Feb. 19 in Ben Light Gymnasium against No. 5–ranked SUNY Cortland.

The 20–4 women’s basketball team finished off the weekend Feb. 14–15 with two victories against Empire 8 Conference teams. The two wins extended the Bombers’ winning streak to 12 games.

The Blue and Gold walked out of Ben Light Gymnasium on Feb. 14 with a 63–57 victory against the Elmira College Soaring Eagles. Senior guard Kathryn Campbell led all Bombers with 17 points, while senior Jenn Escobido scored 13 points and had 10 rebounds. The Bombers had trouble controlling Elmira senior Jessica Zoltowski, who led the Soaring Eagles with 27 points.

But, the South Hill squad hit three 3-pointers in the first half and opened up an 18-point lead at halftime. Despite a late Elmira surge, the Bombers held on for a six-point victory.

The last home game for the Bombers came Feb. 15 when they defeated Utica College by a score of 64–53. In honor of Senior Day, head coach Dan Raymond altered the usual starting lineup and started all of the seniors on the team: Kathryn Campbell, Jenn Escobido, Mary Kate Tierney, Renee Metzger and Elisabeth Wentlent. The seniors combined for 40 points and 17 assists. Junior forward Geena Brady tied Jenn Escobido with 13 points scored.

The Blue and Gold will face Alfred University for the final game of the regular season at 4 p.m. Feb. 22 in Alfred, N.Y.

The men’s and women’s track and field teams competed Feb. 15–16 at the Ithaca Bomber Invitational and Multi in Glazer Arena, which was the last indoor meet at home for both squads.

Senior Brendan Wilkins had the lone highlight in the field events, as he finished third in the high jump with a leap of 1.94 meters.

In the field meets, freshman Natalie Meyer won the high jump with a height of 1.64 meters.

Both teams will be back in action Feb. 22 at Cornell University’s Deneault Invitational in Barton Hall.

The men’s and women’s swimming and diving teams competed at the six-team Ithaca Invitational on Feb. 15 in the Athletics and Events Center Pavilion.

The men opened the meet with a first-place finish in the 200-yard medley relay. The team of freshmen Eddie Mostert and Gregory Markert and sophomores Jon Yoskin and Jeremy Kingsley clocked in a time of 1:39:36.

Senior Charles Thomas had a dominating day, securing second place in both the 100-yard and 200-yard breaststroke. He finished in times of 1:01.71 and 2:17.16, respectively.

On the women’s team, junior Christine Zulkosky took first in the 100-yard butterfly with a time of 1:00.82.

The Bombers will begin the postseason hosting the 2014 Upper New York State Collegiate Swimming Championships at the A&E Center. The event is four days, beginning at 10 a.m. Feb. 19 and concluding Feb. 22.

The gymnastics team was able to secure its first win of the season, moving their record to 1–8 Feb. 15, scoring its highest team score so far at the Harriett Marranca Memorial Invitational against Rhode Island College and SUNY Brockport in Ben Light Gymnasium.

The annual meet was in honor of Harriet Marranca, founder of the gymnastics program. The team also wore pink to raise awareness for breast cancer.

Sophomore Lara Haberle led the Bombers on the beam with a career-best score of 9.550, which tied her for first with freshman Jennifer Sklenar of Brockport.

Sophomore Megan Harrington was the only all-around gymnast for the Bombers at the meet. Harrington scored a 9.175 on the vault to place ninth overall, a 9.300 on the bars, an 8.750 on the beam and a 9.525 on her floor exercise. Harrington placed first in all-around with a total score of 36.750.

The Blue and Gold will be competing at 11 a.m. March 1 in Ben Light Gymnasium to face SUNY Cortland.