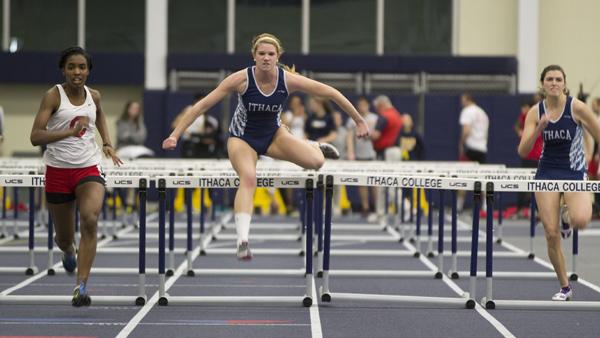 The men’s basketball team might have had feelings of deja vu Feb. 7–8 after home losses to Nazareth College and St. John Fisher College by 12 and 10 points, respectively.

In the tilt against the Golden Flyers, senior Frank Mitchell scored 25 points, which tied his third-highest scoring output of the season. Junior Keefe Gitto notched his first career double-double as a member of the Blue and Gold. However, the standout performances were too much for the Bombers to handle, as they fell to Nazareth by a final of 76–64.

In the other game, the Bombers had trouble defending St. John Fisher’s sophomore guard, Chaz Lott, who led the scoring with 29 points. Senior Tom Sweeney, juniors Gitto and Max Masucci and sophomore Brad Johanson had at least 10 points for the Bombers. But it was not enough to beat the Cardinals, who won an 81–71 contest at Ben Light Gymnasium.

The pair of losses sends the South Hill squad to a 2–7 record at home and 6–16 for the season, with three games remaining this year.

The South Hill squad will return to action against Elmira College at 6 p.m. Feb. 14 in Ben Light Gymnasium.

The men’s track and field team competed at the Bomber Quad Meet on Feb. 7 in Glazer Arena. The men’s team had a pair of Eastern College Athletic Conference qualifiers and had three first-place finishes.

Junior Rashaad Barrett was the runner-up in the 60-meter dash after finishing the race in an ECAC qualifying time of 7.08 seconds. The Bombers’ 4×800 relay team of junior Dennis Ryan, sophomore Larkin Bohanan and freshmen Chris Gutierrez and Sean Phillips won the event in 8:07.01 to reach the ECAC standard.

The women’s track and field team competed at Boston University’s Valentine Invitational from Feb. 7–8 and at SUNY Brockport’s Golden Eagle Invitational on Feb. 8.

Both squads will return to competition at 10 a.m. Feb. 15–16 at the Bomber Invitational in Glazer Arena.

The women’s basketball team won both of its games Feb. 7–8, tying it with Hartwick College at the top of the Empire 8 Conference standings. The Bombers are riding a 10-game winning streak, with their two most recent wins against conference foes Nazareth College and St. John Fisher College.

The Blue and Gold defeated Nazareth 75–50 behind senior guard Mary Kate Tierney’s 14-point, seven rebound game. Fellow senior Kathryn Campbell had a well-rounded performance, as she had 11 points, eight assists and five rebounds. The South Hill squad hit seven 3-pointers and held its opponent to less than 10 percent shooting from behind the arc. The Bombers had 37 points from bench players.

The next day, the Bombers defeated St. John Fisher by a score of 77–43. Tierney and Campbell reached double-digit points again and were joined by freshman forward Erin Ferguson. The Bombers shot nearly 46 percent from the field, while limiting St. John Fisher to 30 percent.

In the second match of the day, the Bombers built a quick lead with wins in the first four weight classes. Kaishian won by decision, Gomez by tech fall and Wahba by major decision. Gaffney also came back to win by decision.

In the final match, the Bombers had victories in all but one bout to claim victory against the host Oneonta. Gomez, Wahba and Schimek all won for the third time. Gomez won by pin, Wahba by major decision and Schimek by pin.

The Bombers return to action on the road at 7 p.m. Feb. 14 against the No. 9–ranked Wilkes College Colonels.

The gymnastics team competed at the Cornell Big Red Invitational on Feb. 8 against Cornell University and Southern Connecticut State University. The Bombers performed well individually but ended up placing third with a final overall score of 171.825.

Freshman Alexis Mena had the highest scores for the Blue and Gold for her beam and floor routines, scoring 9.225 on the beam and 9.075 on the floor.

Seniors Shilanna Gallo and Rani Jacobson both led the team in their events at the meet. Gallo scored 9.325 on the uneven bars placing eighth overall, and Jacobson scored 9.350 on the vault, placing 10th overall.

The Bombers will return home to face SUNY Brockport and Rhode Island College at 11 a.m. Feb. 15 in Ben Light Gymnasium.