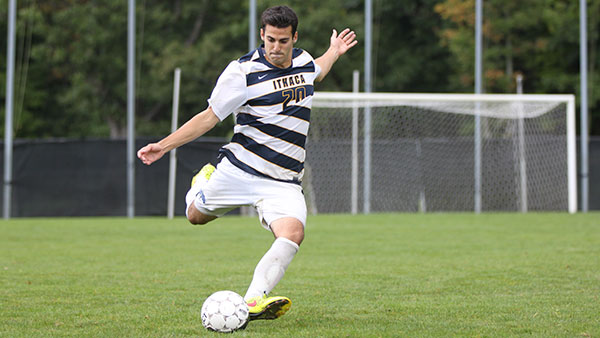 Yana Mazurkevich/The Ithacan
Senior midfielder Brandon Glass kicks the ball during the men’s soccer team’s 1–1 draw over SUNY Geneseo on Sept. 13 at Carp Wood Field. The Bombers are 0–3–1 to begin the season.
By The Ithacan — Ithacan Staff
Published: September 17, 2014

The men’s soccer team earned its first point of the season on Sept. 13, tying SUNY Geneseo 1–1 after a scoreless overtime at Carp Wood Field.

The Knights struck first with a goal in the 20th minute after junior back Chris Kanaval headed in a cross from senior midfielder Patrick Gunty. However, the Blue and Gold finally broke through in the 48th minute after junior forward Jordan Filipowich found senior forward Casey Williamson, who hammered a shot from the top of the box home for his first goal of the season.

Junior defender Cody Kiss said he was pleased with the team’s result.

“I thought it was a good performance,” Kiss said. “We finally gave it a physical battle, which was something I thought we’d been lacking in.”

On Sept. 14, the Blue and Gold fell 2–0 against SUNY Cortland in Cortland, New York. The Red Dragons scored on a header off of a throw in in the opening minute and added another goal on a penalty kick in the 38th minute.

The Bombers are now 0–3–1 on the year and will play their next game on Sept. 20 against Alfred University at Carp Wood Field.

The women’s soccer team split a pair of games in the Upstate Collegiate Cup Sept. 13–14 , bringing the squad’s overall record to 4–1. The Sept. 13 match saw the Bombers concede their first loss of the season, 2–0, to the University of Rochester. The Yellowjackets scored goals in both halves to secure the victory. The loss pushed the Bombers into the tournament’s consolation game against SUNY Cortland, which had fallen to William Smith College 3–1.

The Sept. 14 game between the Bombers and Red Dragons was hard fought and scoreless through the first half of play. The South Hill squad managed five shots in the first half, forcing Cortland sophomore goalkeeper Tyler Julian to make three saves, while the Red Dragons managed three shots.

With less than 10 minutes left in regulation, sophomore forward Jess Demczar tallied the game’s lone goal on a free-kick, leading the Bombers to a 1–0 victory over Cortland. The team recorded its fourth clean sheet in five games. Junior goalkeeper Beth Coppolecchia said the Bombers’ mindset heading into the tournament was to continue to prove their worth against opponents.

“Everyone was just ready to get back out on the field and show everyone Bomber soccer is here to win,” Coppolecchia said.  “We had good chances to finish yesterday, and we wanted to focus on that and bring those to the game against Cortland today.”

The South Hill squad plays its next game against Alfred University on Sept. 20 at Carp Wood Field.

The volleyball team kept rolling this weekend, as it won two out of three games at the Ramapo Roadrunner Invitational from Sept. 12–13 in Mahwah, New Jersey. The Bombers have improved their record to 8–3.

The Blue and Gold’s impressive weekend began on Sept. 12 when the Bombers took on the College of Mount Saint Vincent, defeating the Dolphins in straight sets 26–24, 25–9 and 25–15. Freshman Joelle Goldstein had a strong performance, racking up 13 kills and scoring 13.5 points. Junior captain Dylan Gawinski Stern had nine kills, while scoring 10 points.

On Sept. 13, the Bombers lost to the host and hometown favorite Ramapo College in four sets, but bounced back a few hours later by beating Saint Joseph’s College in straight sets to finish the tournament. Goldstein said the team did not have its best weekend, but had great teamwork in its wins.

“Every single person contributed,” she said.  “Even though we weren’t playing like us, we proved how tenacious we are and that we never gave up.”

On Sept. 16, the Bombers opened up Empire 8 conference play with a 3–2 win over Elmira College. They exchanged sets before defeating the Soaring Eagles 16–14 in the decisive set.

The young Bombers will look to continue their success on Sept. 20 when they take on conference opponents Hartwick College and St. John Fisher College in Oneonta, New York.

The men’s and women’s cross-country teams had their second race of the season Sept. 13 at the Saratoga Invitational in Saratoga Springs, New York.

In the men’s event, Williams College senior Colin Cotton finished first with a time of 18:46 in the 6k event. Junior Sawyer Hitchcock led the Bombers, placing 11th overall in 19:07 out of 221 total runners.

Freshman Tim Chappell ran his first race this weekend, finishing 38th overall, and said he anticipates a great season ahead for the Bombers.

For the women’s event, Stevens Institute of Technology junior Amy Regan ran for 17:07 to finish first overall in the 5k race. Junior Hannah Wright ranked 25th overall, giving the Bombers their best score with a time of 18:30.

The men’s team as a whole finished fourth of 14 and the women’s finished fifth of 14.

The Bombers will be on the road again Sept. 20 in Rochester, New York, to compete in the Rochester Yellowjacket Invitational.

In its only game of the week, the field hockey team fell short against rival SUNY Cortland 3–1 on Sept. 10 in Cortland, New York. Junior back Caitlin O’Brien was the only Bomber to find the back of the net on the day, scoring in the opening five minutes of the game off a deflection. The goal was O’Brien’s first since the Blue and Gold’s home opener last year against Wells College.

Cortland dominated in shots, outshooting the Bombers 16–5, with two of the Red Dragon’s three goals coming off penalty corners. The South Hill squad will look to improve on its 1–3 record by tying in new defensive formations with ones previously learned. Senior captain and back Sarah Pfeifle said adding upon a defensive core from last year is the key to winning important games.

“We are working out details in the new defensive formations that we have integrated this year into our former strategies,” she said. “We will capitalize using all of these elements in future games to bring home significant victories.”

Looking to secure their second win of the season, the Bombers will face St. John Fisher College on Sept. 20 in Rochester, New York.

In its second contest of the season, the golf team captured its fifth straight Empire 8 Championship Sept. 13–14 after posting a team score of 640. At the end of the first round, the Bombers shot 323, which allowed them to enter day two of the championships with a significant lead ahead of the competition.

Senior Sharon Li recorded a three-peat after she had won the tournament on an individual basis the last two years. Li shot an impressive 76 in the first round and a 75 in the second round, allowing her to finishing the championships with a total score of 151, earning first-place honors.

“I am very happy with how the team played today,” Baker said. “[Shooting] 320 is one of our goals for the year, and we had shot a 317 today with solid scores from everyone.”

The South Hill squad will leave New York state for the first time this season from Sept. 20–21 when it tees off in the Mount Holyoke Invitational at The Orchards Golf Club in South Hadley, Massachusetts.

Against Elmira, the Bombers won five of six singles matches, all in straight sets. In doubles play, the Blue and Gold won two of three games. Sophomore Haley Kusak led the strong performance by defeating Elmira freshman Kimberly Salkin 6–3, 6–3 in the No. 1 singles match.

Playing against Nazareth, the Blue and Gold showed few signs of weakness, as they won all six singles matches and two of their three doubles matches. Kusak and senior Allison Vizgaitis won their singles matches without dropping a game, 6–0, 6–0.

In their next matchup, the Bombers face the Houghton College Highlanders on Sept. 20 at the Wheeler Tennis Courts.