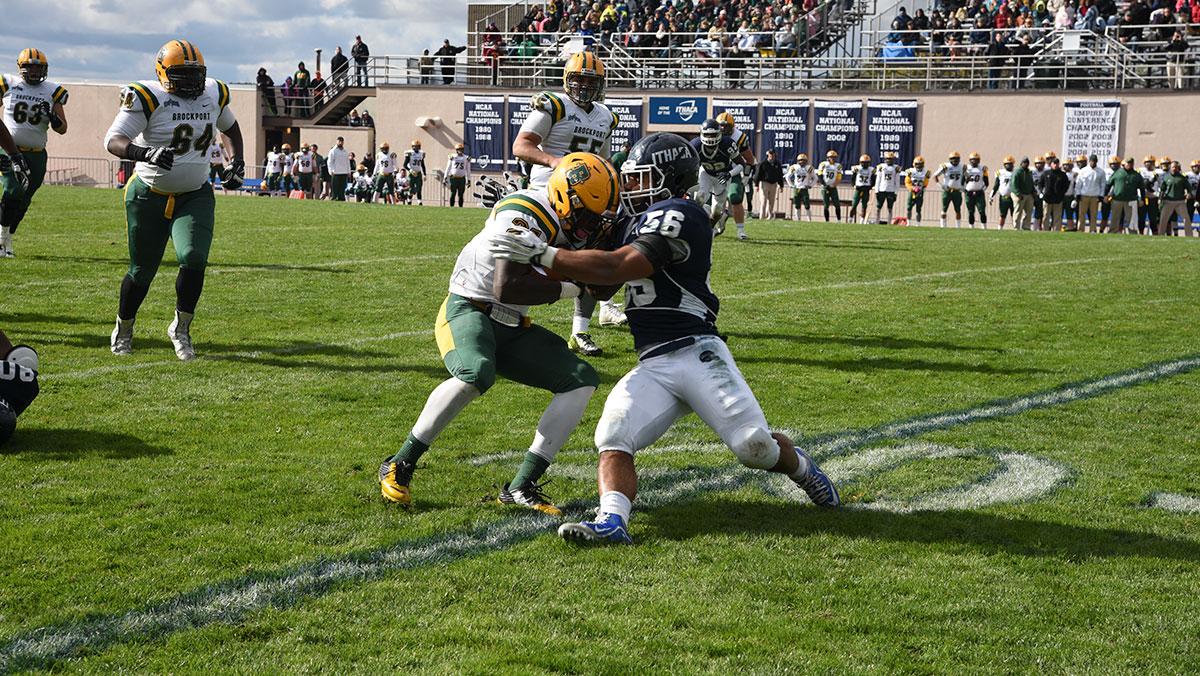 There is an old adage in regard to repetition: Repetition builds reputation.

For the Ithaca College football team, this motto has served as the concrete base for the Bombers’ stronghold in the Empire 8 conference over the years, as well as in Division III football.

Specifically on the defensive side of the ball, assistant coach Mark McDonough has captained stingy, gritty defensive units year in and year out since his hiring as the Blue and Gold’s defensive coordinator in 2010. The past two seasons in particular, McDonough has coached two Bombers’ defenses that ranked in the top 50 nationally in total defense. One ranked No. 46 in 2013, and one ranked No. 32 in 2014.

Through six games of the 2015 season, this train of dominant defensive units appears to be chugging along once again. This time around, however, the 2015 Bombers have cracked the top 30 in the national polls for total defense, as the squad currently ranks No. 50 in Division III.

McDonough said this year’s defense is highlighted by a mesh of personalities from the 2014 defense and entirely new ones.

“When you talk about last year, you had Anthony Domenick, Joe Ricotta, Marc Recio and Chris Williams,” McDonough said. “Their personalities weren’t as extroverted as Logan [Murphy’s], as Malik [Morris’]. And then on the flip side, you have Noah Poskanzer, [Dan] Mancini, Schnayder [Termidor] who were very similar to the group last year. I say people are like snowflakes: Each one’s a little bit different. Just a different mix of guys.”

The staple of the vaunted Bombers’ defense has been the unit’s ability to clog the running lanes for opposing running backs. The defense thus far has only given 67.5 rushing yards per game on average to their opponents, placing them No. 6 in the nation in that category.

The defensive line, specifically seniors Murphy and Tijah Henderson, has been instrumental in this effort. Murphy has lived up to his status as a senior captain for the football team so far, recording 13.5 total tackles for loss, which includes eight sacks in that total.

Henderson said the focus and intensity of the defensive line has tightened week by week.

“We don’t get complacent as a defensive line,” Henderson said. “We know what we expect from each other. With me and Logan being the senior leaders on the team, we are going to be the best unit on the team, and it starts with us. We hold each other accountable. If one of us has a bad game, we all feel like we had a bad game. We feed off each other and strive to get better every day.”

The deep linebacker corps, led by sophomores Dan Loizos and Kenny Bradley, has also excelled at stuffing the run as well as surveying pass coverages.

Loizos, who earned a spot in the starting lineup for the first time in his collegiate career this season on Sept. 5 against Union College, leads the team in total tackles with 60.

Bradley is tied with senior cornerback Morris for the team lead in interceptions with three. Two of those interceptions came in the fourth quarter, which iced back-to-back victories for the Bombers against then-No. 16 Hobart College and Alfred University.

Late fourth quarter heroics has also become a familiar theme for the college’s defense this season. Back in the Bombers’ season-opening victory over the Union Dutchmen, it was Morris who sealed the win with an interception, which he returned 37 yards all the way to the house.

Senior cornerback Ryan Michaels said the unit’s resiliency has been key to these individual clutch moments in games.

“We never die. That’s something that coach McDonough really emphasizes,” Michaels said. “Because we have a lot of depth, he always says, ‘We never die, we just multiply.’ … We just have so many playmakers … So many good guys that are great players, and we just work well together.”

The defense has also been lights out early on in contests. The unit has only surrendered 12 points in the first quarter all year long, which came against Hartwick College during the college’s 47–19 trouncing of the Hawks on Oct. 10.

As for the secondary, the defense has allowed a 106.5 passer rating this season, which is tops in the Empire 8.

Morris said the secondary has shined in shutting down the top receiving threats of opposing quarterbacks, which can be attested to the coaching staff.

“They really set us up with good game plans,” Morris said. “They know who the top threats are going to be. Usually our game plan is to shut them down and let the other people who haven’t been making as many plays during the year beat us.”

Looking ahead, the one area that the defense needs to clean up on is during the middle of games, as the Bombers have been outscored in the third quarter 44–54 so far this year.

McDonough said the defensive unit needs to play sound defense through all four quarters in order for the Bombers to maintain their signature defense.

“I think we need to play complete games,” he said. “We are missing just a couple plays. If we do a better job from a technique standpoint, from an execution standpoint on three or four plays, we win that game.”