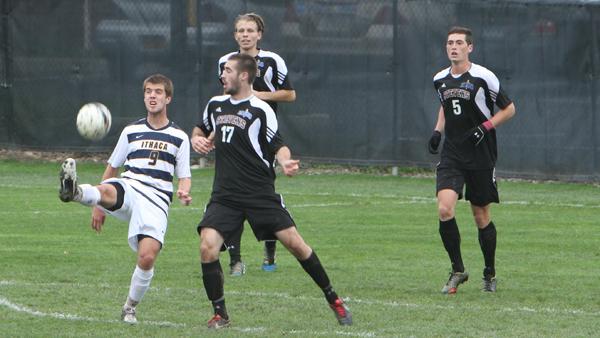 The men’s soccer team may not have gotten a bid into the Division III NCAA tournament, but the Blue and Gold can still call themselves co-Empire 8 Conference champions.

The Bombers won a share of the Empire 8 crown for the first time since 2002 after a 0-0 draw with Stevens Institute of Technology on Saturday. With both teams guaranteed “co-champion” status, the game went on to penalty shots to determine who received the conference’s automatic bid to the NCAA Division III Tournament. The Ducks went on to win 3-2 in the penalty kick shootout to move on to the first round of the national tournament Saturday.

However, the South Hill squad ended Stevens’ 14-game win streak and is now one of three teams to hold the Ducks scoreless this season.

The Bombers’ captains said they are ecstatic to be able to return some hardware to South Hill and wear their Empire 8 championship T-shirts with pride. Senior back Dan Shirley said one of the best parts of winning a share of the conference title is seeing how much the squad improved this season.

“To see how our team was when we first came here and how we progressed to the team we have now, it’s really accomplishing to see such a great group of kids earn this [championship],” Shirley said.

Shirley also said seeing the team evolve from a group of individuals into a family has been rewarding.

“We didn’t have that team mentality before,” Shirley said. “These accomplishments come few and far between, and to see this team, this young group of guys, achieve this is the best feeling in the world.”

The Bombers featured a young squad this season with only five upperclassmen on the roster. At the beginning of the season, senior captains Ryan Norland, Shirley and his brother, Jack Shirley, instilled hard work by leading through example. After many hours of intense workouts and pushing each other to play their best, the players can call themselves champions.

Freshman goalkeeper Kenny Chapman said having his class be able to make an impact this fall is a reflection of the coaches and the seniors.

“It takes a lot for freshmen to come into a new system and play as well as they can,” Chapman said. “All three of our seniors were tremendous leaders. They did a great job of getting us prepared and sharing their knowledge with us.”

Jack said one of the things he will remember the most this season is the camaraderie the team had and how much of an impact the players on the bench made.

“I’m really proud of the way some of our guys on the bench supported our starters,” Jack said. “They didn’t get as much playing time, but the key to our success was those kids being so supportive.”

After finishing with a 7–5–6 overall record, the Bombers were able to make a huge turnaround compared to the 2011 campaign, when the team finished 4–10–1. The seniors have stressed to the players returning next year that if the team wants to keep improving and reclaim the Empire 8 crown, they must put in the time during the offseason.

“They encouraged us to become gym rats, because DIII soccer is a physical game,” Chapman said. “Everyone on this team can get stronger. There’s no one that can be content with how strong and fast and fit they are, so off-season is where we’re going to get most of it done.”