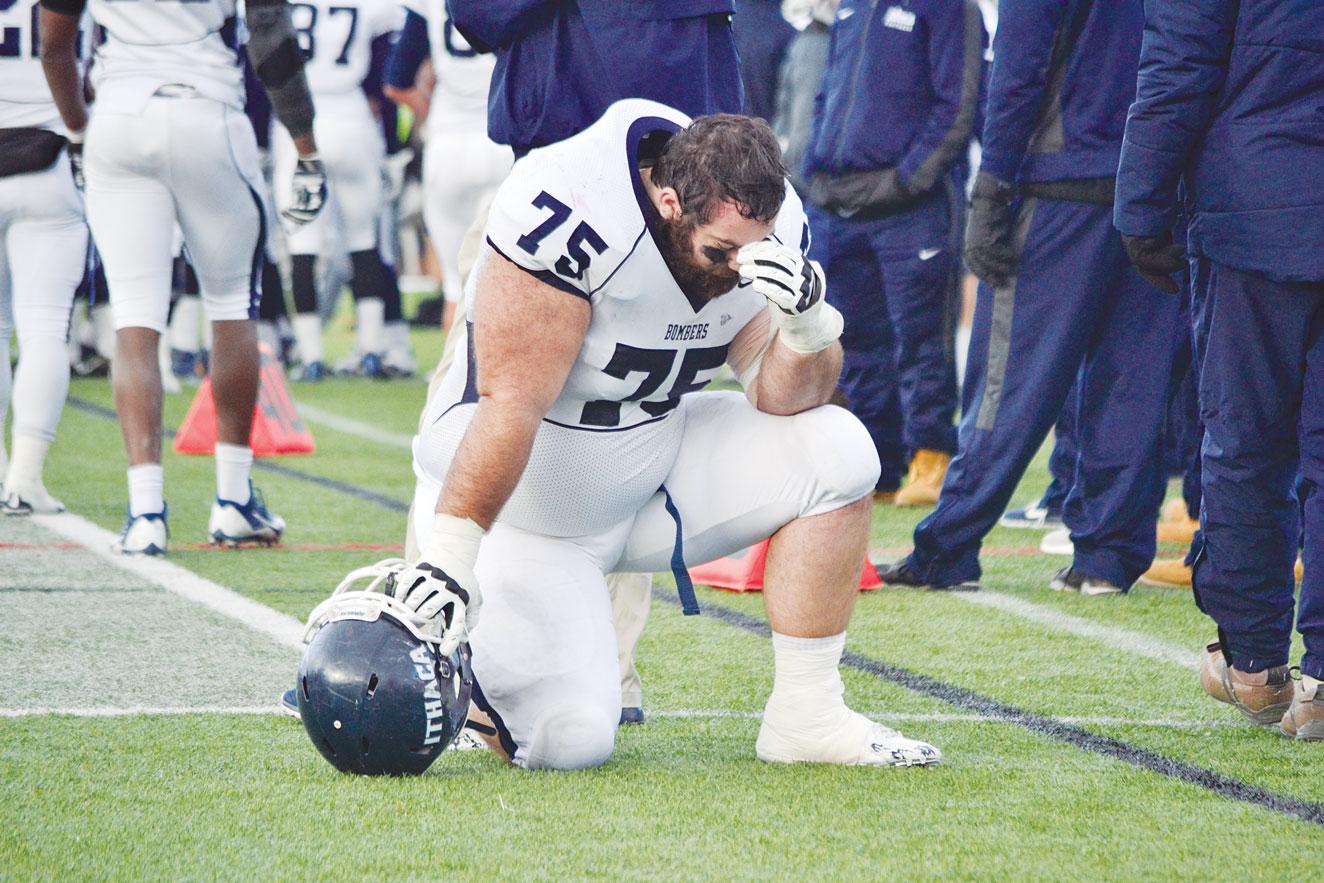 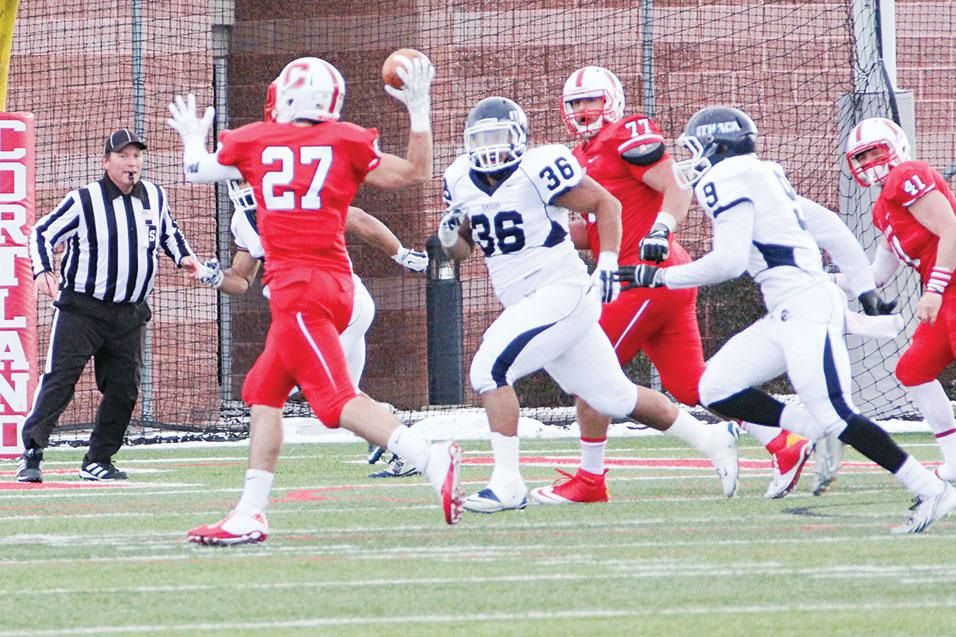 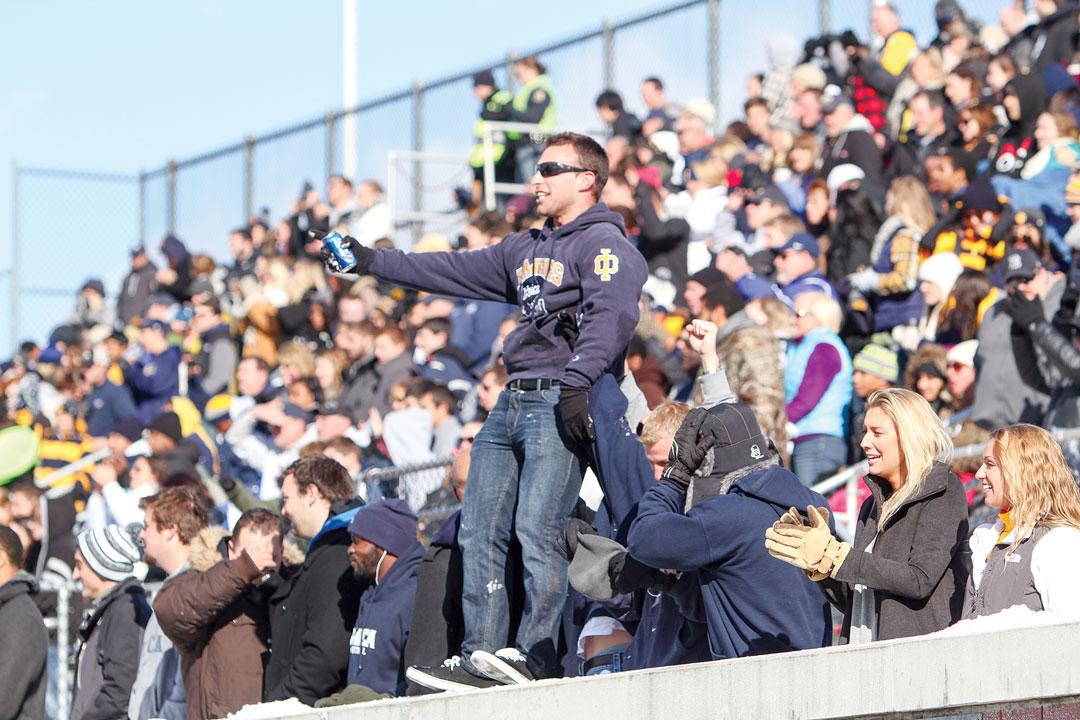 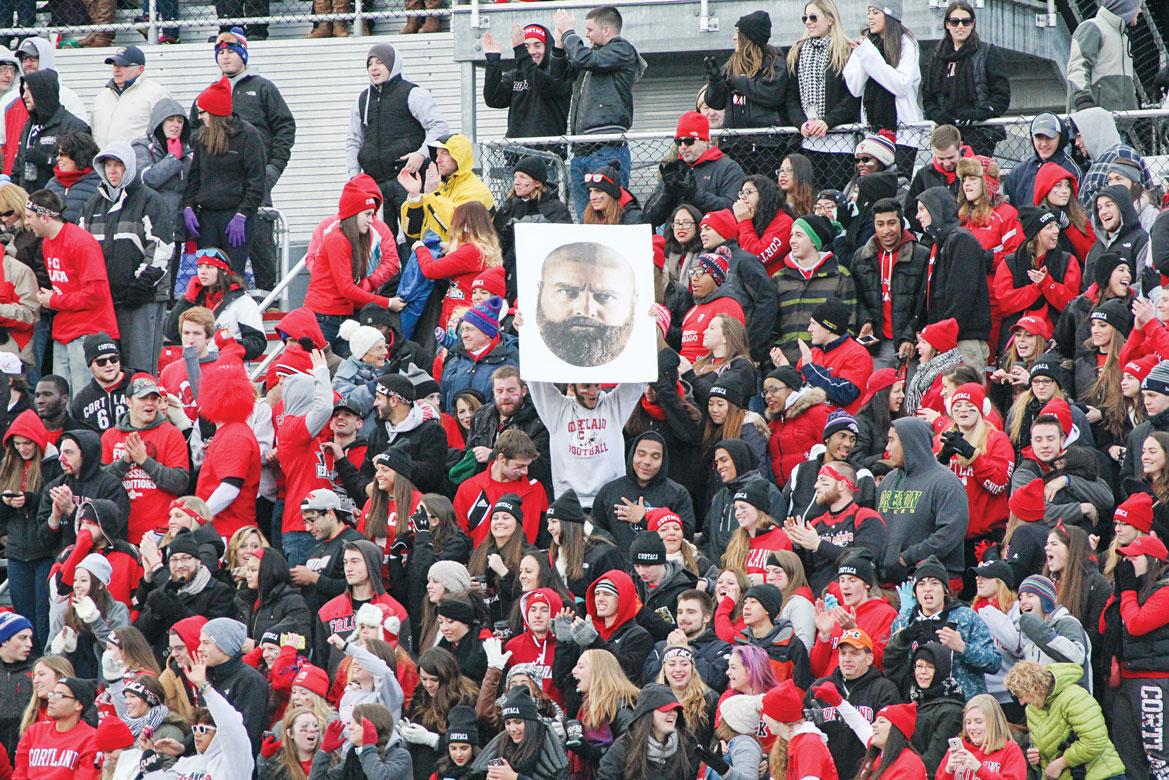 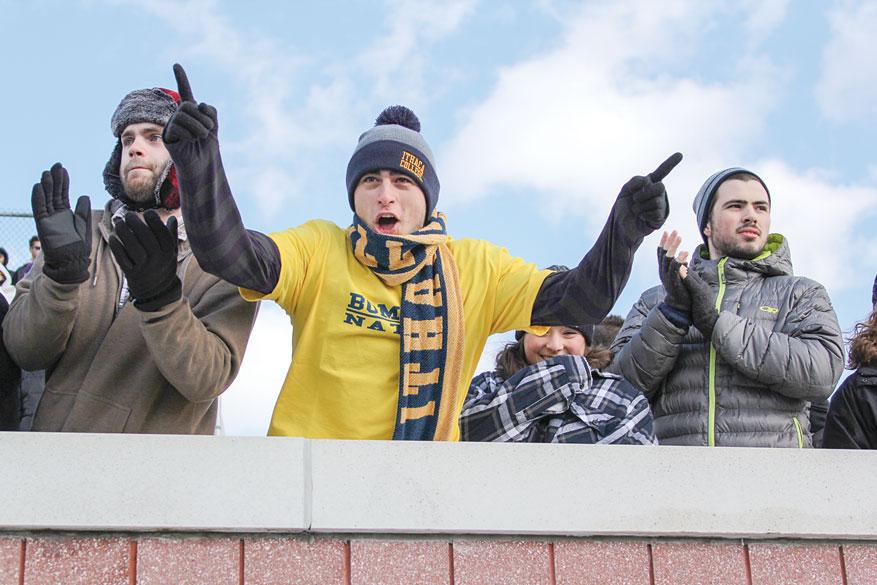 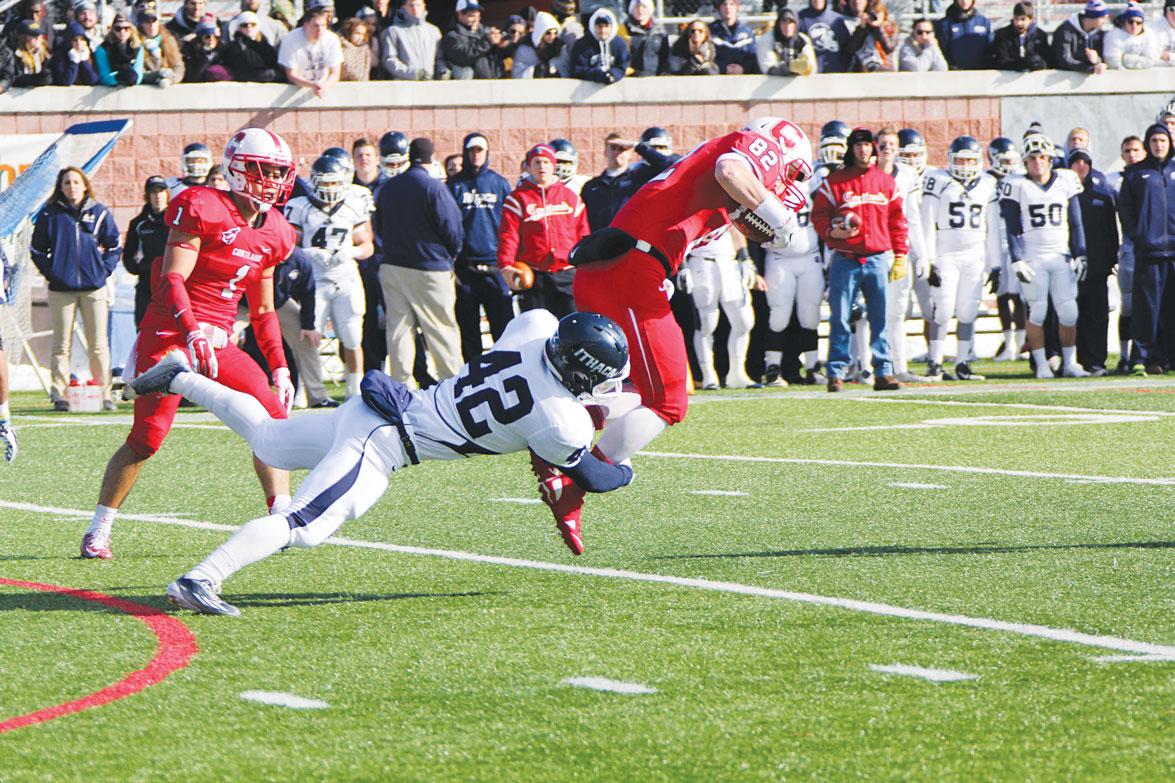 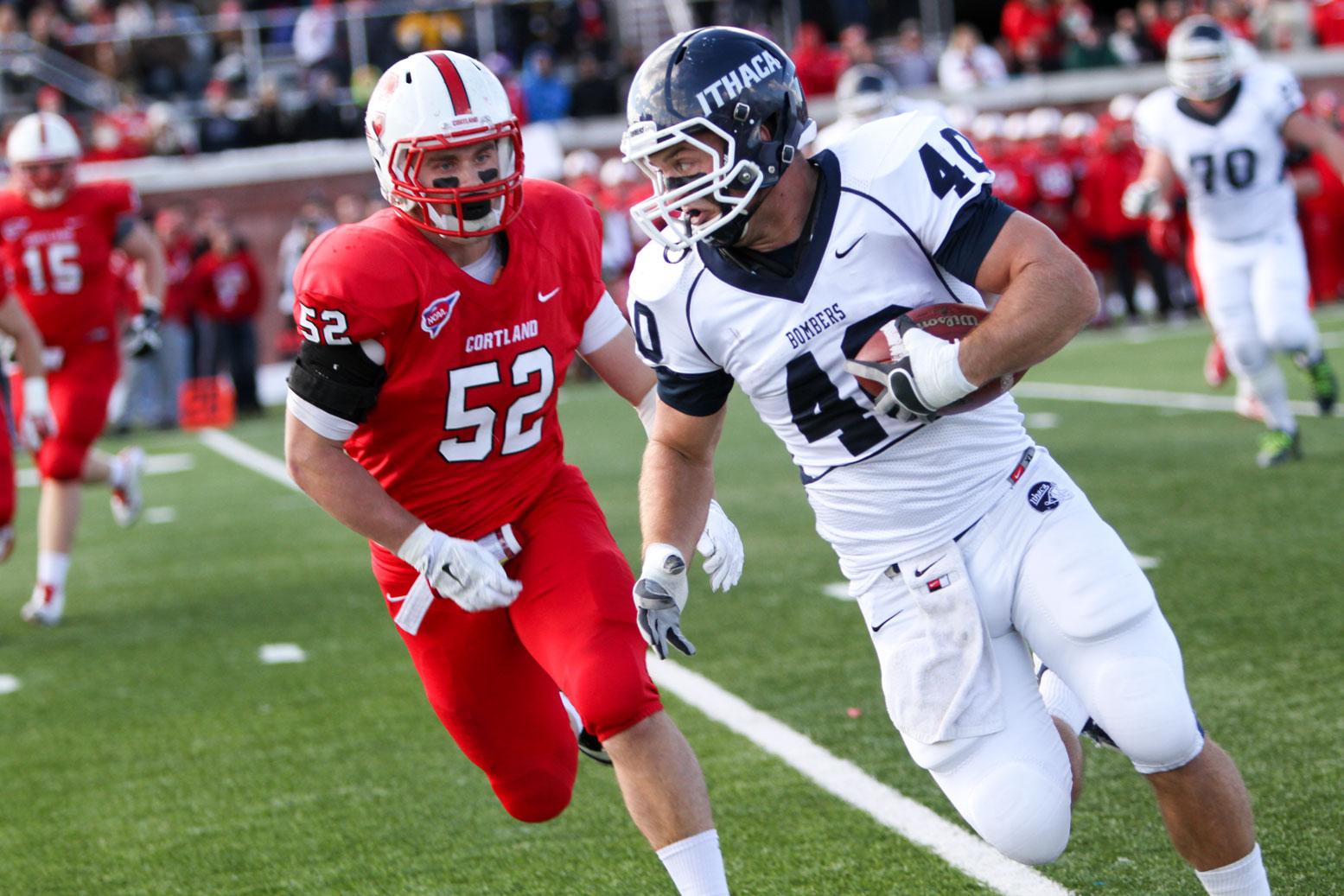 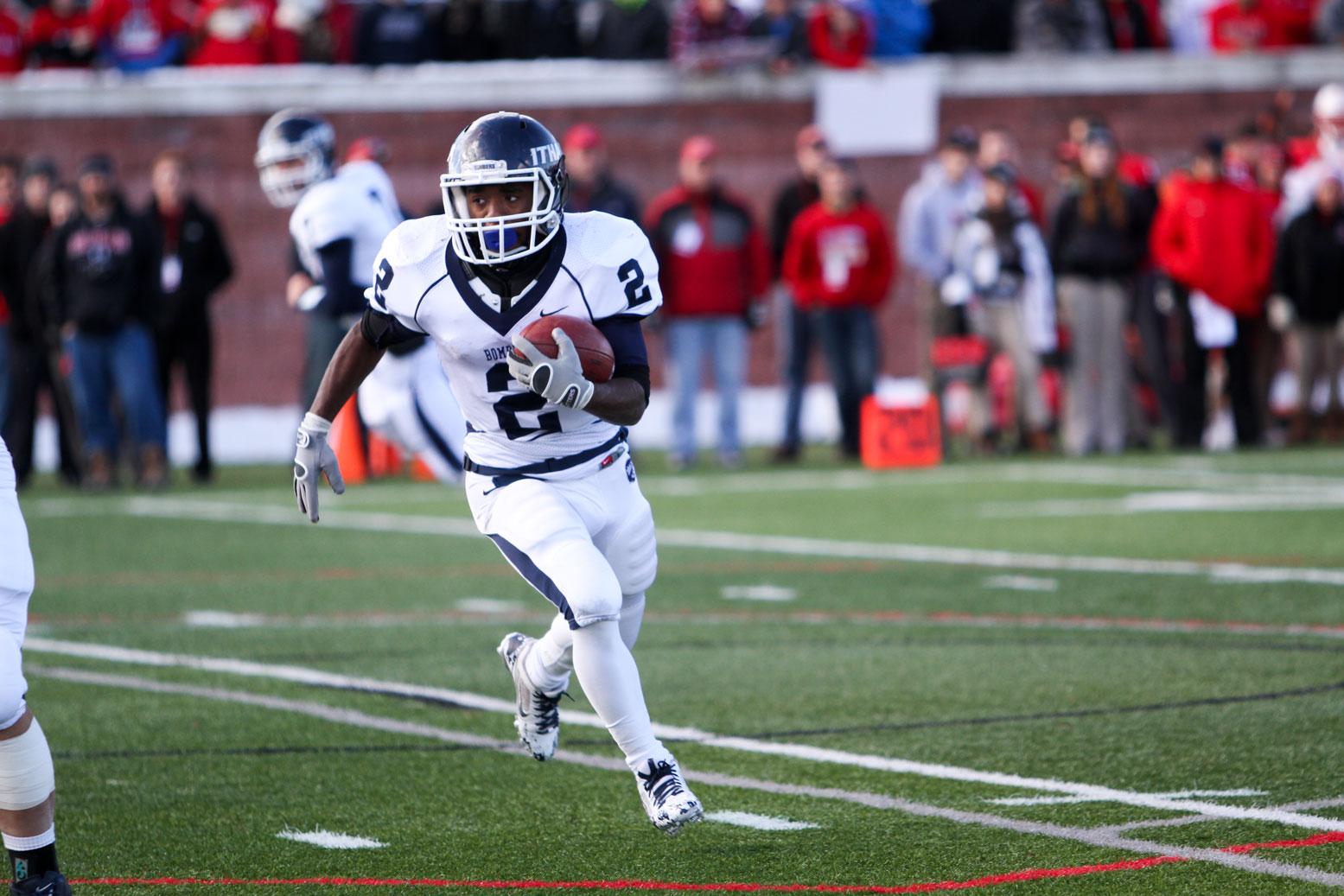 <
►
>
Senior offensive lineman Andrew Benvenuto reflects on the outcome of the Bombers’ performance in the Cortaca Jug. The team fell 23–20 to SUNY Cortland on a last-second touchdown off of a botched field goal attempt on Nov. 15 in Cortland, New York.

Incompetence leads to chaos, chaos leads to chance and chance led to the SUNY Cortland Red Dragons retaining the Cortaca Jug with a 23–20 win against the football team on Nov. 15.

With time running out in the fourth quarter, the Red Dragons (5–5) faced a fourth and goal at the Bomber four and needed to scramble on sophomore kicker Shane Cronin and junior holder Luke Hinton for a game-tying field goal attempt. Hinton was nowhere to be seen and did not run on the field for 15 seconds. As he readied himself with six seconds remaining, the snap from backup sophomore longsnapper Matthew Goodman was low preventing an attempt at the field goal. Hinton picked up the ball, rolled left and found sophomore wide receiver John Mannix in the end zone for the game-winning touchdown as time expired. Bomber head coach Mike Welch was at a loss for words.

“I thought I had seen everything,” Welch said. “It was being handed to us and we didn’t take it.”

The Bombers lost a game they never trailed in. After a 48-yard punt return by senior cornerback Sam Carney set them up at the Red Dragon 13-yard-line, the Blue and Gold scored on their third offensive play when senior quarterback Tom Dempsey found senior fullback Ben Cary for a 2-yard touchdown. Dempsey had his struggles afterwards throwing two interceptions in the face of steady Red Dragon pressure.

“They’re big and physical and created some problems for me,” Dempsey said. “I don’t know if I could point to anything specific but it created some issues.”

The Red Dragon defense kept the entire team in the game. While the Red Dragons had been outgained by more than 120 yards, they forced the Blue and Gold to settle for field goals on two occasions, most notably late in the fourth quarter with the game tied at 17. Though senior kicker Garrett Nicholson gave the Bombers the 20–17 lead, the difference between the field goal and the touchdown wound up being the reason the Red Dragons’ accidentally won the game instead of tying it. Dempsey noted these instances as pivotal chances to put the Red Dragons away that were ultimately missed.

The Bombers had a final chance to put the Red Dragons away with 2:01 remaining. They had forced the Red Dragons to punt and needed a first down to seal the game. However, the Red Dragon defense stopped three runs, used all three of their timeouts and gave themselves a chance with 1:35 remaining and the ball on their 49-yard-line.

Although the Red Dragons had only managed to gain seven first downs the entire game, they were able to enter the red zone on their second play of the drive, a 35-yard completion from junior quarterback John Grassi to junior wide receiver Jack Delahunty that put the Red Dragons at the Bombers’ 11-yard-line. Junior cornerback Malik Morris forced Delahunty out of bounds on the play, saving a touchdown on a blown coverage.

“Being a flat player, I’m supposed to stop comebacks and curls,” Morris said. “There was no over-the-top coverage and I saw the receiver run a fade and I look back and saw no one there and I just sprinted to get back.”

The minor chaos of a blown coverage paled in comparison to what followed. The Red Dragons ran the ball on three consecutive plays without attempting to stop the clock. It was a familiar script. On Sept. 13, Cortland trailed SUNY Brockport by three with time running out. In the confused madness that has defined the Red Dragons’ season, they took a false start penalty that resulted in a 10-second runoff ending the game. While it is standard practice to prepare for rushed field goal attempts, Morris said he knew something peculiar was going on with this particular attempt.

“They line up in field goal formation and I’m coming off the edge,” Morris said.  “I did not have the same release I had earlier in the game so I knew something was up and I saw a rollout away from me so I tried to chase it down from the back before it was too late.”

The Bombers, at 7–3 overall, are not out of the chaos and the confusion. The South Hill squad will find out who it will play in the first round of the NCAA Tournament on Nov. 16. The team has a relatively weak resume and are within 500 miles of three top-10 teams in the d3football.com rankings. It is maelstrom similar to the one created on the final play of 56th annual Cortaca Jug.