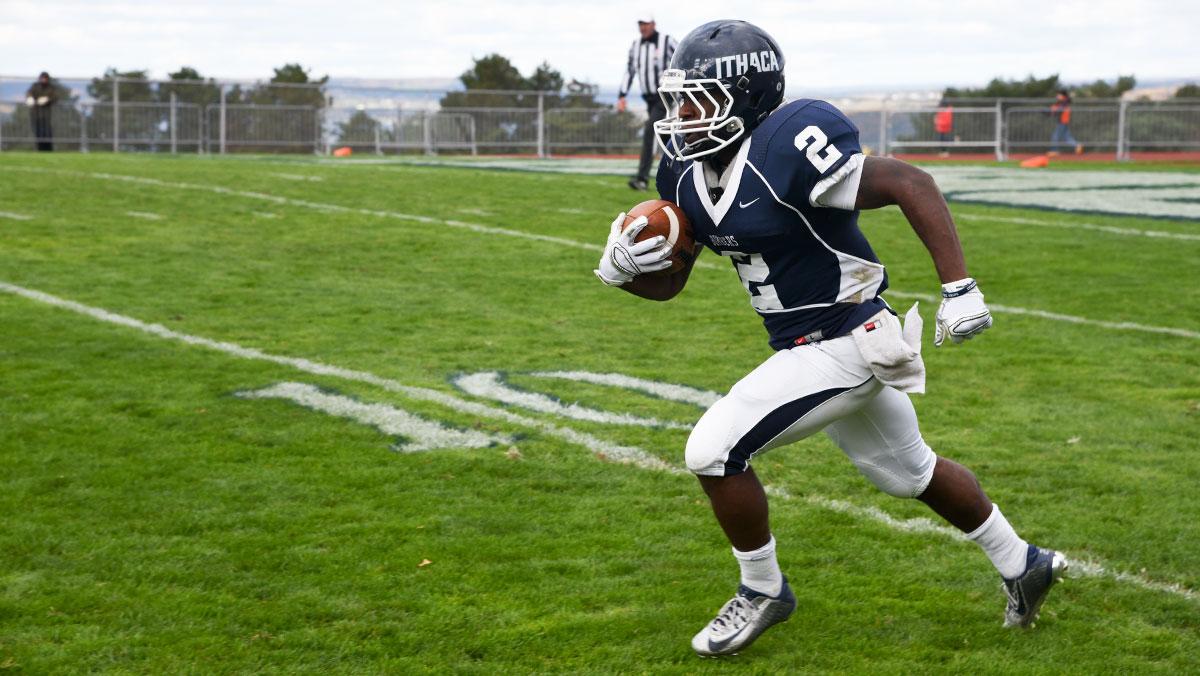 It was a must-win game for the Bombers football team heading into its Oct. 24 game at Drake Field against Morrisville State College. In the end, the Blue and Gold were dominated by the Mustangs by a final score of 24–12.

The only good result that came out of the contest was that senior wide receiver Josh Oliver had a career-high 16 receptions for 134 yards and two touchdown passes, setting the college record for most receptions in a single game.

The two foes had never battled on the gridiron prior to the key matchup, which could have potentially propelled the Bombers after a 27–17 loss against SUNY Brockport in their previous outing Oct. 17. However, the Morrisville offense outplayed the No. 4–ranked defense in Division III, which has carried them for the majority of the season.

The Bombers defense gave up 482 total yards on the afternoon and close to 300 of those yards came on the ground. Senior running back Cristian Pena for the Morrisville Mustangs had 116 yards on the ground and ran for two touchdowns.

Pena said he was pleased with the way his team played in the first matchup with its new Empire 8 rival.

“We played as a team and everyone did what they were supposed to do,” Pena said. “We practiced hard against each other this week. This was a big one against the defending Empire 8 conference champions. We used this week as a challenge.”

In the first quarter, it was sloppy play from both sides as there were multiple three-and-out scenarios, but the Mustangs were in control for most of the first quarter without scoring any points.

However, the second quarter was a different story. Just past the halfway point in the quarter, Pena ran the ball in for a score from 1 yard out to put the Mustangs up 6–0 after a blocked extra point kick.

Going into halftime the score remained 6–0, but Morrisville had already run for 178 yards, which was the most that this Bombers defense had given up all season.

With 4:25 remaining in the third quarter, Pena showed off his arm as he threw a 50-yard bomb down the field as he connected with sophomore wide receiver Marcus Jackson-Conner for the Morrisville touchdown. This put the Mustangs ahead of the Bombers 12–0 after they failed to convert on the two point conversion.

Morrisville took a commanding 18–0 lead just over one minute into the fourth quarter. Pena ran the football for a 9-yard touchdown for his third and final touchdown of the game. Yet again, the offense tried and failed to convert on another two point conversion.

Just two minutes following that score, Morrisville scored another defeating touchdown when junior quarterback Cory Benedetto scored the final touchdown for the Mustangs from 2 yards out. Benedetto also threw for 165 yards on the Bombers defense, despite only throwing the ball 22 times, while running the football 59 times on the frigid afternoon.

The Bombers finally got on the board in the fourth quarter when senior backup quarterback John D’Onorfrio threw a 19-yard touchdown pass to Oliver.

D’Onofrio took over for junior quarterback Wolfgang Shafer midway through the third quarter after Shafer put up a 10–22 stat line with only 90 yards.

In the remaining part of the game, the Bombers threw the ball 38 times. D’Onorfrio went 18–38 for 172 yards with two touchdowns and no interceptions. The second touchdown came when he and Oliver connected on another 11-yard pass late in the fourth quarter.

“It’s a great accomplishment,” Oliver said. “I’m honored to set a record for the team. We just have to keep making plays when need be. We have to just keep moving forward and fix the little mistakes and look to the next game that is ahead of us.”

Shafer struggled mightily through the first three quarters, but there is no telling whether or not he has lost his position going forward.

After suffering their second consecutive loss, the Bombers will return home to look to get back on track at 1 p.m. Oct. 31 against St. John Fisher College on Senior Day at Butterfield Stadium.