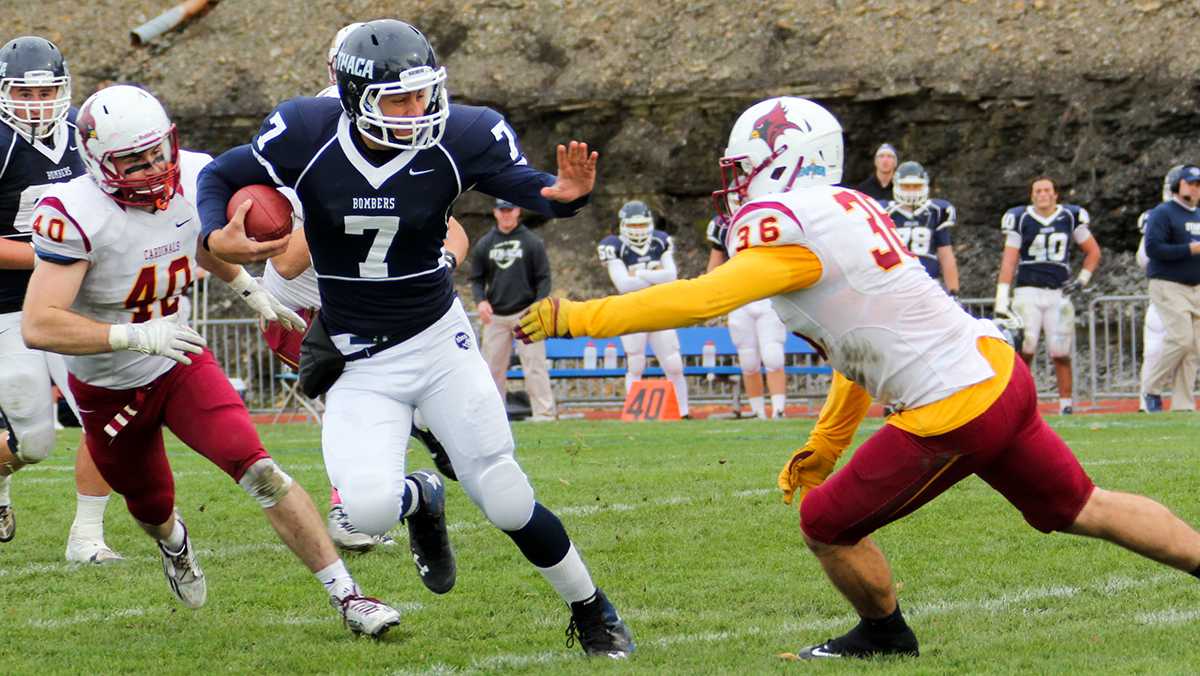 The Ithaca College football team will look to halt its three-game skid when it travels to SUNY Buffalo State at noon Nov. 7 at Coyer Field.

Quarterback Situation in a Tizzy

Out of all of the questions head coach Mike Welch has been asked in regard to the football team’s first shut-out loss in 13 seasons, the one that has remained a staple has been who will be lining up under center for the offense moving forward.

Neither quarterback has superseded the other. Junior quarterback Wolfgang Shafer’s inconsistencies have been well-documented over the course of his first season under the helm. Likewise, senior quarterback John D’Onofrio has completed just 48.3 percent of his passing attempts for two touchdowns and two interceptions.

However, Welch said barring Shafer’s injury from last weekend’s loss to St. John Fisher College, Shafer will start for the Bombers. If he is unable to go against the Bengals Oct. 7, Welch said D’Onofrio will get the nod. If so, it would be the senior’s first start of his career.

Whether it is Shafer or D’Onofrio, the Bombers’ quarterback will have his hands full this weekend. Buffalo State’s pass defense is second only behind the Bombers in the Empire 8 conference in terms of completion percentage and quarterback efficiency. Opposing quarterbacks only complete 51.8 percent of their passes and have a 119.5 efficiency rating when going against the Bengals’ secondary.

Bring Back the Three-Headed Monster

During the Bombers’ three-game losing streak, sophomore running back Tristan Brown has been the featured back in the offense, and rightly so after his breakout performance against Alfred University back in Week Three. Since then, however, Brown has only averaged 55.2 rushing yards per game.

If the Bombers want to revitalize their rushing attack, the team could consider revisiting its game plan for running the ball at the beginning of the season when it used a three-back set with Brown and sophomores Evan Skea and Dan Porter. Skea and Porter are more ground-and-pound backs that can wear down a defensive front by charging up the gut. Once the defense is softened, Brown’s elusive ability as a runner would be no match for tired defense units.

Put It on the Tab

The football team has unfortunately been plagued by injuries throughout the season thus far. Aside from the injury to Shafer, the latest, and probably most devastating, injury to the squad was senior specialist Josh Oliver’s season-ending injury last weekend. It will be virtually impossible for the Bombers to replace Oliver on the offensive side of the ball as well as on special teams.

The loss of Oliver was the third season-ending injury to a top receiver of the Bombers’ offense. Junior wide receiver Brian Balsamo and senior tight end Kyle Hastings were also lost earlier in the season for the remainder of the year.

Prior to Oliver’s injury, the Bombers did not have a well-established No. 2 or 3 receiver that either Shafer or D’Onofrio could consistently rely on. Now that three of the top threats will be out for the rest of the season, the offense needs some of the reserves to step up.

Junior wideout Andrew Tabbert could fill the void as top receiver for the Bombers’ offense. Tabbert was the offense’s leading receiver last week, catching seven passes for 70 yards. Tabbert saw success last season in a 38–27 loss to Buffalo State, when he hauled in five catches for 100 receiving yards.

However, it may be more difficult for Tabbert to eclipse those numbers this year against an improved secondary of the Bengals. Buffalo State ranked eighth in the conference in terms of average passing yards allowed per game last season, allowing an average of 257.5 per game. This season, they are allowing an average of 222.5 passing yards per game, which ranks fourth in the conference.

No Three-peat for the Bombers

The college was officially eliminated from Empire 8 Championship contention with their loss against St. John Fisher last week. The team’s only chance to earn a spot in the NCAA tournament now is to win out in convincing fashion to earn an at-large bid.

The good news for the Bombers is that there has been at least one four-loss team in the playoff bracket in the past three years. The bad news, however, is that the current Division III Top 25 consists mainly of one-loss or undefeated teams. If the Top 25 remains this stacked, it will be very tough for the college to find its way into the dance.

University of Wisconsin-Platteville, Texas Lutheran University and University of Dubuque are the only two-loss football teams ranked in Top 25. North Central College is the three-loss squad, ranking No. 16 in the country.