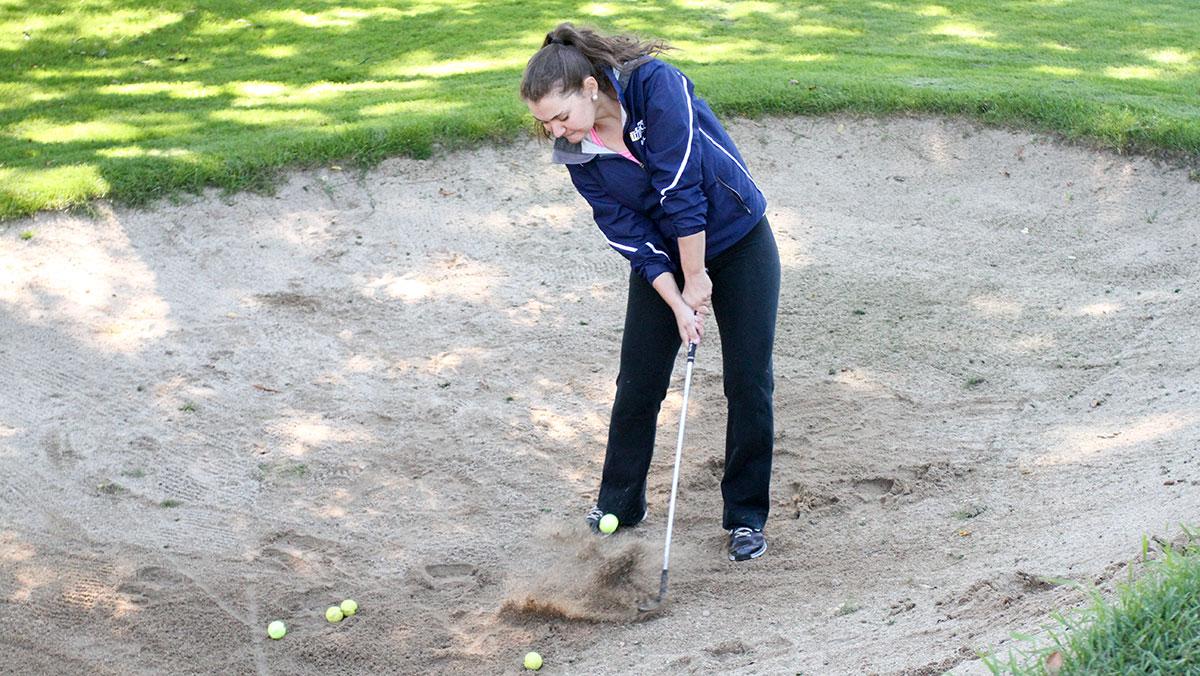 Jillian Flint/The Ithacan
Freshman Kyra Denish hits a shot out of one of the sand bunkers during the golf team’s practice on Sept. 19 at the Country Club of Ithaca.
By Jake Siegel — Staff Writer
Published: September 23, 2014

The golf team is fresh off its fifth-straight Empire 8 Championship, and while the victories have continued to pile up for the Bombers, their play has never been taken for granted. However, winning the Empire 8 is becoming more of an expectation than an accomplishment. The main goal for the South Hill squad is to place higher in the Division III Women’s Golf Championships after tying for fifth place last season.

To try to turn that goal into a reality, one new member joining the team this season is freshman Kyra Denish. Since beginning to play golf at age 12, Denish’s journey has been different than most. Though Denish’s high school, Cherry Hill High School West in Cherry Hill, New Jersey, didn’t have a female team, she said she wanted to learn to play to spend more quality time with her father.

“He pushed me to get better and play competitively, which is the main reason why I went to play in high school,” she said.

Denish and her sister had attended a tryout session for the boy’s team, and both were accepted, becoming the first two females to ever join an all-male team in the history of Cherry Hill West.

Denish played a vital role on the team, helping her school win the South Jersey Girls Invitational as a team in 2013 and recording a third-place finish at the Camden County Amateur Golf Tournament.

Denish will look to carry over the success she displayed in high school to the collegiate level, now that she has cracked the starting lineup for the Bombers this season. This means, in most tournaments, Denish’s score will be tallied onto the overall team score, as the Bombers must designate five players to start in match play but are only required to count four total scores. Denish said she has never been one to shy away from a challenge and is ready to embrace her new role.

“I was really excited when I found out the news that I made the starting lineup,” Denish said. “I always wanted to make this team, and to just know that I got the spot made me so happy.”

While the Blue and Gold’s veteran presence is evident, with seniors Sharon Li and Kelsey Baker along with junior Taylor Reeves, Denish is looking to make an immediate impact.

Li, who won her third consecutive individual title in the Empire 8 Championship Sept. 13–14, said she is excited about Denish’s presence on the team.

“Having Kyra play in the top five and compete with us will be a good experience for her,” Li said. “She has a really good swing and has all the basic foundational skills one needs to play golf. We just hope that she can learn as much as she can, especially from the upperclassmen.”

Moreover, sophomore Kimberley Wong, who was in the same position as Denish last year when she was a freshman on the squad, said based on what she has seen so far, the Blue and Gold are very impressed with one of their newest additions.

“Kyra has tremendous potential, and she still has time to work and improve on her game,” Wong said. “Overall, I have faith in her, and I hope she plays steady this year.”

If the E8 Championship is any indication, Denish is well on her way. Just as Wong had done in her freshman year, Denish was named the Empire 8 Rookie of the Year after shooting 178 for the tournament.

Head coach Dan Wood said Denish hopes to bring her scores down, which will come with added experience.

“If she finds a little confidence and gets a little experiences, I think you’ll see her scores to come down,” Wood said.

Aside from the team goal of winning it all, Denish said she has set a personal goal to cut down on some poorly hit shots that are easily correctable.

“I need to practice more properly,” she said. “It is about taking less silly shots because those shots make big numbers, which I can’t afford.”

As for how she views her score out on the course, Denish said she feels poised to make adjustments to get her to place higher in the team standings.

“I definitely want to shave at least five strokes off my game by the end of the season,” Denish said. “I’m just looking to do whatever I can to get better.”