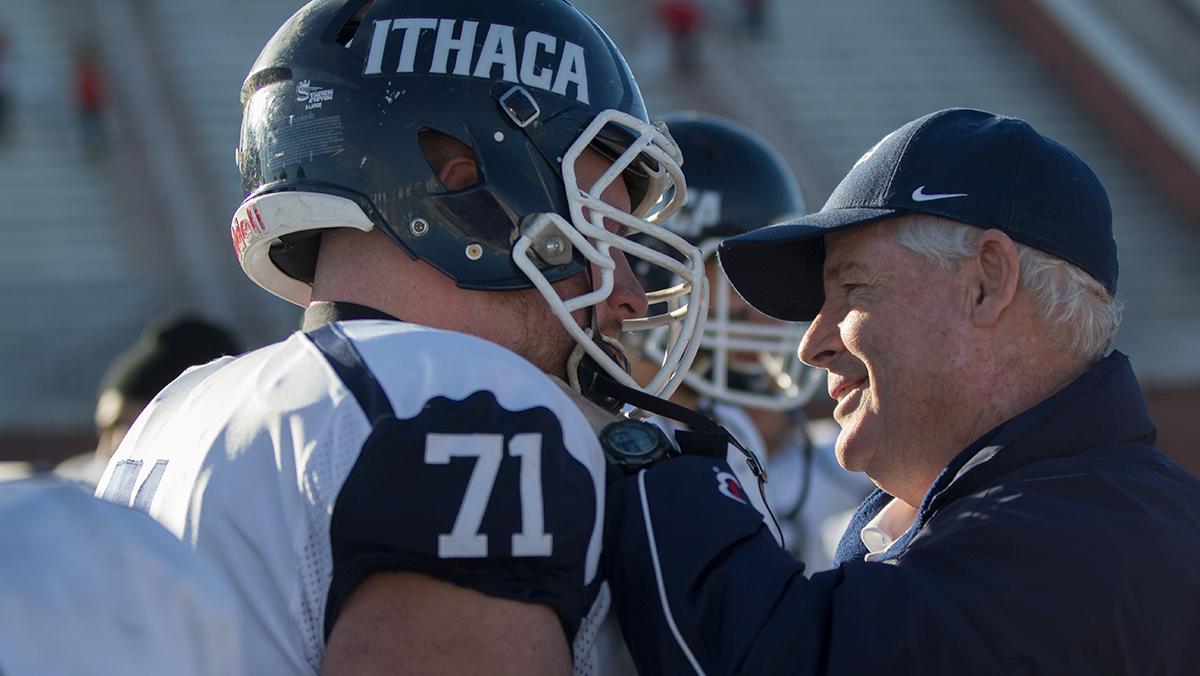 The Ithaca College football team lost the 58th annual Cortaca Jug game 28–16 in Cortland in head coach Mike Welch’s final game of his career. This marks the end of his coaching career, with seven consecutive Cortaca losses and the Bombers’ season with 5–5 overall and 0–5 on the road.

After three punts to start off the game, Cortland found the end zone first when sophomore quarterback Brett Segala connected with senior wide receiver Jon Mannix for a 25-yard touchdown to take a 7–0 lead.

The Red Dragons put seven more points on the board in the second quarter when Segala hit senior wide receiver Anthony Pintabona with a 3-yard pass in the end zone for a touchdown. The Bombers responded with under two minutes to play in the quarter when senior quarterback Wolfgang Shafer found freshman wide receiver Will Gladney on a 14-yard fade for a touchdown. Freshman kicker DJ Ellis’ extra point attempt was blocked, making the score 14–6.

The Red Dragons drove up the field in 53 seconds and scored a touchdown on a 17-yard pass from Segala to senior tight end Josh Riley to end the half.

After forcing a three-and-out to start the third quarter, the South Hill squad began the second half, scoring 10 consecutive points. Gladney found the end zone on another fade pass from Shafer, and Ellis drilled a 25-yard field goal on the next drive to leave the score at 21–16 at the third quarter.

No points were scored for over 15 minutes until, with under five minutes to play, Segala hit senior wide receiver Chris Osterman for a 4-yard touchdown to seal the game.

Cortland head coach Dan MacNeill said he was pleased with how his team persevered through this game and the season.

“When you’re on to your fifth quarterback of the season and he turns the ball over as much as he did, it starts to wear on you,” MacNeill said. “But for our boys to come out and play the way they did and keep their heads in it the whole time was really great to see.”

With his career over, Welch said he was impressed with how his team played all season, despite finishing the season 5–5.

“They battled in all our games, so it was never a matter of effort,” Welch said. “We did a lot of good things this season. We just didn’t do enough together.”

Shafer, who was also playing in the final game of his career, said his teammates made his experience in the game memorable.

“I am so proud of the fight and the resilience we showed today,” Shafer said. “It hurts, but it was so much fun, and I can’t thank these guys enough for making my time at Ithaca College so special.”

In 2017, the Bombers will inaugurate a new coach as the team starts its first season as a member of the Liberty League.