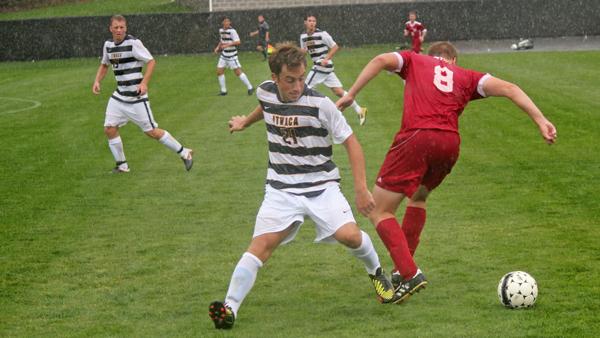 Twenty minutes into a soccer match, a coach sees his squad struggling to cover the width of the field. No matter how badly he wants to regroup his team and address the issue, he can only rely on players within hearing distance to make adjustments. With sports like football and basketball, coaches have the option to call timeouts and converse with the players to fix mistakes. With soccer, the only opportunity the coach has to talk with the whole team is at halftime.

This rule restriction makes preparation vital for soccer. With practice being the biggest key to success, the captains of the men’s soccer squad are taking the lead and instilling hard work through encouragement this season.

Seniors Ryan Norland and brothers Dan and Jack Shirley have taken it upon themselves this fall to focus on how the team is preparing for its competitive schedule. The captains have noticed that there has been a lack of leadership during their last three seasons on the team, but this year they are paving the way for change.

“Throughout the years we’ve learned a lot from our leaders’ mistakes,” Jack said. “We’ve learned how to be better leaders that way. We want to win so bad we’re willing to do whatever we can as leaders to win, so if that means getting the team more cohesive or putting in more hours to work on being a better example, we’ve been able to be successful in that way as leaders.”

Dan said the seniors have been looking at practice rather than games as a tool to get better. To ensure the team will get the most out of practice, the captains have been stressing to the rest of the team to “buy into the system” this season.

Jack said the most important aspect of the Bombers’ new approach is making sure to put as much effort and hard work into practice as possible. Norland added that another component is encouragement and support.

“As far as buying into the system, it’s positivity and everyone believing in each other and working hard for each other,” Norland said. “If you can focus on your main goal as a team and focus on pushing each other, that’s what the buying in is. We’re striving for the same goal.”

Dan said listening to the coaching staff and not taking criticism personally is also important.

“A big part of buying into the system is getting out of your comfort zone and doing exactly what coach is telling you to do,” Dan said. “If we can all just listen to what he’s saying we’re going to fall into that system that he wants — and we all trust him — and he’s going to lead us to where we want to be because he has that all mapped out for us.”

Norland said the seniors are initiating standards this season by treating every member of the team, regardless of age, exactly the same.

“If someone is late, they have to be accountable, but if we’re late we need to be just as accountable as someone else,” Norland said. “There’s certain things that we’ve tried to put into place this year. We’re trying to set the standard. Last year there weren’t as many.”

Freshman defensive back Jordan Filipowich said the seniors have been great leaders by being encouraging and helping the freshmen adjust to soccer at the collegiate level.

“They all have really positive things to say; they’re very helpful and encouraging even off the field,” Filipowich said. “College compared to high school is a lot quicker, so the seniors definitely have your back with a lot of things, a lot of communication on the field. They’re also very encouraging on the field, which makes it a lot easier. It makes me feel a lot more comfortable.”

The Bombers have shown improvements this season after starting with a 2–1–1 overall record. Head Coach Andy Byrne said the captains have been living up to expectations and leading the team by example.

“They know how they want things done, and rather than asking the other kids to do things, they’re getting things done themselves,” Byrne said.