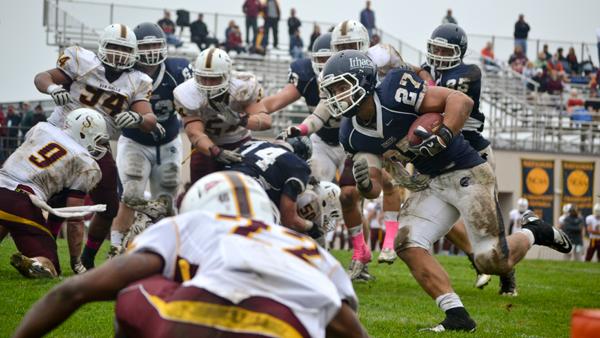 With the football team out of contention for the Empire 8 Conference title, the Bombers are beginning to shift their goals for the final two games of the season. The offensive line, in particular, is using these last contests as an opportunity to build for next year.

The members of the offensive line are using the remainder of the 2012 season to prepare for a major transition in the trenches next year. Three seniors have three games left in their collegiate career, but for sophomores Bobby Garone and Andrew Benvenuto, the end of the season only serves as the halfway point.

Garone has earned more time at center, platooning with senior center Nathaniel Hemingway. The two have alternated series on offense, as Garone is poised to become the full-time starter when Hemingway graduates. Hemingway said the line’s solid chemistry makes him confident in the younger players replacing him next season.

“It’s a good thing,” Hemingway said. “We have some older guys and younger guys, so when the older guys leave, we know that the program is going to be in good hands and they’re going to do damage next year.”

Hemingway, left guard Matt Hartz and right tackle Pat Joyce will be graduating at the end of the year, but all three of their potential replacements have experience on the offensive line at the varsity level. However, only Garone has started in a varsity game. Garone said he is still trying to adapt to the collegiate game after breaking into the offensive rotation this fall.

“Last year I only played special teams, and this year I’m getting on the field,” Garone said. “The last time I was playing offensive line was in high school, so the speed of the game is a lot different. But I think I’m really getting the scheme and what we’re trying to do down.”

Benvenuto said he sees the game against Alfred as a speed bump in what has been a positive year for the line. He also said he has gotten more confident in his abilities in his second season starting as right guard.

“As a freshman last year, I didn’t feel lost playing, but it was just tougher,” Benvenuto said. “This year I’m starting to get my feet wet and really starting to play and get confident. I feel more in control of the offense and hopefully next year it’ll build after that.”

With only a few weeks left in his career, Hemingway is using the time to pass knowledge onto the younger players while trying to enjoy every moment of it. He said he sees great potential in the line.