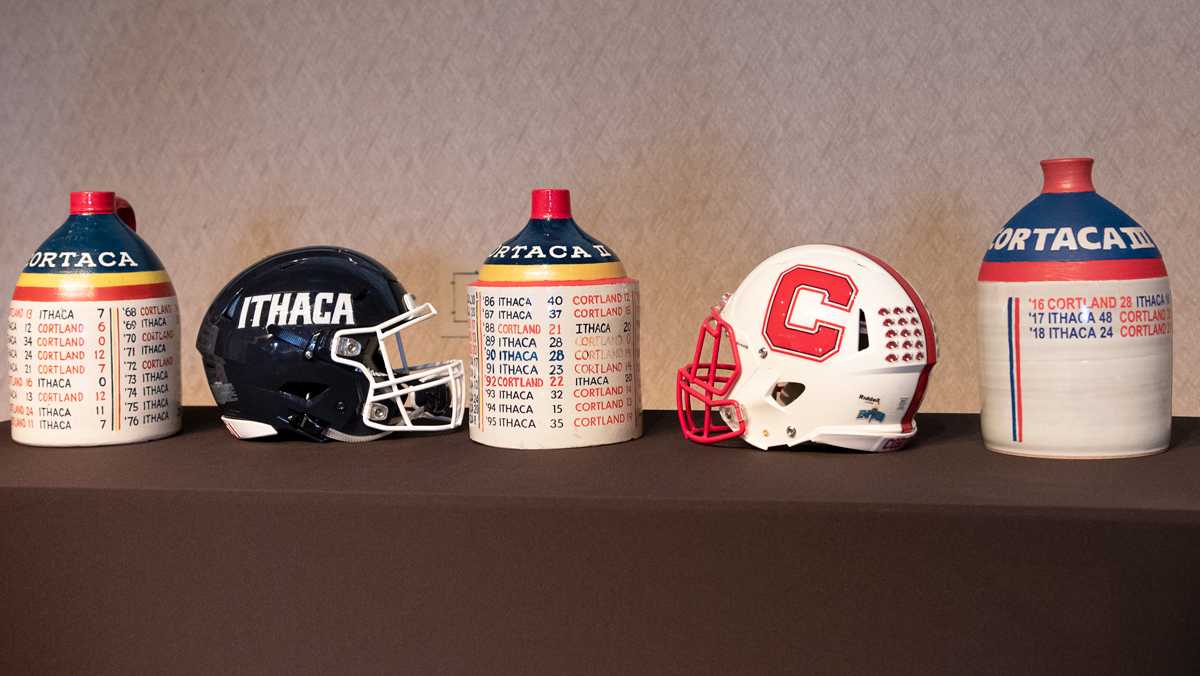 Abbey London/THE ITHACAN
The Cortaca Jug game has been played between Ithaca College and SUNY Cortland for over 60 years. After each annual competition, the jug is awarded to the winning team. In 2018, the Bombers defeated the Red Dragons 24-21.
By Jack Murray — Staff Writer
Published: November 14, 2019

Bassett said that the game’s ticket sales are the highest of all time for a Division III football game at approximately 45,000 and counting.

The press conference was held in preparation for the 61st rendition of the rivalry game being played at MetLife Stadium in East Rutherford, New Jersey — the home of the NFL’s New York Giants and New York Jets.

“This will be and is a once-in-a-lifetime opportunity for both campuses,” Bassett said. “It has been an incredible collaborative experience and integrative learning experience for our students across our campus.”

The game was moved to celebrate the 150th year of collegiate football and with the goal of breaking the attendance record for a Division III football game. The current record was set Sept. 23, 2017, by the University of St. Thomas in Minneapolis and St. Paul, Minnesota, and St. John’s University in Collegeville, Minnesota. The attendance of that game was 37,355, and it was held at Target Field in Minneapolis.

Dan MacNeill, SUNY Cortland head coach, said many people, including Doug Marrone, current Jacksonville Jaguars head coach, see the game as one of the biggest in the country.

The Bombers and Cortland have had strong seasons so far, and the game has postseason implications for both squads. Head coach Dan Swanstrom said the Bombers will focus on managing the Red Dragons’ strong offensive options.

“When you focus on stopping the run, they have a fantastic receiving core and a good quarterback who gets the ball out,” Swanstrom said. “There’s odd numbers in football, and if you put the focus on one, they will hurt you in the other.”

MacNeill said the Red Dragons are also focusing on stopping the Bombers’ powerful offense in their preparation for the matchup.

“I haven’t had success against either [senior quarterback Joe Germinerio or junior quarterback Wahid Nabi],” MacNeill said. “Both are a part of a good system, and that is what we need to stop. The tools they have are also necessary to stop. Gladney is a pretty good football player and a really good weapon. We need to make sure that the quarterback and the receivers and the running backs and the offensive line are all in check. We need to mitigate the risk as best we can.”

The South Hill squad came out red-hot at the beginning of the season, cruising to a 7–0 record and rising to No. 8 in the country. However, the Bombers faced then-No.24 Union College on Nov. 2 for the Liberty League championship and lost 31–21. A win would have secured an automatic bid to the NCAA tournament and given the squad its first league championship since switching over from the Empire 8 conference in 2017. The Bombers were unable to rebound in their next contest when they lost 38–12 to Rensselaer Polytechnic Institute on Nov. 9.

With one game remaining in the season, the South Hill squad finds itself unranked and unlikely to secure a spot in the NCAA tournament. The team is hoping to at least clinch a berth in an Eastern College Athletic Conference bowl game.

Both Swanstrom and the Bombers’ captains declined to comment on the losses and said they were solely focusing on the game ahead of them.

Cortland also cruised to a 7–0 start to the season and climbed as high as No. 18 in the national rankings before falling to The College at Brockport 32–26 in overtime Nov. 2. The Red Dragons initially took a 23–0 lead over the Golden Eagles and led 23–7 at halftime, but collapsed in the second half en route to the loss. The Red Dragons managed to defeat Hartwick College 32–21 in their next game, though they struggled to pull away from the 1–8 Hawks until the fourth quarter. The 8–1 Red Dragons are also unranked going into the Cortaca matchup, but a win would help their case for an at-large bid to the NCAA tournament. If they do not earn a bid, they have already clinched the Empire 8’s berth in the New York State Bowl, which would also feature a representative from the Liberty League.

Cortland senior linebacker Gregory Alfieri, a team captain, said that while the stadium setting is a unique opportunity, he is focused on the game and his teammates.

“I’m blessed to be a part of this rivalry,” Alferi said. “It’s a great stage, and we are grateful for it, but at the end of the day, we are just here to play football and do what we do. We want to play our best game and enjoy it.”

The Bombers have been led by a dynamic offense, highlighted by Germinerio, who has thrown for 2,877 yards and 30 touchdowns, compiling a quarterback rating of 163.75. Senior wide receiver Will Gladney and junior wide receiver Andrew Vito have carried the receiving load with 932 and 874 yards respectively, as well as 14 and eight touchdowns respectively. Senior running backs Kendall Anderson and Isaiah D’Haiti lead the rushing with 271 and 253 yards respectively.

Senior linebacker Nick Garone has dominated for the squad’s defense. He has 86 total tackles and four interceptions. Sophomore linebacker Miles Haynes has contributed 60 total tackles, and junior defensive back David Nieto has added three interceptions. On special teams, freshman kicker Nicholas Bahamonde has not missed a field goal this season.

Senior quarterback Brett Segala leads the Red Dragons’ offense. He has thrown for 2,362 yards with 21 touchdowns. Sophomore wide receiver Cole Burgess has been a key target with 848 yards and eight receiving touchdowns, while senior running back and captain Zach Tripodi leads rushers with 1,098 yards and eight rushing touchdowns. On defense, Alfieri and junior linebacker Dylan Dubuque have tallied 77 and 68 total tackles respectively.

Garone said this game is meaningful not only for the current team but the alumni. His father, uncle, older brother and older sister all graduated from the college.

“I’ve been coming to these games since 2011,” Garone said. “I grew up knowing I was going to Ithaca College. My brother would take me around when I was in middle school and let me go hang with the guys, and I always felt at home here.”

Swanstrom said he is proud of the collaborative effort that has made the game a reality.

“There are so many people from so many different layers that made this happen,” Swanstrom said. “Somebody could have said no. If one person said no, the idea, the dream and the stage would be gone. It takes a ton of people with a great vision and a great idea to continually work to pull it off.”

Kickoff is scheduled for 1 p.m. Nov. 16. The Bombers are looking to secure their third consecutive Cortaca Jug, while the Red Dragons are hoping to win their eighth victory in the past 10 years.