Bombers ready to take back the Jug in 57th annual Cortaca 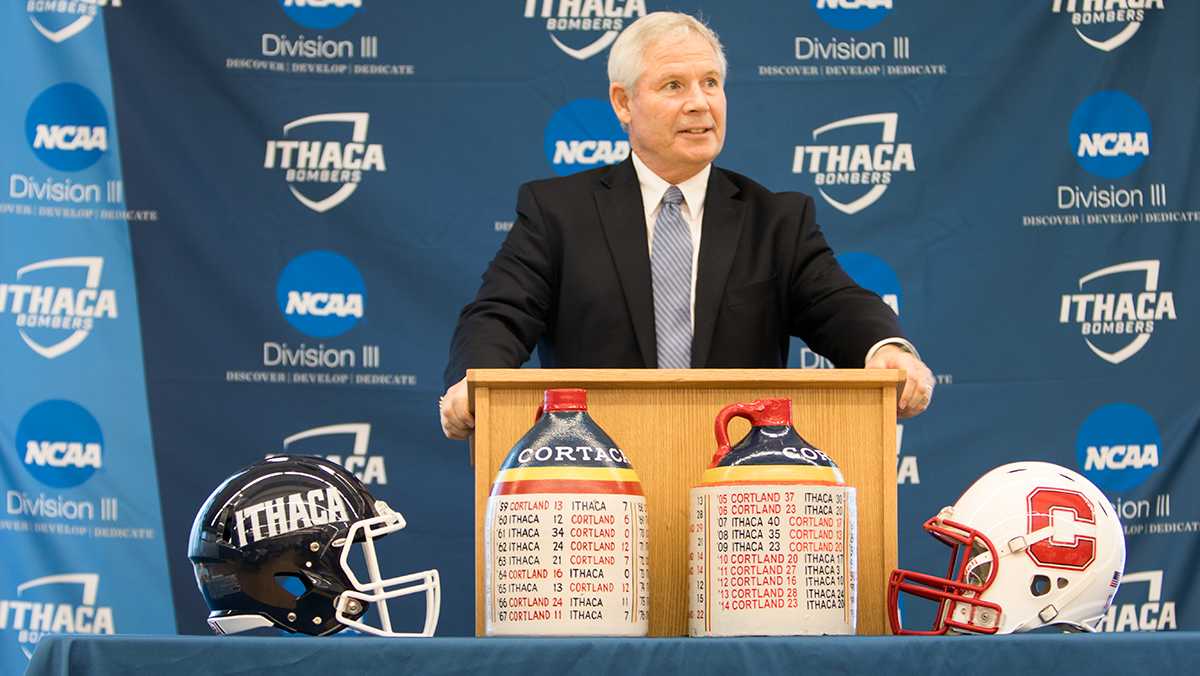 In 2014, the Ithaca College football team walked somberly off the grounds of the SUNY Cortland Stadium Complex jugless after being upset by a Red Dragon football team with a sub .500 record. However, the tides have turned this year as the Bombers will bear the role of underdog leading up to the 57th annual Cortaca Jug game.

Last season, the college entered the showdown with an overall record of 7–2, while Cortland hobbled in with a 4–5 record. However, this season they have swapped records.

The 2015 Cortaca Press Conference, held Nov. 11 in the Hill Center, featured many spokespersons, including Susan Bassett, director of intercollegiate athletics. Bassett said she hopes everyone who attends the game will treat others with respect.

“Regarding the recent and very important discussions happening on the Ithaca College campus regarding racial and cultural bias, we would like to share the message that every extent of this day, whether they are Ithaca or Cortland alumni or visitors, everyone is expected to treat one another, the staff and teams with respect,” Bassett said. 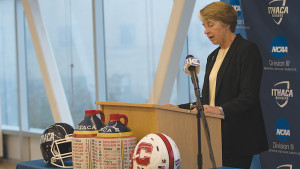 Terri Stewart, director of the Office of Public Safety and Emergency Management, also addressed the group, stating Public Safety, in accordance with other law enforcement, is constantly improving upon past events. Stewart was referring to the riots in Cortland on Nov. 16, 2013, following the Cortaca Jug match, which resulted in 80 arrests.

For the first time in the history of the Cortaca rivalry, the outcome will be held as a deciding factor of the Empire 8 Conference. Since 2000, the Red Dragons have been a part of the New Jersey Athletic Conference. 2015 marks the first annual Cortaca game that is truly meaningful to the league standings, making it that much more prestigious to win the game, head coach Mike Welch said.

The college will take the field this weekend in eighth place in the conference with a 2–5 record in league play. After getting off to a promising 4–1 start, the Bombers have dropped four straight contests for the first time since 1957, thanks in part to a rash of injuries on the offensive side of the football and a depleted defensive unit.

Welch said when it comes down to it, the squad did not meet its high expectations coming into this season.

“We have a lot of expectations here at Ithaca,” Welch said. “Win every game, win our conference and the NCAA playoffs … This team has never quit, has never felt sorry for themselves. And this is new terrain for us. Generally we’re on top. We’re running the table. We’re putting ourselves in position to win our conference. That’s not the case this year.”

The Red Dragons come into the highly anticipated game with a 5–2 record in conference play.

Cortland head coach Dan MacNeill said he believes opponents are out to prove a point against them.

“Everyone plays their best football against Cortland,” MacNeill said. “I like this team, and I am really excited about bringing them over to South Hill. We know that we’ve got a test, and nobody is giving anything away.”

Cortland comes into play in a three-way tie for first place in the last weekend of the regular season with Alfred University and St. John Fisher College. The ironic part to all of that is Cortland holds the tiebreaker on both Alfred and St. John Fisher. If Cortland wins, it earns the automatic bid to the NCAA Division III Tournament.

The Red Dragons have won five straight Cortaca Jug games, including last year’s barnburner when the Red Dragons scored a touchdown on a botched a field goal attempt, which would have tied the game, as time expired. Two years ago, Cortland threw a 41-yard touchdown pass to take the lead 28–24 with 1:20 remaining in regulation en route to the team’s victory. 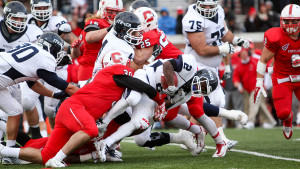 Recently, Cortland’s offense has been hitting on all eight cylinders. Through the first nine games, Cortland has been averaging over 431 total yards per game. For Cortland to come to South Hill and beat the Bombers, it will need to shift into high gear as it prepares for the playoffs.

The Bombers have suffered from key injuries in their receiving corps throughout the season, as the team has lost three of its top threats in junior wide receiver Brian Balsamo, senior tight end Kyle Hastings and senior wide receiver Josh Oliver.

With the loss of these three players, the college will bring an inexperienced receiving corps into the game. Junior wide receiver Andrew Tabbert is one of the only receivers on the roster who has any sort of experience playing in the Cortaca Jug game. Tabbert participated in last year’s contest and recorded zero catches for zero yards.

On the other hand, senior defensive lineman Logan Murphy, who leads the Bombers with seven sacks on the season, was unable to play in last year’s Cortaca Jug due to injury. Murphy said his absence last year fueled his drive to get back onto the football field and win the Cortaca Jug for the first time in his college career.

“I would say that last year not being able to participate with everyone else, as much in the fashion that we lost … That definitely drove me through the offseason and to the preseason to just get my body in the best shape I could possibly be for the last go-around,” Murphy said.

Senior tight end Mike Lopez, who has stepped in as the offense’s top tight end when Hastings went down, has experience playing in the Cortaca Jug game, but not as a receiver. During past years, Lopez served as the team’s punter against Cortland. Lopez has played in three games this season, racking up just nine catches for 45 receiving yards.

Welch said the offense needs to take advantage of scoring opportunities in order to keep up with a Cortland offense that averaged 35.6 points per game.

Meanwhile, seven out of the probable 11 starters on the Red Dragons’ defense have significant experience playing in the Cortaca Jug. Senior linebacker Matt Ambrose has recorded 26 total tackles over the past two Cortaca Jug games and has compiled the 13th-most total tackles in the conference this season with 68 tackles.

Welch said it can be challenging to keep those players who have no experience playing in the Cortaca Jug game mentally focused throughout all four quarters. As running back and fullback for the college from 1969 to 1973, Welch played in multiple Cortaca Jug games and has been a part of 36 total games against Cortland. Welch said he has shared his experiences as a player playing in the game in order to prepare his team for the game this weekend.

“You just have to keep focused on the performance and not so much wanting to play to compete,” he said. “Because you want to win this thing so bad … As a player, you have to compose yourself.”