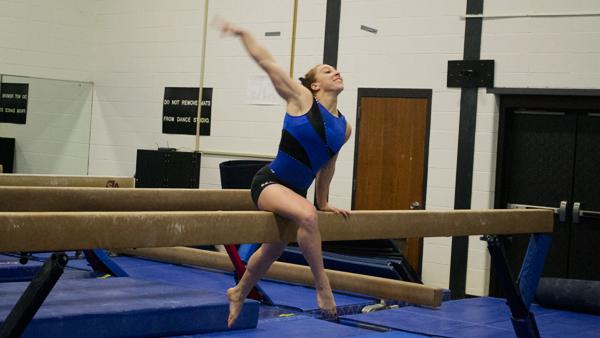 With the season fast approaching and a lineup thinned by last year’s losses, Ithaca College gymnastics will depend on the leadership of the seniors and graduate students to guide them to success.

Last season, the team lost six seniors and one graduate student, including the college’s most decorated gymnast, Jessica Bolduc ’11. Because of these departures, returning graduate students Tiffany Grube and Christine Niles, and this year’s three seniors, are prepared to take over, not only as gymnasts but also as leaders.

Grube said this season is drastically different from last because of the large number of underclassmen in the lineup. While pressure is high for the young gymnasts, Grube said that the confidence level in them is as well.

“Our upperclassmen in the past have been in the lineup so much, so as a whole, the leadership is the same between upperclassmen and freshmen,” Grube said. “It’s important to let them know that they have really big shoes to fill, but they have the capability of doing it.”

“One of the most important things I have learned from them about being a leader is that they lead by example and work hard every day as a gymnast and a person,” Cohen said. “We could not ask for anything more out of them, because they basically are our big sisters.”

Grube said the psychological training is being stressed equally to the team so they learn how to overcome fear and perform at the highest level.

“I have not been really fearful in my time throughout the sport, but something that is important to teach the underclassmen is they have to practice how they want to compete,” Grube said. “If you practice fearful and hold back, then that’s how your competition is going to look.”

Klusky said being a freshman adjusting to the differences between high school and college as a student and as a gymnast is difficult, but the seniors and graduate students provide guidance on how to make a smooth transition on top of their regular team duties of planning winter break events and picking out team apparel.

“They don’t intimidate us, because even when you accomplish something small, they still congratulate you,” Klusky said. “They set an example of how to work through difficulties with gymnastics and school, so they lead by example both inside or outside the gym.”

The upperclassmen have taken to becoming leaders and helping acclimate the younger students to college both on and off the matt. Klusky said whether it’s tutoring, rides off campus or any other request that one of the underclassmen have, the upper-class athletes have been willing to step in and lend their resources and knowledge to helping.

The Bombers are looking ahead to their first meet Jan. 12, where they will face-off against Brockport. Until then, Grube said, everyone can look at them as the underdog, but they know the team will be ready to compete at last season’s level against every team on the schedule.

“This season, we might be stuck in the fact that everyone recognizes we are a very young team, which may make us a little bit like the underdog,” Grube said. “I want [the girls] to know that they are a talented team, and we are prepared to be as competitive as we have in the past.”