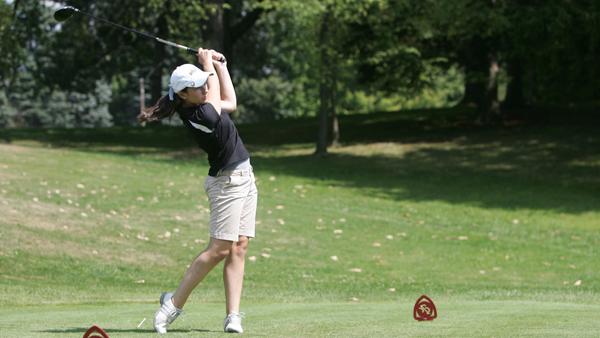 For a varsity program that’s only three years old, the women’s golf team has already established a tradition of developing freshmen into talented players quickly. Last year alone the Bombers had five different freshmen on their roster, but the team was still able to capture both the Empire 8 and Eastern Collegiate Athletic Conference Championships.

After a 2011-2012 season in which more than half of the roster was made up of freshmen, the Blue and Gold only have one new freshman this year, Taylor Reeves. In her first two tournaments with the Bombers, Reeves shot a 94 at the St. Lawrence Invitational and a 100 at the Empire 8 Championships, scores that exceeded the first-day cut limit.

Senior Samantha Liberty attributed Reeves’ struggles to nerves and said Reeves has the potential to make a lot of improvements in a fairly short amount of time.

“Those were her first two tournaments, so I think she had a little nerves in her, and she didn’t really know what it was like to compete in college,” Liberty said. “But I think she knows what to expect now from it, and I expect great things from her later in the season.”

Bombers Head Coach Dan Wood attributed Reeves’ opening scores partly to her lack of familiarity with the courses. He also said while Reeves needs to improve her game in several areas, she does have a lot of ability.

“She does have power, she hits the ball a long way and she does have the ability to hit some very crisp iron shots,” Wood said. “What she needs most of her work on right now is just a little better tempo and timing in her full swing and a lot of work on her short game.”

Wood compared Reeves to senior Jackie Young, who also started out averaging scores in the 90s during her freshman season but made enough improvement every year to become a regular in the Bombers’ starting five. Following that path, Wood thinks Reeves can improve by about three shots per year, which would make her easily among the Bombers’ top performers.

Reeves first began playing golf competitively while she was a student at Lakeland High School in Greenfield Township, Pa. Her school didn’t have its own girls’ team, like many of her Bombers teammates, so she played on the co-ed varsity team alongside an otherwise all-male roster that included her brother, Greg.

“It is more practice than I’ve ever had in high school,” Reeves said. “It’s a lot more dedication and I guess that’s been the hardest part.”

While Reeves admitted it is difficult to be the only freshman on the team, she also said one of the things that’s made the transition easier for her has been the enormous amount of support and advice she’s gotten from her older teammates.

“It is kind of difficult because there are no seniors who graduated, and then it’s kind of a plus one,” Reeves said about her role. “But it’s like having nine big sisters on the team.”

Reeves said she’s gotten a lot of advice from her teammates but one of the most helpful tips isn’t even directly about golf at all.

“The biggest thing has been time management,” Reeves said. “Try to get things done early. When you’re at practice, you want to focus on golf and not what project you have due the next day. Their biggest thing is being able to balance being on a team and being a full-time student.”

Liberty, one of two remaining players from the Bombers’ original 2009-2010 team, said one of the best pieces of advice she’s given Reeves is to avoid being fazed or upset by a couple poor shots.

“She knows how to handle her emotions, and she knows that sometimes you don’t have a great shot but it’s how you recover that makes it better and can help your score out,” Liberty said. But she’s a great competitor. She can grind out for those pars that she needs.”

With nine older teammates, Reeves said she knows exactly where to look for guidance.

“No one’s really elitist on the team,” Reeves said. “They’re really willing to help me out and help me improve, and if they’re more experienced, that’s all the better.”