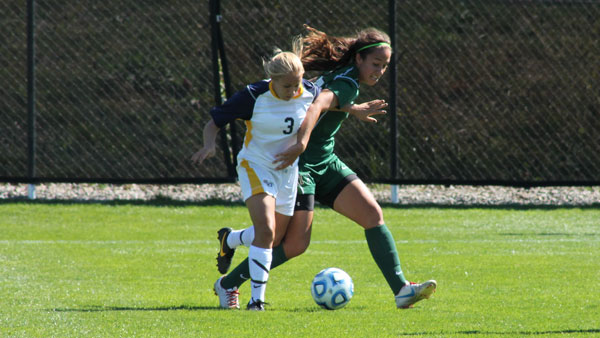 Jillian Flint/The Ithacan
Sophomore Kelsey King dribbles the ball around a Farmingdale State defender in a 2-1 win against the Rams on Sept. 29. King leads the Bombers with seven goals this season.
By The Ithacan — Ithacan Staff
Published: October 2, 2013

The football team defeated SUNY-Buffalo 24–20 on Sept. 28 on the road. Senior quarterback Phil Neumann found Vito Boffoli, junior wide receiver, on a short crossing route. Boffoli broke three tackles and ran into the end zone for the game-winning, 30-yard touchdown with 22 seconds remaining in the game. Boffoli caught three passes for 60 yards on the game-winning drive, and Neumann threw for all 72 yards of the drive, completing four out of five passes.

The Bombers (3–0, 1–0) blew a 10-point lead in the fourth quarter when Bengals (2–2, 0–1) junior running back Rich Pete scored on an 18-yard touchdown run just 43 seconds earlier. The Bengals also scored on their previous possession when senior quarterback Casey Kacz found senior wide receiver Sherman Nelson open on the sideline to cut the Bombers’ lead to 17–14 with 3:30 left in the game.

The Blue and Gold return to action at 2 p.m. Saturday at Hartwick College.

The field hockey team finished the week 0–1 after falling to Stevens Institute of Technology 3–2 on Sept. 28. The Bombers (6–2, 1–1), who trailed 3–1 after 45 minutes, tried to surge back after a goal by junior forward Danielle Coiro cut the lead to one, but they could not connect in the final minutes.

Even with the loss, freshman goalkeeper Katie Lass earned Empire 8 Defensive Player of the Week honors with her career high of 28 saves against the Ducks. This gives the goalkeeper 46 saves in her last two starts for the Blue and Gold. Lass sits in first place among her Empire 8 counterparts with a .866 save percentage.

Even with six wins overall, the Bombers are still in sixth place in the Empire 8 standings. The South Hill squad will travel to two Empire 8 competitors in its next two games. The team will take on the Utica College Pioneers (7–2, 2–0) on Oct. 9 followed by a visit to Nazareth College (3–5, 2–1) on Oct 12.

The women’s soccer team (8–1–0, 2–0–0) collected two wins over the weekend, defeating Alfred University and Farmingdale State College. The team spread the offense around in both games, as four different players scored goals for the South Hill squad.

The Bombers defeated the Saxons 2–0, earning their second conference win of the season. Senior midfielder Amanda Callanan and sophomore forward Kelsey King each scored for the Blue and Gold. The goaltenders, sophomore Beth Coppolecchia and senior Becca Lewis, combined for the shutout in goal.

On Sunday, the Bombers staved off a late rally by the Rams to win 2–1. Senior forward Jackie Rodabaugh scored in the first half, and senior back Anna Gray netted her first goal of the season off a penalty kick in the second half.

The Bombers will get back to Empire 8 competition when they take on the Elmira College Soaring Eagles on Oct. 12 in Elmira, N.Y.

The golf team shot a 315 on Sept. 28 at Elm Tree Golf Course and a 315 on Sept. 29 at Cortland Country Club during a two-day tournament last weekend. The Bombers finished in second place to No. 1–ranked Methodist University. They beat third-place SUNY-Cortland by 47 strokes and were second out of 11 schools. The Bombers now have an individual stroke average just more than 79.

Junior Sharon Li finished third overall in the tournament and totaled 154 on the weekend (76–78). Senior Amanda Failla, who has been key for the Bombers since the Empire 8 Championship victory, shot a 158 on the weekend, beating her best score at Cortland in the past by four strokes. Kimberley Wong shot a 158 as well, followed by freshman Lisa Calcasola with 162 and junior Kelsey Baker with 164. Sophomore Taylor Reeves and junior Taylor MacDonald traveled as individuals, and each finished with their second-best overall career scores, 172 and 180, respectively.

Failla earned Empire 8 Athlete of the Week honors for her performance.

The Bombers will travel to the Taconic Golf Club in Williamstown, Mass., on Saturday where they hope to continue their steady play after receiving a No. 5 NCAA and Golfstat ranking.

Though the women’s cross-country team held out their top runners on Sept. 28, six of the top finishers clocked season-best times, placing 10th out of 18th as a team at Roberts Wesleyan’s Harry F. Anderson Invitational in Rochester, N.Y.

Rounding out the top five, sophomores Emily Krakowski finished in 20:43.20 while Colleen Vaughn finished in 21:07.10.

The team has jumped from the 28th position in the preseason poll to 17th in the cross-country national rankings. In the Atlantic Region rankings, the team climbed to No. 4.

The Bomber’s next race is on Saturday at the Geneseo Invitational.

The women’s tennis team traveled to Geneva, N.Y., this past weekend for the Intercollegiate Tennis Association Northeast Regionals. The last competitor standing for the Bombers was Cristina Nunez, graduate student and captain.

Nunez finished the tournament in second place, the best finish ever at the ITA Regionals for an Ithaca College women’s tennis player. Nunez competed in six matches throughout the tournament, but eventually lost to Brittany LaBruna of William Paterson University in three sets.

The Bombers had two other players advance to the second round, freshman Haley Kusak and junior Allison Vizgaitis. Vizgaitis also paired up with sophomore Marni Blumenthal for doubles competition. The two completed a first round 9–7 victory against host William Smith College’s freshmen Ashley Lyon and Hannah More. However, their run ended shortly after with a score of 8–6 by sophomores Ashley Masanto and Alison Wang of New York University.

The Blue and Gold will get back to Empire 8 competition against St. John Fisher College on Thursday in Rochester, N.Y.

This weekend, the sculling team hosted its first fall regatta in Ithaca College history. The Bombers took on Colgate University, which came with seven boats of various sizes, and William Smith College, which sent two singles.

At this regatta, each boat raced the clock in a standard 2,000-meter headrace. Boats then were paired up based on the results of their 2Ks, racing side by side as if they were participating in a spring regatta for a 1,000-meter rowing event. The times from each race were then combined, and awards were given out to the top finishers in five event categories.

The Bombers finished the event with two medals, a successful beginning to this new regatta. Seniors Stephanie Zang and Anna Schenk finished first in the double event. Their teammates senior Caroline Dykstra and sophomore Sarah Muroski took the top spot in the lightweight double event.

The Bombers will hit the water again on Saturday when they travel to Head of the Genesee in Rochester, N.Y.

The volleyball team began a busy week with a loss to Keuka College on Sept. 25. The Bombers forced the visiting Storm to five sets, but were outlasted 3–2. Junior middle Rylie Bean led Ithaca with 18 kills and 17 digs.

The team was back at it on Sept. 27, traveling to the Lycoming Tip-Off Classic tournament in Williamsport, Penn. The Bombers began the weekend with a pair of losses to St. Mary’s College, 3–1, and Lycoming College, 3–2. The team wrapped up the weekend with two wins on Sept. 28, cruising to a 3–0 victory against the Wildcats of Pennsylvania College of Technology, and outlasting the Misericordia College Cougars, 3–2. In the final match of the weekend, freshman Molly Brown set a season-high of 50 assists.

The Bombers head to Rochester, N.Y. on Saturday for the Nazareth College Tournament.

The men’s soccer team lost 2–1 in its matchup on Sept. 25 against the University of Scranton. Junior forward Casey Williamson scored the lone goal.

On Sept. 28, the Bombers traveled to Houghton College. After one half of play, the score was tied at one. Sean Forward found the back of the net for the South Hill squad, but the Highlanders went on to score three unanswered goals to propel themselves to a 4–1 victory.

The Bombers suffered another loss when the team took on Hobart College on Oct. 1. Hobart defeated the Bombers (1–7) by a score of 1–0.

The Bombers will head to Alfred University on Saturday to face the Saxons.