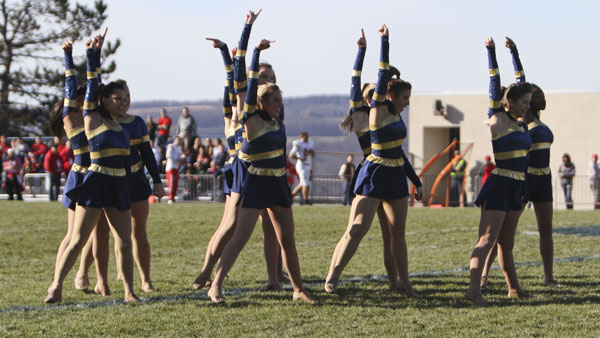 Typically, it’s the job of cheerleaders and dancers to promote spirit and raise the energy of the crowd. Now, as the Ithaca College Dance Team and the Ithaca College Cheerleading Team head to the National Cheerleaders Association and National Dance Alliance Collegiate Cheer & Dance Championships from April 9–13 in Daytona, Fla., the crowd will cheer them on when they take the stage.

Both teams have competed in other, smaller competitions including Reach the Beach Nationals in Ocean City, Md., and the Universal Dance Association College Nationals in Orlando, Fla. But this will be the first time both teams will participate in this particular competition.

Junior Jasmine Spearman, treasurer of IC Cheerleading, said she believes her team is ready for the competition because its skill level is superior in comparison to previous years.

“In previous years, the technique was there, but the advanced stunts and skills we have now as a team have definitely progressed over the years,” Spearman said. “That was our reason why we decided to go to [Nationals], because we have a chance.”

Senior Sarah Hassett, co-captain of the ICDT, said the team has decided to compete because of the progress it has made during the last few years and the abilities of the individual dancers are the best since joining the squad.

“The role of the captains has become more of a team effort versus just the captains being in charge, so the overall dynamic is awesome,” Hassett said. “When I got here freshman year, dance team was nothing special, so [senior Jess Caracciolo] and I made it our goal to have dance team be known on campus, and we’ve gotten a lot more involved over the past four years.”

Unlike many other club sports, these two teams are student-run, so self-motivation is an important factor in their training. Additionally, it is the first season IC Cheerleading has been without coach Dennis Friends, who moved to Albany, N.Y., to be closer to his family.

The ICDT is also predominantly captain-run. Hassett said the team had a choreographer come in for two practices to teach the team members the contemporary jazz dance they will be performing at Nationals.

“The fact that we brought in a choreographer really was awesome because it’s hard for me and Rachel, as captains, to come up with a routine that really suits everyone,” Hassett said. “This one really brings us out of our comfort zone, but it looks good as a cohesive group.”

Hassett said the two days learning the choreography at the beginning of the year were especially tiring and overwhelming because of how fast the team needed to learn the choreography. She also said the first day the choreographer came in to teach the dance, the team had to learn half the routine in less than seven minutes, which was difficult given how technical the dance is.

The routine consists of fast movements and advanced tricks that many of the members have not done before. The dancers must keep up with difficult turns and pirouettes, or else the routine will be out of sync.

This season, junior Rachel Kern, co-captain of the ICDT, has enforced a team rule requiring dancers to go to the gym for one hour, three days a week because of they need to build endurance to perform the dance. The dancers must sign in when they get to the gym, and when they sign out they have to check off that they did cardio, weights and stretching.

“I thought the gym was a good idea to enforce because you need the stamina to do the dance, and we needed extra muscle building for our legs because we had a lot of turning and leaps,” Kern said.

In a typical practice, the ICDT does stretching, strength exercises and works on technical abilities. When football or basketball are in season, the squad also has to work on its halftime routines, which have required additional practices this year in order to get down all its techniques.

IC Cheerleading has been working on its tumbling skills as well as making the entire routine more difficult. Particularly, the pyramids the squad is trying to achieve this year are much more challenging. The team is one of the few in Division III to have two 2–1–1 pyramids in its routine. The difficulty level is showing, as the team has had to deal with numerous injuries this season including five concussions, five rolled ankles and a torn ACL and meniscus.

In addition to perfecting their skills for competition, the teams have also focused heavily on fundraising. It will cost IC Cheerleading around $25,000 and the ICDT about $12,000 to go to nationals. IC Cheerleading has raised money through chocolate sales and restaurant nights at Moe’s Southwest Grill and Firehouse Subs, which donated a portion of proceeds to the teams. Families alone have contributed $10,000 toward IC Cheerleading.

Both teams agree that practicing and fundraising has been well worth the time and energy because Nationals is their biggest competition, and they only have one shot at a title.

Sophomore Brittany Asito, fundraising coordinator of IC Cheerleading, said she wants the college to know what the team is capable of, because she said this opportunity may bring new respect to the program.

“It is all about getting our name out there,” Asito said. “Having our name on the board is huge, so it will hopefully get us a lot of recognition and respect from the school.”

Kern said she is excited for how far the ICDT has come and to see all the team’s effort pay off.

“The journey has been awesome, and I can’t wait for everyone to be confident and perform,” she said. “It’s going to be really great to just see the improvement of the team, and I want everyone on the team to appreciate all the hard work we have done and to have a great time.”