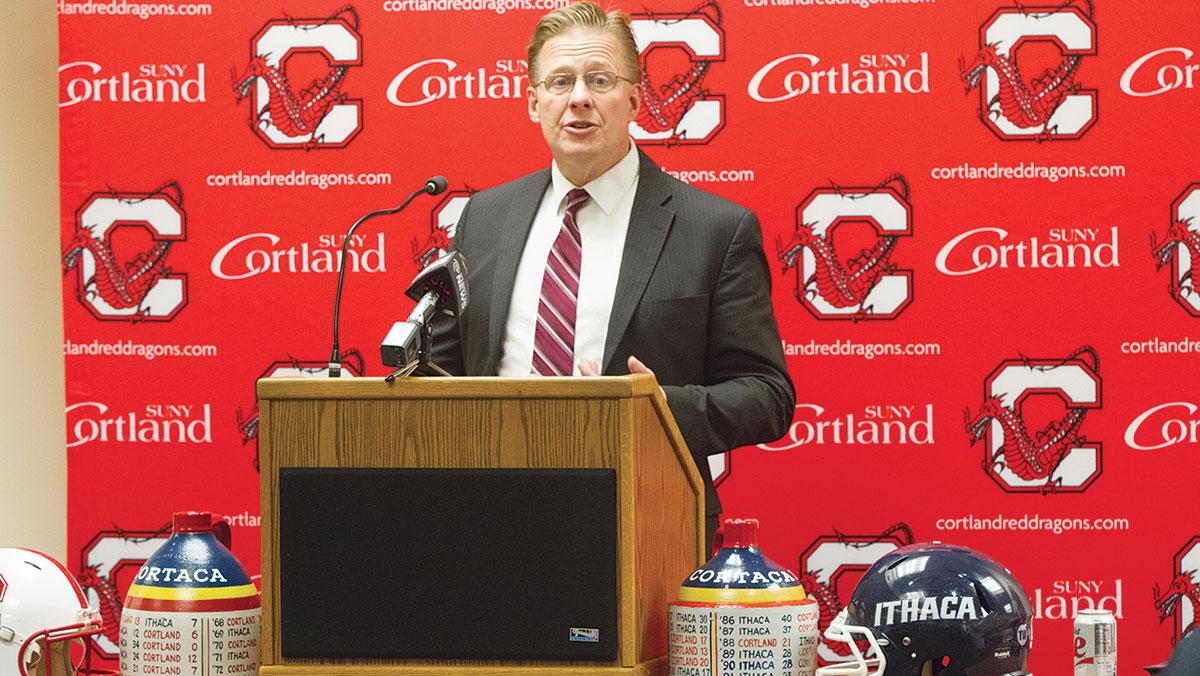 The most intriguing matchup in the 56th Annual Cortaca Jug football game is not between the Ithaca College football team and the SUNY Cortland Red Dragons, but the matchup between Cortaca the game and Cortaca the event.

After celebrations in Cortland, New York, devolved into chaos last year resulting in the arrests of 80 individuals including 19 SUNY Cortland students, officials from the City of Cortland and Cortland State submitted an 82-page report on June 1 on the events that occurred on Nov. 15, 2013. The report included nine recommendations on improving the chaotic environment that emerges from the annual game. None of the recommendations, however, included cancelling or suspending the game, as its long-term continuation was ensured by Cortland’s decision to join the Empire 8 next season.

With Cortaca set to be a conference game, the fixture will have to continue to be played on an annual basis since the conference requires each football member to play all the other members of the conference. Cortland head coach Dan MacNeill said he does not know what would happen if events similar to last year force the schools to reconsider playing the game.

“We can’t choose not to play a conference member,” MacNeill said. “If somebody above with the power said we’re done with this thing, then that would change the context of the conference.”

With last year’s Cortaca better remembered for the photo of an anonymous drunk man jumping off the roof of a house than the photos of then-Red Dragons junior wide receiver John Babin out-jumping the Bomber secondary, the City of Cortland Common Council formed the College and Community Joint Commission to figure out how it could, in its own words, “take back Cortaca.” SUNY Cortland Director of Public Relations Fred Pierce said it is an attempt to steer the narrative of Cortaca away from the reputation of being an event.

“We had people coming in from other college campuses, from high schools to Cortland ’cause they heard this is where the party is,” Pierce said. “What we’re trying to do is take back that word ‘Cortaca’ from being identified with that kind of behavior and putting it back where it belongs, which is this fine football game and this tradition.”

The “Take Back Cortaca” initiative is multi-faceted, and while Pierce said the on-campus security was not a major issue, the commission’s report recommended an increase in on-campus events to serve as a solution to the off-campus security issues. SUNY Cortland and its Student Government Association responded by scheduling a concert led by mashup duo White Panda and a giveaway of $20,000 worth of prizes including GoPro video cameras and both PlayStation 4 and XBox One gaming consoles after that concert, which is scheduled for the evening after the game. The school’s SGA tapped into its reserve funds for this expenditure by designating it as an emergency.

Of the nine recommendations provided by the commission’s report, three stand out. First, the council’s decision to form partnerships with local businesses, restaurants and taverns to “create a friendly, welcoming environment focused on supporting SUNY Cortland Athletics and visiting fans in a positive way.” Despite the initiative, the Red Jug Pub’s official Cortaca T-shirt reads “Still Having Fun Under Impossible Conditions” with the final four words written acrostically.

It is clear that the impossible conditions mentioned in the Pub’s T-shirt allude to the heavy scrutiny on the city and college, which will be most noticed through the increased police presence throughout the town on Nov. 15 as recommended in the report.

According to the report, all but one of Cortland’s police officers were active last year. Considering the city has a reported police total of 45 to add to the 19 police officers on duty for SUNY Cortland, Pierce said that police officers from neighboring counties as well as New York State Police will be called in as well to deal with the nearly 8,000 expected visitors to the town on Nov. 15.

The increase in police presence is not the only method of legal force used by the city and college to take back Cortaca. The city passed a social host ordinance last April that would allow for party hosts to be arrested if police found underage drinking on the premises. It is an ordinance that the commission called to be strictly enforced this weekend. The penalties under it are a $250 fine or a 15-day jail sentence. While the criminal penalties have been strengthened, the report states students “are more concerned about the college’s student conduct system than by the court system.”

While neither SUNY Cortland nor Ithaca College’s respective Student Code of Conduct makes mention of social media use, the report recommended Cortland’s city and college police monitor social media during the weekend. The report blamed Twitter accounts such as @SUNYPartyStories for glamorizing the actions committed by rowdy students who tweet at it. Bombers head coach Mike Welch said the popularized events of last year’s Cortaca harmed the progress of the rivalry, which has seen its games decided by seven points or less in 13 of the last 17 meetings.

As a solution, SUNY Cortland sought to establish a student-led campaign warning students on the destructive effects social media posts can have on their unborn professional careers. Pierce said the administration is limited in its ability to take back Cortaca because it is a student-driven event derived from a football game played by students. He said the administration’s goal is to warn students of the consequences of their actions.

“When you post pictures of yourself on the Internet, even if you think it’s Snapchat or you take it down, I have a hard drive full of screenshots I’ve done of stuff — it’s still there,” Pierce said. “Everybody has it. … What we really want students to know is that people are watching. I’m watching, the City Police is watching, the college president is watching, their parents could be watching.”

Pierce framed the administration’s attempts to monitor students’ social media use as a necessary evil by likening it to the out-of-hand celebrations that occurred.

“Given what happened last year, the pendulum has to swing the other way,” Pierce said. “Last year it went over the line, it went too far, it has to come back. There needs to be a strong response to send this message. If things go well this year, then things will loosen up next year.”