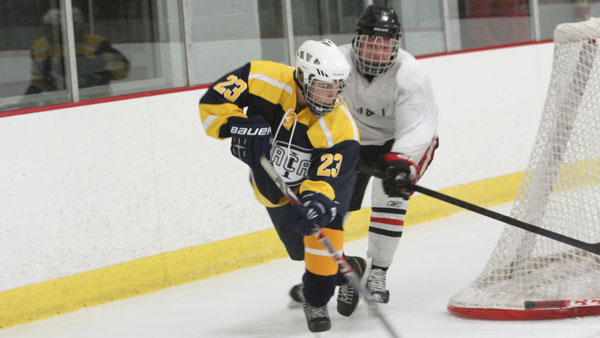 Last year, nine seniors ­— just under half of the 2012–13 men’s club ice hockey team — hung up their skates for good as they graduated from Ithaca College. Aside from a roster full of first-year players, this year’s returners to the club face a new challenge in their regular season and division play.

At the end of last season, the American Collegiate Hockey Association announced a split of its Northeast Collegiate Hockey League Division I club hockey program. Now there are two divisions to create a more competitive and physical program for the top five teams.

This means the Bombers, who placed in the top five last year, will remain in the first division as opposed to being demoted to the second division. By remaining a Division I club program, the team will face a more challenging road to travel in order to make the playoffs.

Last year, the team played 10 different teams. This year, only the scores against the four teams in the top half of the division — Niagara University, University of Buffalo, Syracuse University and SUNY-Oswego — will count toward the Bombers’ playoff seeding. They will play the six other teams in the second half of the division, but only once or twice, because the outcomes of these games won’t count toward playoff seeding.

The Bombers won their home opener on Sept. 21 with a 6–3 victory against the University of Scranton. The following weekend, they beat Washington and Jefferson College 7–4  on Sept. 28 and 6–3 on Sept. 29.

This past weekend, the team traveled to Scranton and lost 3–2 in the final four minutes. On Oct. 6, the Bombers played Cornell University and lost 3–2 when the Big Red scored with only a minute left.

The team will face its biggest challenge when it plays Syracuse University at The Rink in Ithaca on Friday. Last year, Syracuse (12–11) and Ithaca’s (13–12) season records were similar, and each team won and lost a game played against the other.

Senior assistant captain Adam King is looking forward to the Bombers’ first opportunity to take on a team in the new division despite having a rough weekend last week. King said to win, he and his teammates need to work hard in practice and play good hockey on game day.

“We’ve had a couple of non-league games to get some of the cobwebs off and start gaining some chemistry with each other,” King said. “Syracuse has always been a very good team, and we will without a doubt be in for a battle. As long as we go out and play our game, we’re in a very good position to take home a win this Friday night.”

With the challenges the club hockey team will face throughout the rest of the season in this new division, the players hold themselves to varsity-team standards. Senior Captain Rory Foster said with the club team’s new roster, the team can make it back to the playoffs.

“Everyone seems to be settling in nicely, and everyone is contributing so that we can roll all four of our lines, and all of us can get pretty equal playing time,” Foster said. “Everyone who’s on the team is really filling the role we want them to fill right now.”

“It’s a really good move for hockey at the school,” Smith said. “The new division will really test our skills and physical ability. The fact that the league wanted to include us in this highly competitive division says a lot about us.”

Though the team has already been successful this season, it still has to establish chemistry on the ice, which will take time. However, the team hopes to plan non-hockey-related activities in order to expedite the bonding process.

“The captains are hoping to get us to play some football and handball together — you know, things that don’t really pertain to hockey,” Smith said. “This will allow us to get away from focusing on what we do on the ice 100 percent  but will still allow us to work on something that promotes teamwork.”

Foster has an optimistic outlook for the rest of his senior season, especially since the team is ranked in the top 5.

“It is just going to give us the opportunity to take down better teams in our division who are bigger schools and have more players,” he said.