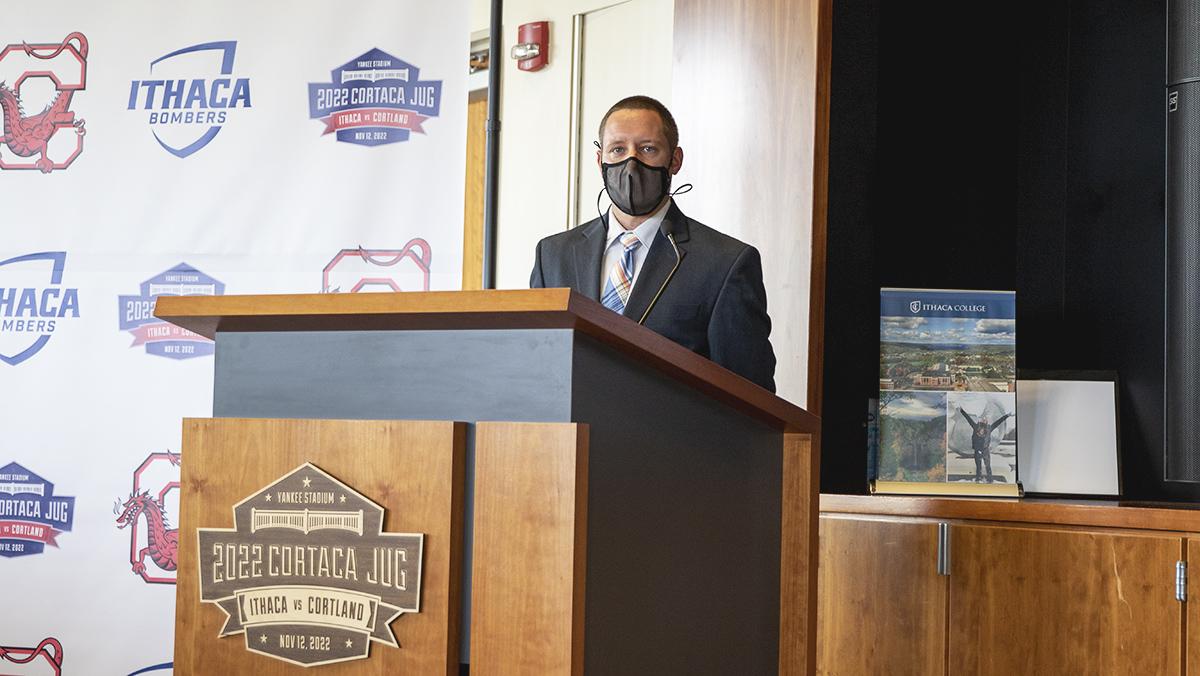 In a joint press conference between Ithaca College, SUNY Cortland and the New York Yankees organization, it was announced that the 2022 Cortaca Jug Game would be held at 1 p.m. Nov. 12, 2022 at Yankee Stadium.

Mark Holtzman, vice president of non-baseball sports events at Yankee Stadium and New Era Pinstripe Bowl, confirmed that both institutions accepted the invitation to hold the event in the Bronx, New York. Holtzman said both the Yankees organization and he were inspired by the 2019 Cortaca Jug Game, which was held Nov. 16, 2019 in MetLife Stadium located in East Rutherford, New Jersey.

“In a little over 14 months, the young men for both [Ithaca College and SUNY Cortland] will be gracing the same field that [former Yankees players] have graced in the last 100 years,” Holtzman said. “This game will add to the rich history and tradition at Yankee Stadium. Two New York schools, playing in the world’s most famous stadium.”

Susan Bassett, associate vice president and director of intercollegiate athletics and recreational sports, said the plan to play at Yankee Stadium started years ago. Initially, the plan was to play the 2019 Cortaca Jug game at Yankee Stadium, but a scheduling conflict led to the event being held at MetLife Stadium instead. Basset said the success from 2019 was one of the main factors that led to this agreement to play at the venue.

“We had barely cleared the cobwebs from 2019,” Bassett said. “Marc Hudak, [former president of the Ithaca College Alumni Association] was busy at work lining this up. We’re just truly fortunate that the date was available and that our Senior Leadership Teams from Ithaca College and [SUNY] Cortland agreed to allow us to move forward with the game.”

Mike Urtz, director of athletics at SUNY Cortland, and Curt Fitzpatrick, SUNY Cortland football team head coach, both expressed gratitude to Yankee Stadium for inviting the two programs and talked about the historic background of the venue. Dan Swanstrom, head coach of the Ithaca College football team, echoed their comments. Swanstrom added that the 2019 Cortaca Jug game had a noticeable impact on the college’s student body.

“One of the things that I really just truly love about the game in 2019, was how it brought our students together,” Swanstrom said. “From the School of Business to the School of Communications, putting a game on to the School of Music performing. And I thought that was just the neatest thing, just bringing the community together.”

“The Cortaca Jug Game is going to be the centerpiece of our first ever alumni homecoming weekend in New York City, taking place from Thursday, Nov. 10, [2022] to Sunday, Nov. 13, [2022],” Bassett said. “While the Cortaca Jug [Game] will be a centerpiece of Ithaca College’s annual homecoming weekend, it will be by no means the only game in town with the annual Alumni Award celebration, Athletic Hall of Fame induction ceremony and dinners and receptions for celebrated class years among the events planned.”

Bassett added that the Marriott Marquis hotel in Times Square in Manhattan, New York, will serve as the exclusive host hotel for that weekend. For the Cortaca Jug Game held in 2019, students were offered a free bus ride as a method of transportation to get them to the game and back to campus on the same day. Bassett said the college desires to have a similar system in place next year for the event.

“We haven’t worked out those details yet, but we want to make the game as accessible as possible,” Bassett said. “I’ll get with Vice President [Rosanna] Ferro and we’ll come up with a transportation plan that makes it available for every student. And we’re still turning our attention to those details, we haven’t gotten there yet.”

In 2019, the Cortaca Jug game broke the Division III single-game attendance record with 45,161 spectators. The largest attendance recorded for a football game at Yankee Stadium was Nov. 21, 2010 in a game between Notre Dame University and Army with a sellout attendance of 54,251. However, that number was reached by putting bleachers on the field, something Holtzman said will not be done this time to avoid obstructing the views from other spots in the stadium.

“So we cannot approach that number [from the 2010 game],” Holtzman said. “I can’t give you, at this point, an exact number. … Suffice it to say, our goal is to exceed the amount of people that were in the Meadowlands in 2019. That’s the goal. And I can’t give you an exact number as to how many that will be. But that’s our goal.”