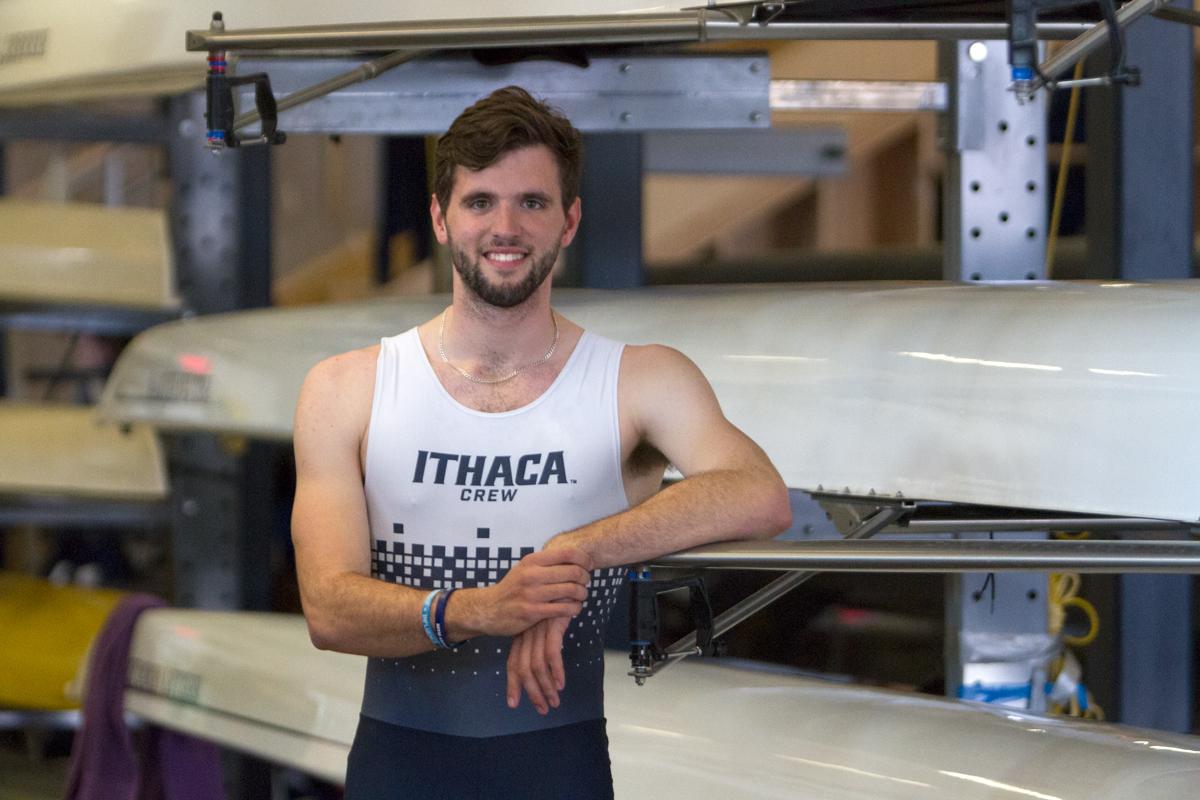 ELIAS OLSEN/THE ITHACAN
Senior captain Stephen Cadoux discusses what the men's crew team has to do to be successful in this year's championship season.
By Samantha Cavalli — Staff Writer
Published: April 11, 2018

The Ithaca College men’s crew team finished in 12th place at the National Invitational Rowing Championships last season. Senior captain Stephen Cadoux and the rest of the team are preparing for the upcoming championship season. Staff writer Samantha Cavalli talked with Cadoux to discuss a recap of how the season is going, what he’s excited about for the remainder of the season and how the team is preparing for the 50-year celebration.

Samantha Cavalli: Halfway through the season, how has it been going?

Stephen Cadoux: The season is coming together really well. The boat is coming together still and it’s very exciting to see that because we have had some close races so far and knowing that we still have a ton of room for improvement is amazing. The team is doing really well. Our Novice 8 just got a big win this past weekend against RIT. Our second varsity boat is doing phenomenally well. They are making leaps and bounds of improvements and doing way better than they have been. All in all, the team is moving in an upward trajectory that I didn’t necessarily plan for. The team is making a lot of improvements that I think everyone is kind of shocked to see how those improvements are coming off now.

Cavalli: This is the first season men’s crew is racing in a conference and racing for a conference championship. What has that been like?

Cadoux: Throughout the season, we’re not necessarily sizing up ourselves in the conference because it’s the same teams we have been racing. However, it is an extra race to prove ourselves. We’re not walking around saying, ‘What are we seeded?’ or ‘Where are we sitting now?’ It’s about getting ready for that one race. It doesn’t matter what seed you are. It matters about how you are going to come out in the end and that one six–minute race we can get out on top. We’re preparing for that and that’s another reason we’re excited.

Cavalli: As the season continues on, what are you most excited about?

Cavalli: Liberty League Championships and New York State Championships are the same weekend, back-to-back, and you are racing the same teams for the most part. How do you guys, as a team, prepare mentally and physically?

Cadoux: It’s important because one, we will be tired. So we have one race and then the next day we have to do it again. We have to be physically fit enough to be able to go back out there and give 100 percent, as well as, let’s say we win or lose. No matter what happens on the Friday, Saturday is a new race. We have to mentally prepare ourselves for if we lose on Friday, how are we going to be strong enough to not let that interfere with our progress on Saturday. As well as if we win on Friday, walking into the race on Saturday not feeling like we’ve got this in the bag even if you’ve already won the day before. Anything can change from one day to another.

Cavalli: Ithaca College crew is celebrating 50 years April 28 at the Cayuga Inlet. Many alumni are coming back and the first crew coach is returning as well. How have you guys been preparing for that?

Cadoux: We’re having a live band and food trucks, couple hundred people will be there. It’s a big event and it’s almost as if it’s another championship race. It’s the last race before championship season and this is where we get to showcase the work that we have put into getting to our championship. We need to put on a good performance, we need to put on a good fight, we need to show our alumni that for the past 50 years we have been having an upward trajectory to get to this point.