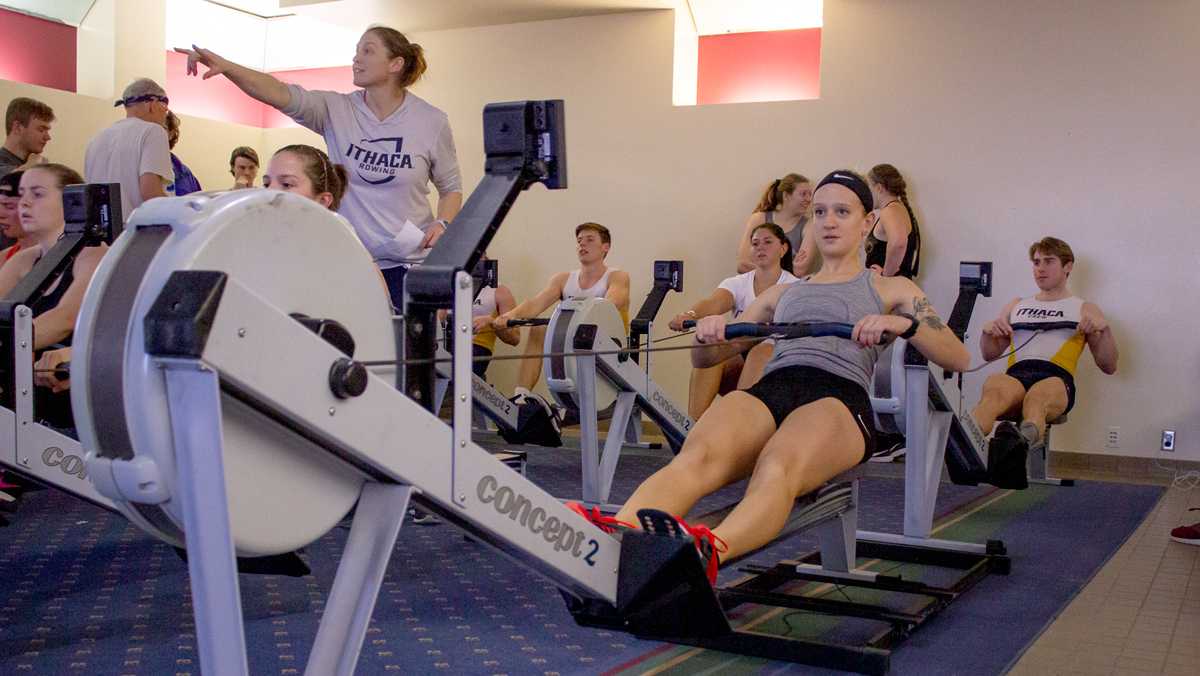 As Ithaca College students walked through the Campus Center on Jan. 27, the space was filled with pounding music and the grating sound of ergometers being used by members of the men’s and women’s rowing teams.

The squads worked out in the Campus Center for Row for Humanity, a row-a-thon event in which the Bombers collectively rowed 1 million meters to benefit the two teams and the college’s chapter of Habitat for Humanity. Family and friends pledged money before the event after receiving letters from the rowers. Men’s rowing coach Dan Robinson said that as of Feb. 3, the teams raised approximately $26,000, and they are also expecting to receive more checks by mail soon.

The event began at 8 a.m. and ran until 5 p.m. Over the course of the nine hours, the Bombers took shifts rowing at a uniform pace on eight ergometers that were set to 125,000 meters. The ergometers were stationed in the lobby outside the Emerson Suites for students to watch while passing by. Dan said that each member of the teams was required to row for a minimum of 50 minutes throughout the day instead of their usual training.

Freshman rower Jacob Lentz said it was a fun event because it was a different workout environment than the Athletics and Events Center, which is where the team does most of its winter training. He said it was a good opportunity to show his peers what he and his teammates do.

“It’s cool to show people on campus kind of what we do over the winter because a lot of people ask,” Lentz said.

The Bombers have raised over $30,000 over the last eight years and have donated at least $5,000 of that to Habitat for Humanity, according to Dan. The rest of the proceeds help the teams cover a portion of their spring break training trip to Georgia and cold weather gear.

Sophomore Abby Paquet, treasurer of Ithaca College Habitat for Humanity, said that the row-a-thon is the biggest fundraiser for the organization during the year. The donations from the teams fund activities like making necessity bags for homeless people. The club also benefits the local branch of Habitat for Humanity and Second Wind Cottages.

“Being supported by athletics is meaningful because it builds a sense of community on and off campus,” Paquet said. “It is also cool to be partnered with another campus club as it strengthens campus support and connection and increases our successes and efforts related to supporting Habitat for Humanity.”

Dan said the Bombers started participating in Row for Humanity, which is a national event that teams all over the country participate in, at least 12 years ago when Sandra Chu, William Smith College’s women’s rowing coach, brought the idea to them. The event was becoming popular among rowing teams in the midwest before Chu left her assistant coaching job at Kansas State University and joined the staff at William Smith.

Robinson said that prior to switching to Row for Humanity, the Bombers organized and participated in a row-a-thon that benefited the American Heart Association.

“We’ve been doing a row-a-thon for at least 30 years,” said Dan. “It was always a big thing, but Row for Humanity made it an incredible fundraiser because it was a national event.”

Row for Humanity provides the rowers with letter templates to mail to family and friends asking them to make pledges for the row-a-thon. The team members simply had to address and sign the letters before mailing them, adding a personal note if they wanted to.

Lentz said he wrote his letters to people back home in Rhode Island who he feels helped him over the years. He said many of his family members, friends and former teachers told him they appreciated the handwritten letter so much that they donated even more than the letter suggested.

“I made sure to put a lot of thought into it because a personal written letter can go a long way,” Lentz said. “We sent them out right before Christmas break, so when I came home, I had a lot of family and friends saying, ‘That handwritten letter meant so much.’”

Women’s rowing coach Becky Robinson said what she loves about donating to the college’s chapter of Habitat for Humanity is that the money will go into helping Tompkins County.

“I think that the concept of giving back locally is really important to people right now,” Becky said.

The men’s and women’s rowing teams placed 12th and fifth respectively at the National Invitational Rowing Championships on May 8.