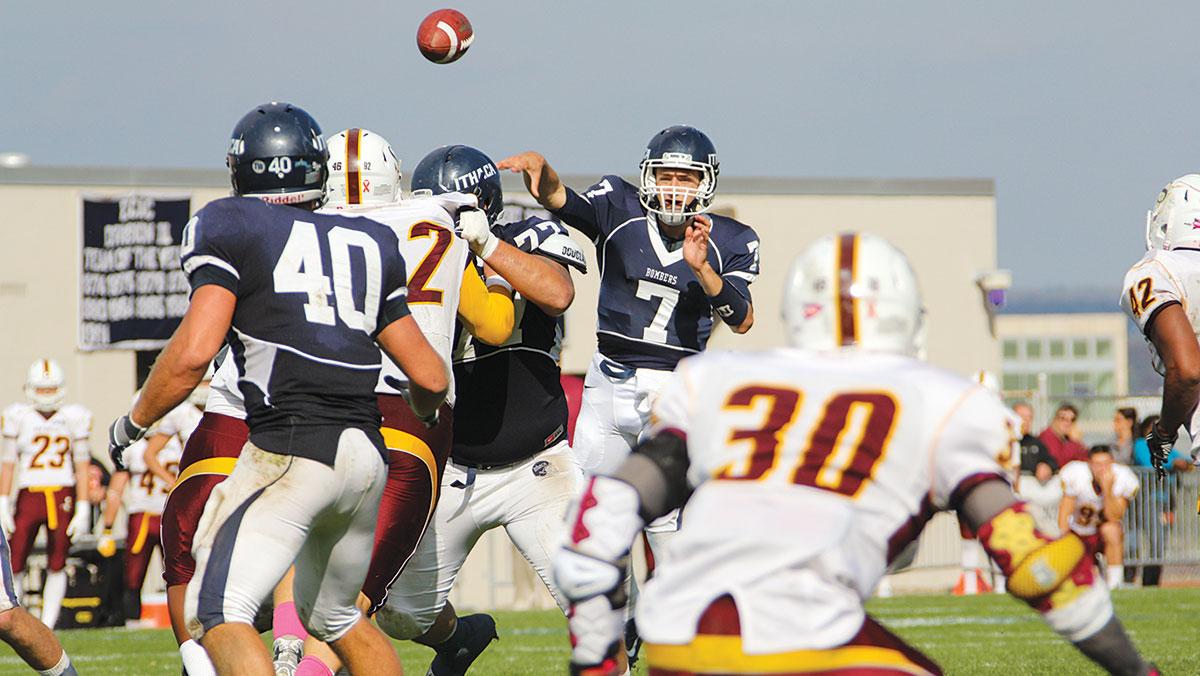 The quarterback is one of the most difficult positions in football. From countless plays to be learned and waves of defenders running after him, with hundreds of eyes watching — every move is scrutinized. With that much pressure squarely on one’s shoulders, it is a challenging job to be a good quarterback. However, senior quarterback Tom Dempsey has risen to the occasion and then some.

Dempsey was thrown into action last season when quarterback Phil Neumann ’14 went down due to injury in the Oct. 5 contest against the Hartwick College Hawks. Dempsey admitted he was a bit anxious once he stepped in the game, but he knew he had a job to do.

“It was a tough situation: We were down late in the game, and I was nervous,” Dempsey said. “But after a few snaps, I settled down, and it was just business as usual.”

Dempsey finished the game with 11 completions for 121 yards with one touchdown and two interceptions as the Bombers recorded their first loss of the season, 21–9.

However, Dempsey didn’t take long to get over the loss, as he was named the starter in week five, leading the Blue and Gold to a 6–2 record to close out the season. Additionally, he helped guide the Bombers to the second round of the playoffs for the first time since 2003. Dempsey finished the 2013 season with a 61 percent completion rating, 1,686 yards and 14 touchdowns.

Dempsey picked up right where he left off last season, throwing for all three touchdowns and notching a win against Union College on Sept. 6 in the first game of the year. He said the biggest change was getting that experience to play last year, and now he is ready to lead.

“The biggest difference from last year to this year is my confidence,” Dempsey said. “Now I know I am a leader and it is my job to get everyone in the right mindset to compete week in and week out.”

One teammate who has been on the same page with Dempsey throughout the season is senior wide receiver Vito Boffoli. Through seven games, Boffoli has 39 receptions for 402 yards and five touchdowns. Boffoli said he credits his hot beginning to the season to his rapport with his quarterback.

“We’ve been playing together since freshman year, and I trust him,” Boffoli said. “It’s an honor to play with Tom, and if it weren’t for him, I wouldn’t have anything.”

Dempsey has been able to keep his other teammates content as well. He has hit at least five different players for a completion in each game this season. He has also thrown for 1,786 yards, 18 touchdowns and a completion rate of 70 percent, which makes him the sixth-most accurate quarterback in Division III football.

To put his success into a better perspective, Dempsey is now sixth in the program’s all-time list in passing yards with 3,579. Head coach Mike Welch said Dempsey has been one of the most coachable quarterbacks he’s been able to work with in over 20 years with the team.

“He’s worked the hardest out of any quarterback that I have ever coached,” Welch said. “He has improved himself each year and is now at the peak of his career.”

Dempsey may be playing at his highest level so far in his career, but he has also dealt with adversity during this season. The Bombers suffered their first loss of the season on Oct. 11 at Butterfield Stadium to the Buffalo State Bengals, 38–27. Dempsey struggled in particular, throwing three turnovers, with two returned for touchdowns, and a fumble in the red zone at the 1-yard line.

Dempsey and the offense bounced back the following week, but the South Hill squad suffered another loss after surrendering 38 points to the worst-record team in the Empire 8 conference, the Frostburg State Bobcats. It was the Bobcats’ first time ever beating the Bombers and their first win against an Empire 8 team since 2012.

Looking to gain traction, the Blue and Gold then took to Butterfield Stadium on Oct. 25 to face off against the Salisbury University Sea Gulls. This time, both sides of the ball were clicking on all cylinders to deliver a convincing 32–7 defeat of the Sea Gulls to and keep the Bombers’ playoff hopes alive. Currently, the South Hill squad is one game behind St. John Fisher College in the Empire 8 standings, making its matchup with the Cardinals on Nov. 8 all the more important.

Dempsey said he knows it will be a tough road back to the playoffs, but he is prepared for the challenge.

“There is a greater sense of urgency, but we have to focus on winning now more than ever,” Dempsey said. “We have always been about winning every day from the start of the season.”