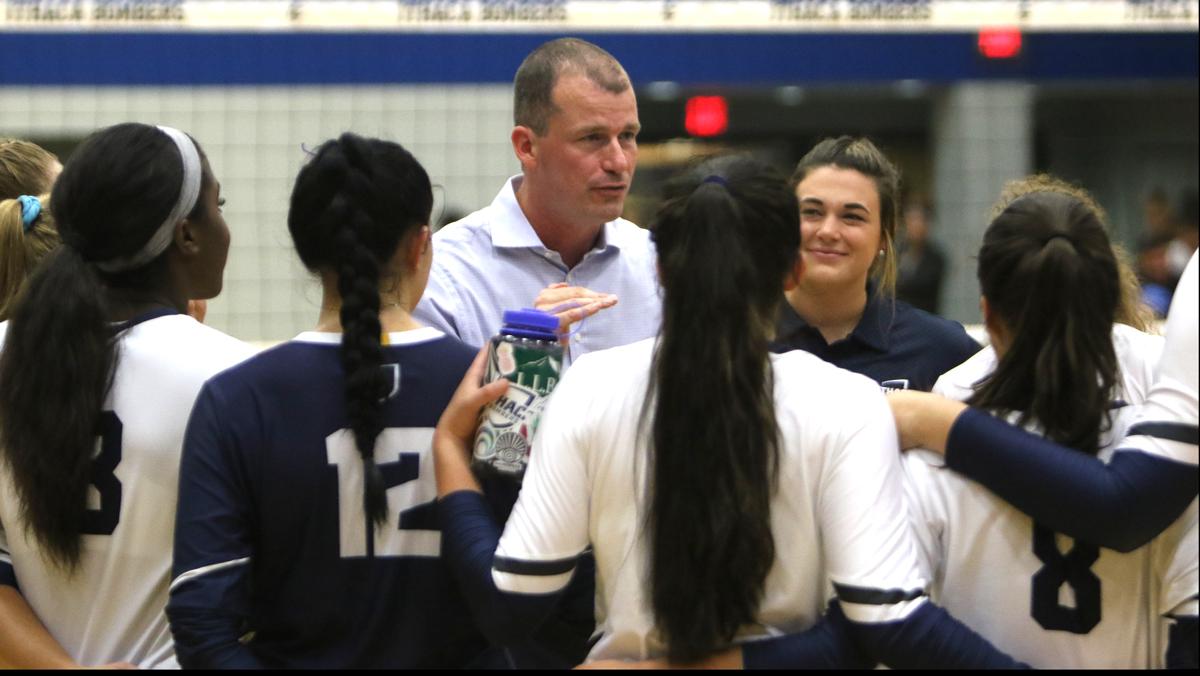 The Ben Light Gymnasium was packed with over 1,000 fans throughout the weekend to watch the Ithaca College volleyball team celebrate its 50th anniversary Aug. 31 and Sept. 1.

The Bombers welcomed three of the best DIII volleyball programs in the country for the 2018 Bomber Invitational, including Calvin College, Juniata College and Stevens College. The weekend also included an alumni social and an alumni game with some of the program’s all-time greatest athletes.

Head coach Johan Dulfer said he was pleased with his team’s effort during the tournament and is glad it got to showcase the program’s storied history.

“Ithaca volleyball is a proud program with a long and proud tradition,” Dulfer said. “We are thrilled to be hosting nationally ranked teams because that is the level where we feel this program belongs.”

The festivities kicked off with a much-anticipated matchup between No. 3 Calvin against the No. 8 Bombers. Fresh off the program’s first NCAA Final Four appearance since 1995, the expectations for the Bombers were through the roof.

Sarah Rich, former Bomber volleyball coach who retired from coaching in 1985, attended the 50th–anniversary celebration and said she has helped with tournament organization and occasionally ran a few practices throughout the years. She said she thinks this year’s team has the ability to go far in the playoffs.

“This year’s team seems to have the mental and physical abilities to achieve great things,” Rich said. “Any coach would enjoy working with this highly skilled and enthusiastic group.”

The Blue and Gold stood toe-to-toe with Calvin, but the Knights found a way to pull away at the end of each set. Even though they lost, the Bombers outpaced the Knights in kills 39–36 and out-digged Calvin’s attacking team 43 to 31. Senior middle hitter Amanda Cerruti registered a team high of 11 kills during the contest.

Sophomore hitter Reagan Stone finished with 15 kills and an incredible .700 hitting percentage to help the South Hill squad to victory.

For junior setter Caitlyn Floyd, being a part of the 50th anniversary solidified that she will continue to support the Blue and Gold when she’s an alum herself.

“I’ll definitely attend alumni events like this one after I graduate,” Floyd said. “I will also watch livestreams when I can. Last year’s graduating seniors were cheering us on through the livestreams, and it was great to have their support.”

Floyd said that the team is able to be successful because they understand the history of the program.

“I am very proud to be a part of the 50th Ithaca volleyball team,” Floyd said. “We have talked about the future of the program and where we want to be, so it’s nice to be able to look back at the history and see how the program has developed.”

The college’s women’s volleyball team became a varsity sport in 1968. Head coach Nancy Hicks coached the Bombers in 1968, 1970 and 1971. The volleyball program has historically been one of the most successful teams on campus, posting a winning record in 40 of the program’s 50 seasons. The Bombers have an overall record of 1,276–549–4 with a .699 winning percentage.

The program’s most successful season was in 1994 as the team finished with a 53–4 record and made a program-first appearance in the Division III semifinals.

The South Hill squad stretched its streak to four consecutive appearances in the NCAA tournament during the team’s 1996 season. To cap it off, the team reached 20 wins for the seventh straight year.

Heidi Nichols ’97 made program history when she became the team’s first athlete to be named a first-team All-American two years in a row and make the All-American team three consecutive years in 1997. Due to her success, she was inducted into the Ithaca College Athletic Hall of Fame in 2010.

The team advanced to the regional finals for the fourth consecutive year in 2001. The Bombers would go on to win consecutive Empire 8 Conference titles in 2004 and 2005.

One of the biggest years in program history for the Blue and Gold was 2015. The team won its first Empire 8 title since 2010 and earned its first NCAA victory in 10 seasons.

To cap off the success, the South Hill squad reached the NCAA Final Four in 2017, which was its best performance in the tournament since 1995.

Rich said that being at the tournament brought back memories of her time as a coach.

“My memories which are favorites are wins against teams that had taller and stronger athletes than Ithaca,” Rich said. “The players accomplished this by playing as a team and using their high volleyball IQ. I also enjoyed how the players improved each year they were on the team and how many are still playing recreationally many years later.”

With evidence of last year’s team performance and a No. 8 national ranking going into this season, Floyd believes this team can go down in the history books.

“I hope we will be remembered as one of the teams that helped Ithaca volleyball in an uphill climb to the top,” Floyd said. “We are not a perennial power yet, but I hope this team can be a foundation for that future success.”