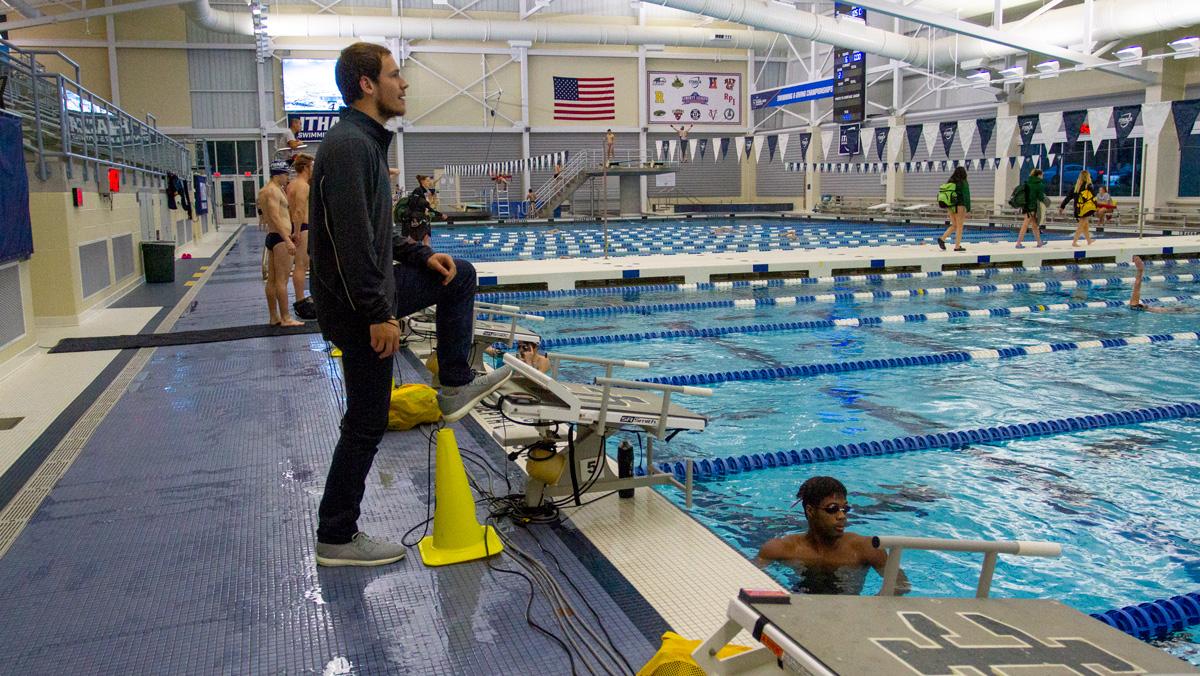 As graduate student Andrew Marsh finished his 50-meter freestyle race at the 2016 U.S. Olympic Trials, he knew his collegiate swimming career was over.

Marsh, the new graduate assistant coach for the Ithaca College men’s swimming and diving team, graduated from West Virginia University in 2016 after swimming for the Mountaineers. His career highlights include winning the 100-yard backstroke at the 2016 Big XII Championship and finishing in third in both the 100-yard butterfly and the 100-yard freestyle at the same competition. He also qualified for both the 2015 and 2016 NCAA Division I Swimming and Diving Championships and the 2015 Junior Olympics, where he competed for Team Pittsburgh and finished in first in multiple events.

In the 2016 Olympic Trials, he competed in four events, with his best finish being 20th in the 100-meter backstroke. While Marsh did not qualify for any events at the 2016 Rio Olympics, he said that he always wanted to end his career with the Olympic dream in the picture.

After graduating and deciding not to train for the 2020 Summer Olympics, Marsh chose to enroll at the college so he could take advantage of its sports psychology program, which he felt would balance well with his undergraduate degree in athletic coaching. He emailed head coach Kevin Markwardt when he applied in March about becoming a graduate assistant coach. Markwardt accepted and began to give him details about the program.

While swimming became his life passion, Marsh said that his introduction to the sport was to help him stay active as a child.

“I always joked that my mama put me in swimming at nine just to get me in shape, just get me off the couch,” Marsh said. “Ever since then I have kind of had an affinity for it and really enjoyed it.”

Markwardt said that Marsh has been a quality addition to the program since the departure of long-time assistant coach Jake Lichter ’13. Lichter, who took an assistant coach position at Cornell University, had been a four-year member of the team, as well as a senior captain. He then coached the team until the 2017 season. Markwardt said that while he did not know Lichter would be leaving until August of this year, he knew Marsh would add talent to the program. In addition to his swimming career, he also coached 12- to 18-year-old swimmers at a club program in Chicago as a volunteer assistant coach.

“After our initial conversation, I knew this guy wasn’t going to be a burden, like I need to give this guy something to do,” Markwardt said. “This guy is actually going to come in and help my program.”

Markwardt said that Marsh is one of the first assistants he has had that came from outside the program, and that has led to some different ideas involving training.

“He got these pieces of PVC plastic and put a noodle on them,” Markwardt said. “It makes a T, and you put it on the lane. We always are trying to get players to streamline when they enter the water, and this invention forces them to stay underwater.”

Streamlining refers to swimming form, and it is the most efficient way to tread water. It involves keeping the body straight so that there is as little resistance as possible to slow the swimmer down. It is especially important for swimmers to be able to streamline when they start a race, as it allows them to get the fastest start possible.

Markwardt also said that Marsh has designed the team’s Tuesday and Thursday workouts. Marsh devotes Tuesday workouts toward kicking mechanics. Marsh said that kicking was his specialty and that the skill is crucial to becoming a strong swimmer.

“I always joked that I wasn’t that good of a swimmer, I was just really good at kicking,” Marsh said. “If you look at the human body and all of our muscles, roughly 70 percent is below your waste. If you then look at how swimmers training, they are not kicking full fledge. If your lower body has that much muscle, you really have to train it so it can withstand a race.”

Senior Kellen Scanlan said that the experience that Marsh has brings gives the team a different view on how swimmers are performing and what they need to work on.

“He is the former DI swimmer, so right off that bat, we knew we weren’t at the same level that he was,” Scanlan said. “Getting that perspective of what it was like to be a DI athlete, and hearing him notice that our set is really hard helps us feel good about what we are doing because he swam at such a high level.”

While Marsh swam at the Division I level, he enjoys the effort the Division III swimmers give at the college and admires their desire to continue to play the sport.

“At the Division I level, there are a lot of people who have to be there versus want to be there,” Marsh said. “You, as a swimmer or an athlete, were really good in high school and got recruited to play Division I, which most people aren’t going to say no to. They could leave tomorrow and nothing could happen to them. They come out every day because they want to be here.”