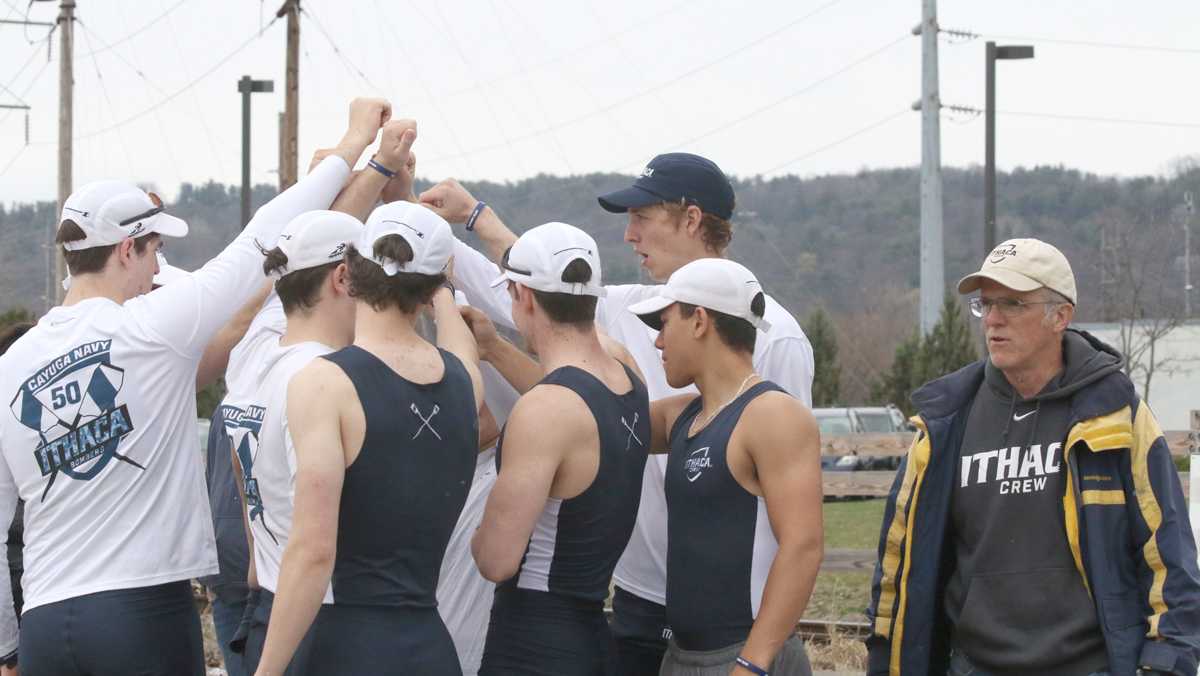 JULIA CHERRUAULT/THE ITHACAN
Members of the men’s crew team cheer after competing at the 50-Year Celebration on April 28 at the Cayuga Inlet. The Ithaca College men’s crew program was formed in 1968.
By Samantha Cavalli — Staff Writer
Published: May 2, 2018

On April 28, the Ithaca College crew celebrated its 50th season as a collegiate sport. The Ward Romer Boathouse was packed with family and friends as well as alumni from the past 50 years.

Senior Jay Williamson, coxswain on the women’s crew, began racing with the team in 2014 and raced on the second varsity eight boat that placed fourth at nationals last year. They said the atmosphere at the 50th Anniversary Celebration was wonderful because of the large number of people who attended.

“We normally don’t get a lot of people coming down to our races supporting us— it’s mostly just family members,” Williamson said. “To have this many people here today is fantastic. There are so many familiar faces but also so many faces that I don’t know, but immediately I am connected to them because of Ithaca crew.”

Women’s crew head coach Becky Robinson ’88 said the celebration took approximately a year and a half to plan.

“The idea was just about getting people together and keeping alumni connected,” Robinson said. “50 years, we thought, was a pretty big deal, so we looked ahead and tried to decide what that best date to do it was. We picked our last home race to hold the event.” 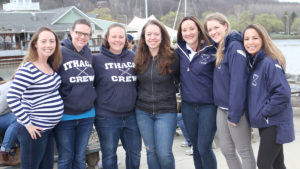 Kaitlyn Veninsky said the event gave her the opportunity to see her old teammates again.

On April 28, both men’s and women’s crew raced in their final home regatta of the season. They faced Hamilton College, Marist College and Colgate University on the Cayuga Inlet. Because it was also Senior Day, Robinson said, it made the event extra special.

“It was just one of the loudest home races we have ever had because there were a lot of people, and they were spread out on the race course,” Robinson said.

Ithaca College President Shirley M. Collado also made an appearance during the first half hour of races in the morning. She rode in the launch boat with Susan Bassett ’79, director of the Office of Intercollegiate Athletics, and they followed behind the varsity boat races.

The college’s men’s rowing team was formed in the fall of 1968. The first competition was held on April 19, 1969, when the Bombers rowed against University of Buffalo, Buffalo State and Canisius College.

Coach Gary Kilpatrick led the Bombers to a first-place victory in the Metropolitan Championship in New York City.

During the mid-1970s, the college’s crew was a medal winner at the annual Dad Vail Regatta in Philadelphia where it was crowned as the small-college national champion. In 1975, the Bombers’ heavyweights went 12–0 and came in third place at the Dad Vail Regatta. 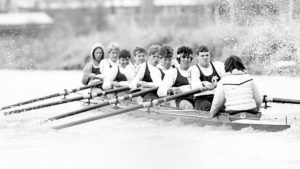 The college’s women’s varsity rowing team was created in the spring of 1975. The team competed as a club team until it became a varsity sport in 1983. The Bombers captured the 1976 Dad Vail varsity eight title the first year women’s races were offered at the regatta. Although women’s rowing grew nationally over the next few years, the Blue and Gold claimed the Dad Vail championship again in 1979, coached by Julie Rife, the stroke of the 1976 crew.

Current head coach Becky Robinson ’88 returned to help coach the Bombers in 1995 and became the first crew program representative to be inducted into the Ithaca College Athletic Hall of Fame.

The first NCAA-sponsored championship regatta for women was held in 1997. A women’s four from the college qualified for the all-division event and placed fourth in the petite final and 10th overall. The Bombers returned to the NCAA championships in 1998 and were the second-highest finishing Division II or III team at the 2001 championships. The team placed third at the 2002 event, which was the first championship exclusively for Division III teams, before placing third in 2003.

The 2004 team earned the program’s first national championship. The varsity eight boat earned a gold medal at the NCAA championships and the second varsity eight boat qualified for the grand final. Robinson was named the Collegiate Rowing Coaches Association Coach of the Year for the second time in her career. In 2005, the college became the first to repeat as Division III national champions.

“My first year coaching, I was coaching novices, and my first fall season coaching, all three of my boats won,” Robinson said. “All three of them picked me up and threw me in the into the Schuylkill River, which wasn’t enjoyable, but that was a very memorable moment for me.”

On April 28, there was an alumni row held on the Cayuga Inlet where 50 alumni participated in the race. Robinson also got involved and raced with alumni of 1987 and 1988. She said that the oldest female rower there raced with them, and she was from the class of 1976. 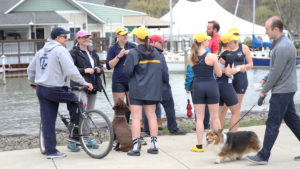 Members of the crew teams talk to alumni at the 50-Year Celebration on April 28.

“I think 50 years shows longevity, and it’s a reason to celebrate,” Robinson said. “It’s a reason to bring people together and keep connections. In terms of anniversaries, I think 50 is a pretty big one. I do think that people in general put more value on an anniversary that is 50 years versus other ones, and that is just enough to get more people back.”

WIlliamson said that when they graduate, they are going to miss the feeling of racing like other alumni said they do.

“It’s like almost an addiction where we are so used to seeing each other every single day,” Williamson said. “Suddenly, we’re separated, but we are also so connected from so many years together that when we do see other again, you can’t believe how much time has gone by.”