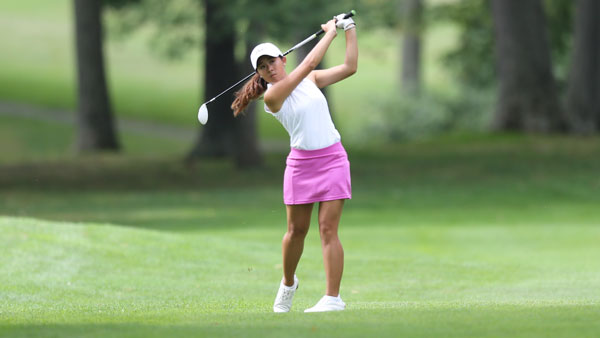 Like many high school seniors, Kimberley Wong of Shouson Hill, Hong Kong, was applying to colleges that would provide her with good academics, a good campus atmosphere and good athletics. But all of the colleges she looked at were halfway across the world.

From a young age, Wong knew she didn’t want to further her education in Hong Kong. She wanted to gain independence from a place in which she had become very comfortable.

During her junior year of high school, Wong visited seven colleges in the U.S. However, she ultimately chose Ithaca College, a school she had considered as a possibility and applied to, but never visited.

Wong’s final college decision was greatly influenced by Dan Wood, head golf coach. Though he never traveled to Hong Kong, Wong said she could tell Wood’s attitude about the team and love of golf would make Ithaca a perfect fit. Not only this, but Wong also knew that if she chose the college, a fellow golfer would make her feel closer to home.

Just three miles and a 10-minute car ride separate Happy Valley and Shouson Hill in Hong Kong. These two towns are where junior Sharon Li and freshman Kimberley Wong grew up. Despite living so close, the two only came face-to-face once while playing golf in their home country. Now they both play together on the Ithaca College women’s golf team.

In 2010, Li and Wong competed at the Club Championship at Xili Golf and Country Club in Shenzhen, China. They knew of each other, but did not compete directly at the tournament, yet this one brief meeting was enough to make an impact on Li’s teammate.

Li has established herself as a key contributor on the women’s golf team, while Wong, though young, has already made an impact, winning the Rookie of the Year award at the Empire 8 Championships on Sept. 15.

Li, who has been named the Empire 8 Player of the Week for the past two weeks, attributes much of her improvement over the past few seasons to her coach.

Li said Wood has helped her recognize what types of shots to take when facing a difficult shot on the course and how to handle any rule-based issues if they arise. Finally, Li said, the values her coach practices and preaches have transferred over to her life off the course.

“He is a mentor, a great friend, an awesome caddie, but most of all a wonderful and knowledgeable coach who I respect,” she said. “I have learned a lot from him on and off the golf course. His belief of honesty, diligence and respect has made me a better person.”

Junior Kelsey Baker has been on the team with Li for the past three years and said this season, Wong has altered the team dynamic. She explained how interesting it was to hear her teammates switch between talking English and Cantonese. Baker said she thinks that two’s bond is special. It couldn’t naturally form with any of their other teammates.

“While they are friends with many other people and close with the team, I think their friendship is something special and that they work great together,” Baker said.

Wong said having another teammate from Hong Kong made her transition to college easier, but she felt comfortable with her teammates right away. She said now she feels she has adjusted to living far from home.

“Sharon and all of my teammates made [coming here] a smooth transition for me,” Wong said. “They never make me feel left out. are my family and will probably be the closest friends that I will make in college.”

Wong said one of the biggest differences about playing in the U.S. is the number of golf courses. In Ithaca, where just over 30,000 people reside, there are five courses within 10 miles of campus, but in Hong Kong, where the population is 7.184 million people, there are only six courses throughout the entire 426 square mile city, which is approximately 10 times the size of San Francisco. She said it is difficult to get private time on the golf courses in Hong Kong. Her commute to her home golf course is at least an hour away because she has to take a ferry to get there.

Both Li and Wong faced a great change when they chose to travel halfway across the world to become members of the Bombers’ golf team, but they said they are happy to have each other. Li said the beginning of this season was especially exciting because she knew she would have a familiar face by her side.

““Having another person from Hong Kong [on my team] just makes me feel like I’m at home again,” Li said.