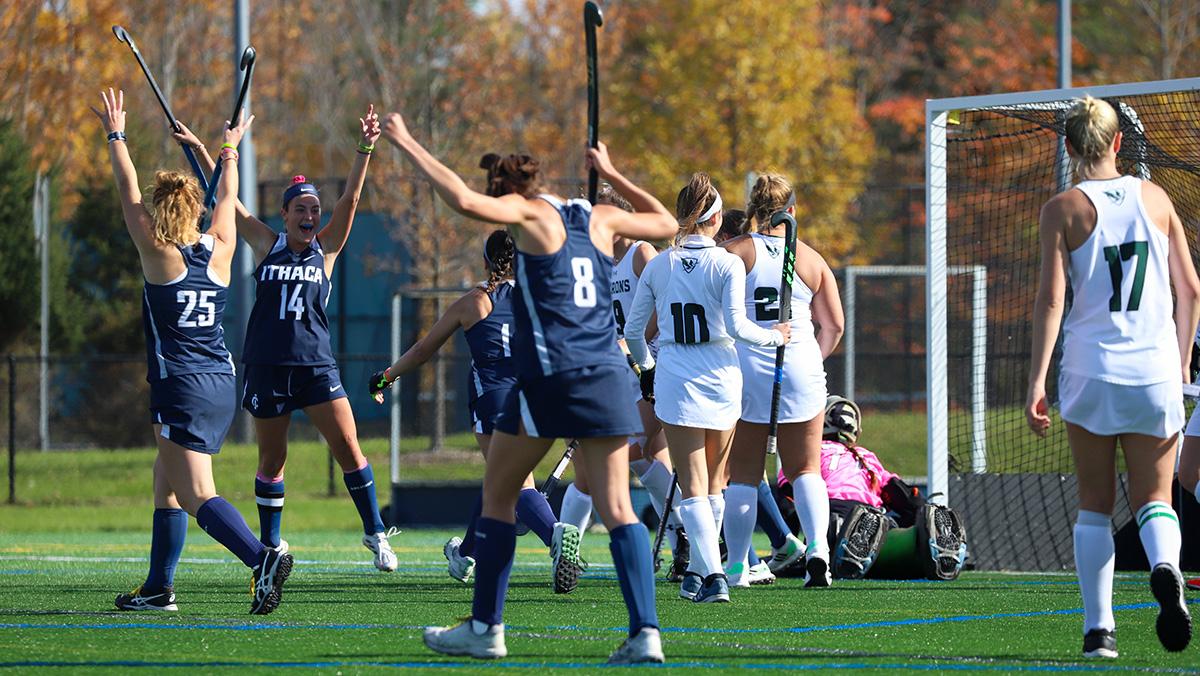 After falling 1–0 to the University of Rochester on Oct. 21 in double overtime, the Ithaca College field hockey team was quick to bounce back with a 2–0 victory over the Herons of William Smith College in the penultimate game of its regular season. The win improves the team’s overall record to 13–3 and advances its conference standing to the top of the Liberty League.

As both teams entered the competition with a 5–1 in-conference record, the stakes of the skill-riddled matchup were showcased through physical midfield play. The initial quarter was largely spent attempting to maintain possession.

The Bombers’ graduate student midfielder Jacqueline Mirabile played a key role in distributing the ball and creating offensive opportunities, but the frame remained scoreless until the final minute of play when sophomore striker Natalie Descalso sent a cross-field pass to senior midfielder Amberly Christiansen. Christiansen was able to hit the boards, registering her first goal of the season and the third of her career.

Tensions grew in the second quarter when the evenly matched teams once more struggled to maintain possession on either side of the field. Although scoring opportunities were few and far between, the Bombers were able to find time and room on two occassions to put shots on goal. The Bombers’ senior striker Morgan Mullen was the only player to test the Herons’ junior goalkeeper Kristen McCormick, but McCormick’s impressive performance held the quarter without score.

Following halftime, the Bombers immediately cushioned their lead with a second goal only 1:08 into the third quarter following a clutch interception by Descalso, who was able to hand off the ball for Mullen to finish. The Herons were quick to answer with two back-to-back shots on goal, but the Bombers’ graduate student goalkeeper Macy Brandwein came up with crucial saves on the ground.

Head coach Kaitlyn Wahila said that after an unlucky loss on the road, it was a pleasure to be able to celebrate Senior Day with a valuable win at home.

“Our team’s ability to pick ourselves up after that game, show up to practice yesterday and then come out here today and dominate the play is super exciting,” Wahila said.

Wahila continued that with only one more game of regular season play, it is especially important that her athletes continue to take things one day at a time.

“It’s a little bit crazy to think that we have one more regular season game left, but it’s one more opportunity for us to do what we’ve been setting out to do — which is to develop and grow with every single game,” Wahila said.

The Bombers will be back in action when they host the Nazareth College Golden Flyers at 4 p.m. Oct. 25.