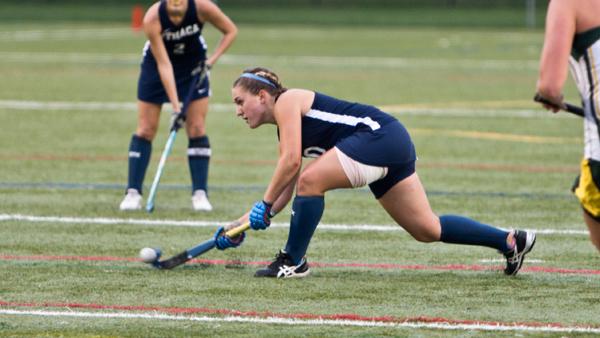 The field hockey team improved to 6–5 overall after it defeated SUNY-Brockport on Tuesday with a score of 4-0. The Bombers are two wins short of equaling their best season since 2008, when they went 8–9.

Junior forwards Katie Kennedy and Lindsay Flanagan scored a goal apiece, while senior forward Julia Conroy scored two goals for the Blue and Gold. The Bombers scored three first-half goals to give themselves some distance in the first 35 minutes. Conroy said the South Hill squad didn’t look back after she scored the first goal 10 minutes into the game.

“We always want to score early and set the tempo; we are able to control game after we score,” Conroy said.

Senior goalkeepers Kelly Singleton and Sam Grassi each played one half and combined for the team’s second shutout of the season.

Brockport senior captain Jessica Nasuti said she was pleased with how the Golden Eagles began to fight back toward the end of the game.

“We had a slow start at the beginning and picked it up towards the end,” Nasuti said. “If we played that way during the entire game, it would have been a different outcome.”

With Tuesday’s win, the Blue and Gold moved back above the .500 mark. Head Coach Tracey Houk said she believes a winning record will be a big confidence boost for her team.

“It’s something we can use to motivate us for our next game on Friday against St. John Fisher — which is an Empire 8 game,” Houk said. “We have to be up and ready to play, and anything that is going to boost us to get through that game is good.”