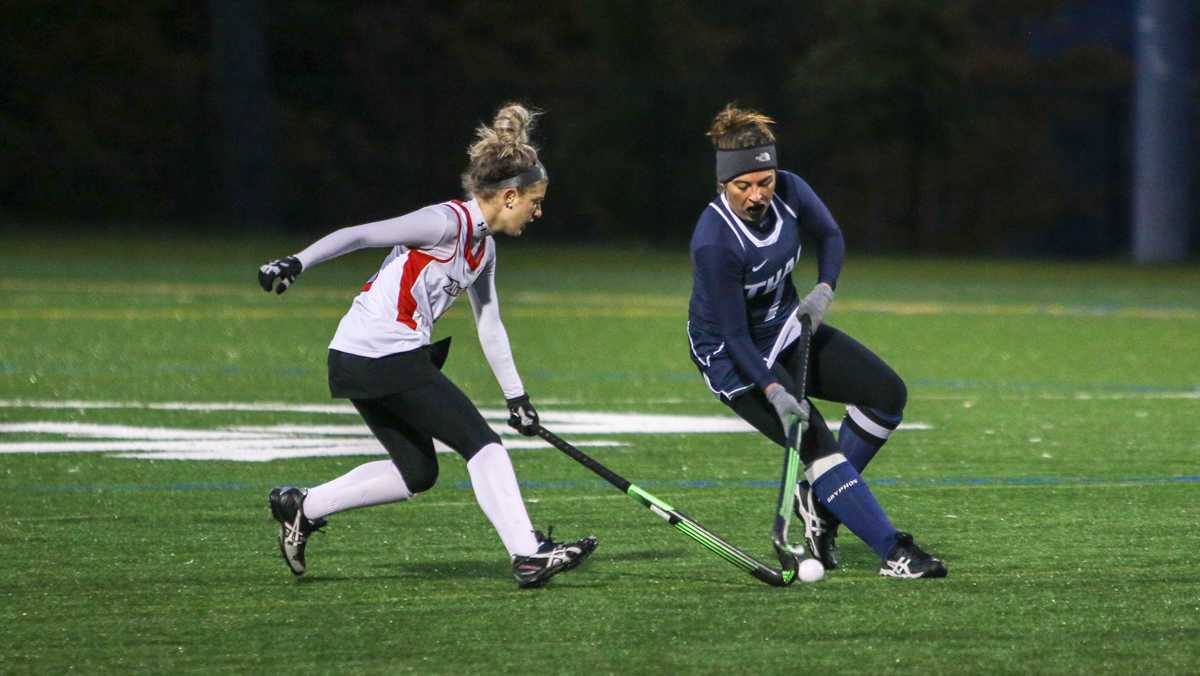 A cold night at Higgins Stadium Wednesday night was all the Ithaca College field hockey team needed to get hot as the Bombers took down the SUNY Oneonta Red Dragons 6–2 Oct. 24.

Head coach Kaitlyn Wahila said the team stressed offense at practice, especially after the Blue and Gold’s 1–0 loss to Skidmore College on Oct. 21.

“One thing we really stressed was goal scoring,” Wahila said.

The Bombers had the first strike scoring just three minutes into the game. Freshman midfielder Jacqueline Mirabile had a shot that sailed right in for a goal with an assist from senior striker Maria McGloin, making the score 1–0 in favor of the Blue and Gold.

Fifteen minutes later, sophomore Natalie Milliken scored her first goal of the season. She said that the reason the team scored more goals tonight was due to  more movement on offense.

“Our passes were really quick tonight, and we did a really nice job of cutting,” Milliken said.

The Bombers scored the final goal of the half with just 42 seconds remaining. This time, it was the team’s points leader Maria McGloin scoring the goal. It gave McGloin her 26th point of the season along with a 3–0 lead going into halftime.

“It was so important to set the tone in this game and score early,” Wahila said. “That is something we really wanted to do coming into this game.”

The South Hill squad started off right where they left off when senior striker Meg Dowd scored off of a corner. Just two minutes later, freshman striker Samantha Horowitz scored her second goal of the season with an assist from sophomore striker Kristen Rafferty to make the score 5–0.

The Red Dragons showed signs of life in the second half with a goal from freshman forward Catherine Soults for her third goal of the season. The Blue and Gold had a quick answer to the goal, as it only took them one minute for Dowd to get her second goal of the game to make the score 6–1 in favor of the Bombers.

Junior forward Alise Anson scored the final goal of the game for the Red Dragons with approximately three minutes left in the game to make the final score 6–2.

“It was so important to get a win tonight for our seniors especially since we lost on Senior Day.” Milliken said. “It was also nice to get a win on my birthday.”

The Bombers improve their record to 11–6, and they will play their final game of the regular season at 2:30 p.m. Oct. 27 in Brockport N.Y., to take on The Brockport Golden Eagles.