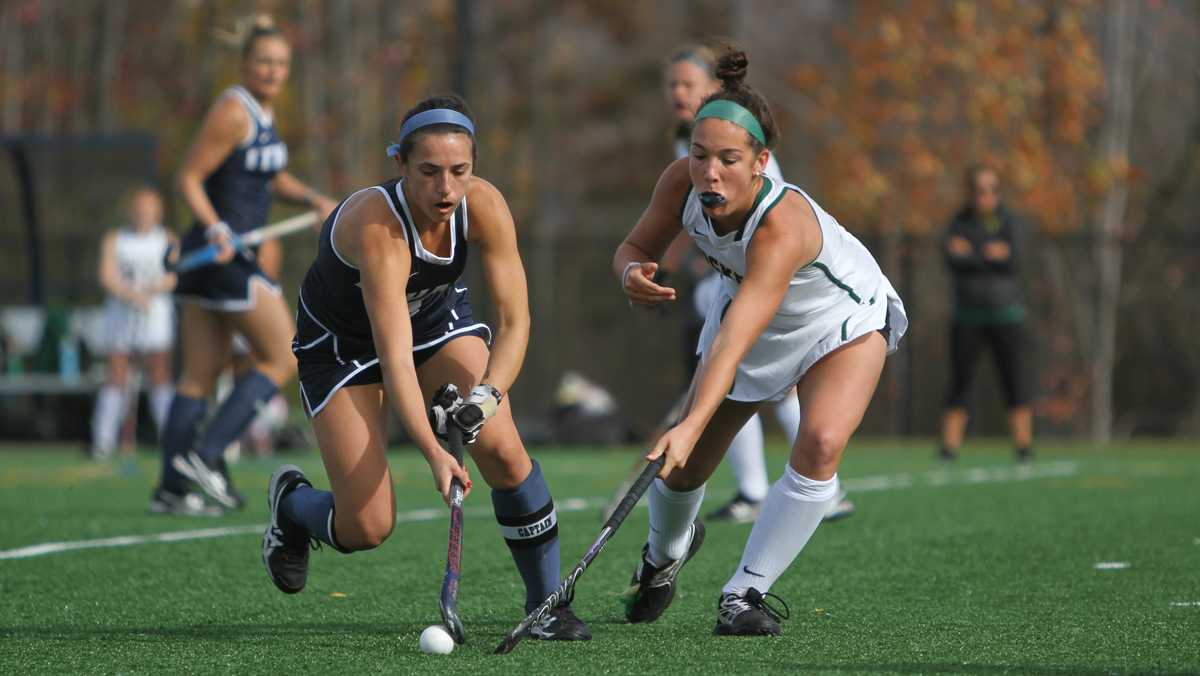 The Ithaca College women’s field hockey team defeated SUNY Brockport 6–2 Oct. 28 at Higgins Stadium. The game was the season finale for the Bombers, who finished with a record of 7–10.

The Bombers were in the midst of a seven-game losing streak entering the contest, and hoped to end the streak. They came out on fire as junior striker Maria McGloin scored within the first minute of the game, on a pass from junior striker Meg Dowd. Shortly after, Dowd would add one of her own when the ball deflected off of a Golden Eagle defender. After two minutes the score was already 2–0 for the Blue and Gold.

At around the 10-minute mark, Dowd tallied her second goal of the day. The play was started by sophomore striker Brooke Novello, who threaded the ball past a Golden Eagle defender, and fired it to Dowd, who one–timed the ball into the net. Brockport was not taking great care of the ball in the first half, and this, combined with the Bombers’ relentless pressure, was a lethal combination.

About eight minutes later, Dowd added another goal. Shortly after, senior striker Michaela Donohue went top shelf on a penalty shot, giving the Bombers a commanding 5–0 lead in the first half.

The second half was more even, as Brockport was able to put two on the board within the first seven minutes. The first goal was scored by Golden Eagles senior midfielder Kaitlin Croghan, and the second was scored by freshman midfielder Jenna Croce. While momentum appeared to shift towards Brockport, freshman goalkeeper Maddie Guerrier was able to shut it down the rest of the time, and earn her first collegiate win.

The Bombers added a sixth goal when McGloin was able to finish on her own rebound with 13:25 left to play. The score would not change, and the Bombers picked up a very big win. They had the shot advantage, 39–10. Bombers head coach Kaitlyn Wahila said she was very pleased with her team’s performance.

“It was a great way to end the season,” Wahila said. “We had a great first half, and really executed well. Meg Dowd and Maria McGloin were both very impressive today.”

The game today had plenty of sentimental value, as it was the last game of the season. For senior captains Michaela Donohue and Amanda Schell, this was their last time in the Bombers uniform.

“It never feels good to end a season, but I am so proud of our team, especially our two seniors,” Wahila said. “They left everything on the field, and both had tremendous careers.”

It is now time to look towards next season, where the Bombers hope to improve upon their 2017 record.

“I am looking forward to the future,” Wahila said. “We have some juniors who can really finish, and I think we are ready to do some damage.”