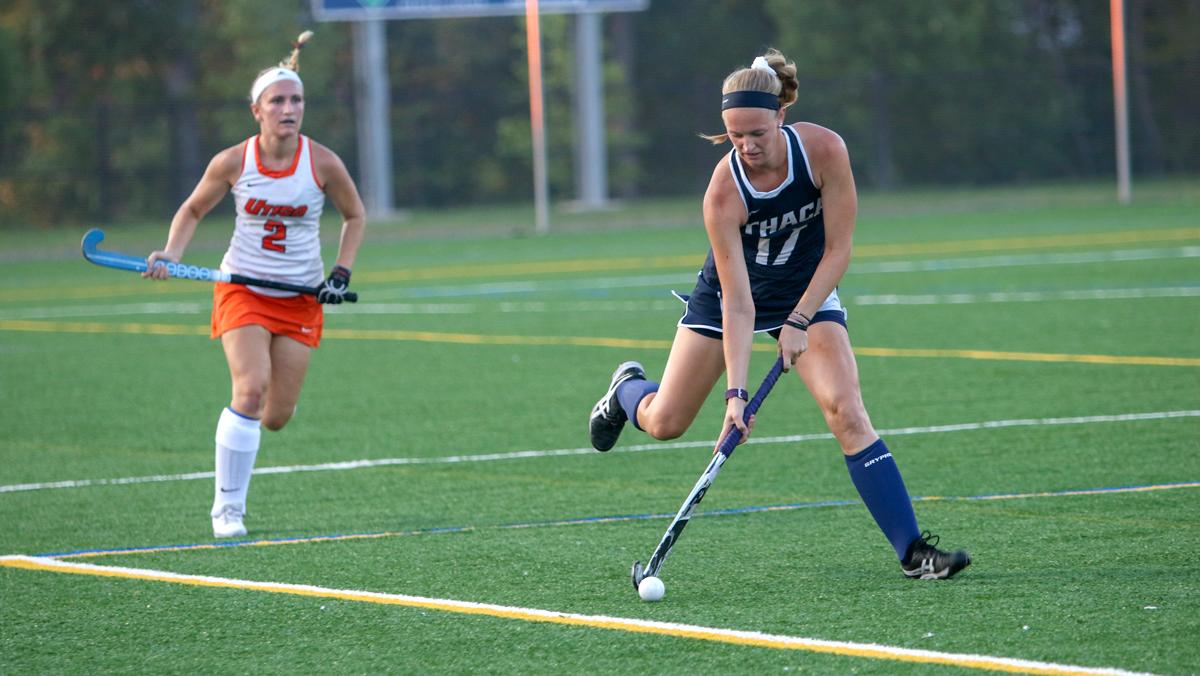 The Ithaca College women’s field hockey team defeated Utica College 2–1 in overtime Sept. 5 at Higgins Stadium. The game was the Bombers’ home opener, coming into the game with a 1–1 record, with a loss last Saturday to Montclair State University in Montclair, NJ.

The Pioneers struck first, senior forward Rylee Meelan scored a goal on a pass from junior midfielder Kaitlynn Palmer within the first two minutes of the game.

With one goal against them, the Blue and Gold looked to even up the score. But the rest of the first half was uneventful for both teams, neither able to score for the next 33 minutes. Bombers goalkeeper, junior Savannah Lenker, was able to make six saves while only allowing that one goal.

Coming back from halftime, the Blue and Gold were eager to score. Fourteen minutes into the second half, the Bombers were able to even up the game. Sophomore striker Kristen Rafferty scored her first goal of the season off a pass from senior striker Maria McGloin.

Tied 1–1, with twenty-one minutes to go in the second half, the Bombers were looking to close out the game with a win. The South Hill squad took nine more shots but were not able to make a goal within regulation time. Both team’s defenses proved superior, Lenker adding one more save in the second half.

When the game’s 70-minute regulation time period was up, the Blue and Gold headed into overtime. McGloin was able to score the game-winning goal, off an assist from senior striker Meg Dowd, within the period’s first fifty-four seconds.

“It was amazing to score the winning goal,” McGloin said, “but honestly it was a team effort. Today was really special for us, we could all feel it before stepping on the field for overtime. It was our home opener, it was under the lights, and we just wanted to show everyone just how much our program has grown.”

Head coach Kaitlyn Wahila said she was ecstatic about winning the team’s third game of the season. “It was great. Certainly pretty dramatic there at the end, but it was awesome to be able to pull off the win. And to be so resilient after being down 1–0 was even better,” she said.

The Bombers look to continue their winning streak against Misericordia University at 1 p.m. Sept. 8 in Dallas, Pennsylvania.