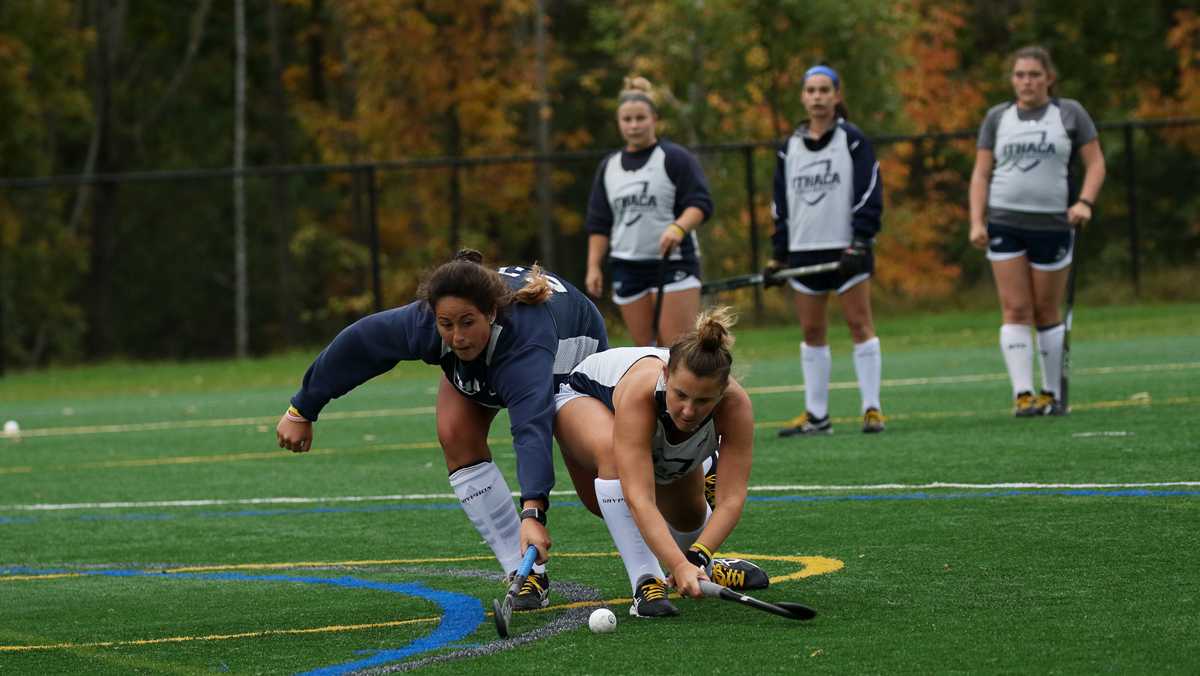 The Ithaca College women’s field hockey team revamped its strategy for this season after failing to make the Liberty League tournament in 2018. The Bombers implemented a brand-new defensive formation and filled the spots left by eight graduates with a young back line.

Last season, the South Hill squad played with a diamond formation on defense, which included two wide defenders, a defensive midfielder and a low holding defender. This year, the team has switched over to a new system of two low defenders and three defensive midfielders.

The new formation gives the Bombers five players in the backfield as opposed to four in the diamond system, but it also allows for the trio of defensive midfielders to push further into the attacking end of the field and contribute there as well.

The Bombers started off the season 5–0 but have since fallen to 7–4. Head coach Kaitlyn Wahila said the team faced opponents with faster attacking players during a 0–4 stretch, and she said the team has worked extensively on recovery and conditioning.

In the Liberty League, the Bombers have the second-lowest number of goals allowed with 14. They have allowed one or fewer goals to be scored in eight of their 11 games this season.

Wahila said the coaching staff collectively decided to make the change, knowing that the young team would be more adaptable to a new formation. She said the system is not typical for Division III.

“The majority of teams play a more traditional formation, which is what we played last year,” Wahila said. “That’s another reason why I think this is cool. We’re breaking the mold and challenging our players to think outside the box.”

Sophomore defenders Allison Egan and Victoria Sestito have locked into the low defensive spots. Sestito has played every minute of every game so far this season, and Egan has only come off the field in three out of 11 games. Junior Arleigh Rodgers has brought experience to the back line, moving from her previous midfield position to a more defensive role this season.

Senior goalkeeper Savanna Lenker has also been key in the transition. Wahila said Lenker’s leadership in the net keeps the group together.

“She is helping us stay really stable back there,” Wahila said. “Sav is so stable that it really makes the players feel confident and comfortable when most of them are competing for the first time for 60 whole minutes.”

Sestito only played 394 minutes last season and has already tallied over 600 in 2019. She said the system gives the defensive players more responsibility, which allows them to have more options when transitioning the ball into their offensive end.

“You don’t always want to push the ball forward. You can bring it back and transfer,” Sestito said. “When we transfer from the left to right or right to left, it really opens up the field and allows for more movement within the offensive and defensive mids.”

Wahila said the biggest benefit of the new formation is that it gives the squad the ability to adapt to be more offensive or defensive depending on the strengths of every individual opponent.

“We can leave two strikers and have three backs, or we can have three strikers with two backs,” Wahila said. “It gives us the opportunity when we’re scouting opponents to see what they’re good at and how we can match up. There’s been some games where we adjust and have an easy transition midgame.”

The team often relies on Lenker to communicate any changes in formation and movement around the field during games. Lenker said it was difficult at first to adapt to the new system, but she said she now feels much more confident making those calls.

Wahila said the biggest challenge of the new system is that it requires the whole team to quickly move into both attacking and defensive roles as possession changes.

“We’re a very attacking-minded team, so we can break down easily in transition,” she said. “When a team has a breakaway and we are in a recovery situation, we really have to get back. We have to be careful with other teams’ speed because a couple of passes has the potential to beat us.”

The new formation has been integrated into the team’s zone-man coverage, its staple defensive technique. Rather than marking up on individual opposing players, the squad covers particular zones within its defensive circle that are most dangerous for scoring opportunities.

“You’re able to step and react to the ball to intercept rather than waiting for the opponent to get the ball and then reacting,” Sestito said. “It’s a quicker defense, and that definitely helps our play.”

Wahila said the transition to the new system would not have been possible without the defenders’ willingness to learn and their confidence in themselves and each other.

“They call themselves the D Squad,” she said. “Any time we do anything in practice where it’s attack against defense, they have such a swagger about themselves. That’s something that started a couple years ago and has really been a tradition that has been passed along.”