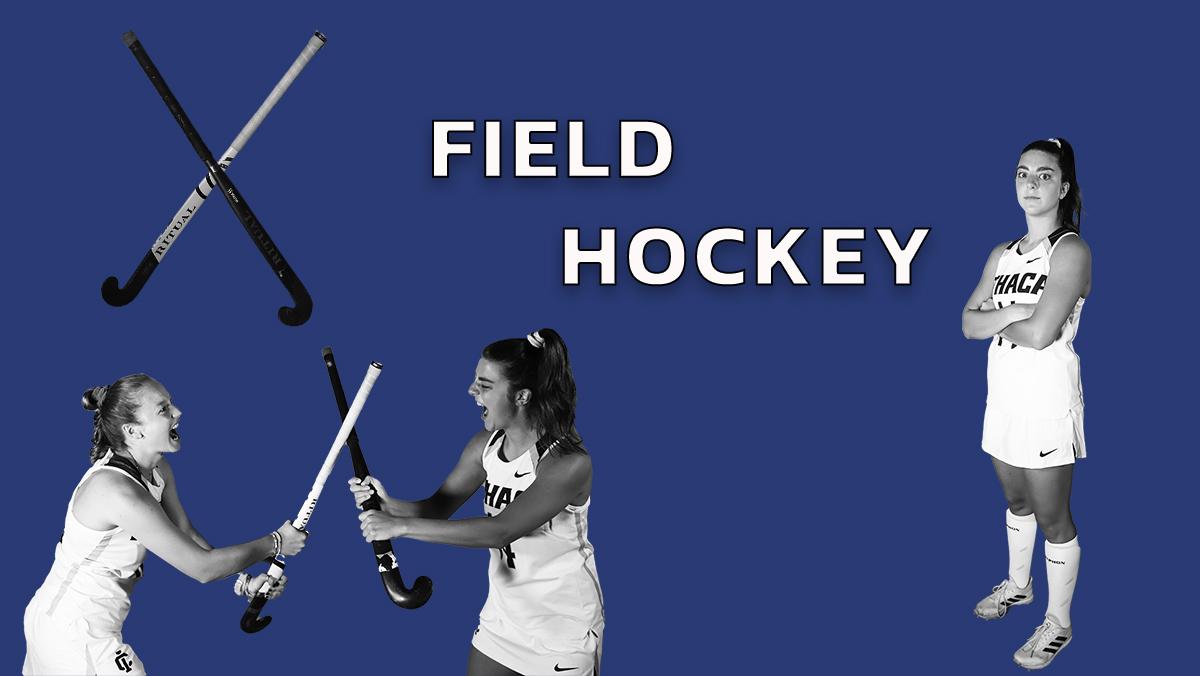 Nolan Saunders/The Ithacan
From left, seniors Elizabeth Pillow and Amberly Christiansen of the Ithaca College field hockey team. The team is looking to compete at the National level after falling in overtime in the Liberty League Championship in 2021.
By Tobiah Zboray — Staff Writer
Published: August 31, 2022

After a trip to the Liberty League Championship game in 2021, the Ithaca College field hockey team is looking to improve its success going into the 2022 season.

Last season, the team finished with a 14–5 record and hosted the Liberty League Championship game where the Bombers lost to Vassar College 1–0. Head coach Kaitlyn Wahila said the team has clear goals in mind and knows where they want to be at the end of this year.

“Without a doubt, we want to find ourselves competing for a Liberty League title,” Wahila said. “We ended the season with that opportunity in 2021. With that being said, we want to take every game and be able to learn from it and develop as a program so that by the time [the] end of October rolls around, we’re ready to be able to take our play and elevate it to the next level.”

With a goal set for 2022, the Bombers spent Spring 2022 preparing for the season. Senior captain Elizabeth Pillow said the team used the past spring to get physically ready by lifting and conditioning.

Pillow also said the work the team did to get prepared extended beyond getting physically ready — they were also figuring out what the team looked like coming into this season. The team held a scrimmage and alumni game at the end of the spring semester in preparation for the 2021 season.

“We were just working on heightening our stick skills and making sure that we’re working together cohesively so that we’d be ready this fall because our preseason is only four days this year, so everyone needs to make sure that they’re on top of it and just ready to go,” Pillow said.

On the field, the Bombers took the opportunity to find leadership in its senior class. Along with Pillow, another senior captain who stepped up to be a leader was Amberly Christiansen, who said that she is looking to not only lead the team but help guide the freshmen.

Joining the team this season are six freshmen. Pillow said that the team hopes to use the freshmen this season both in the backfield and on the attack after losing depth in both areas with four seniors from last season graduating.

Wahila said the freshmen this season bring a combination of talent that she feels can aid the team in all aspects of the game.

“We have a really good mixture of attackers and defense inside of that [freshman] class, which is always a good thing,” Wahila said. “So we have Shannon Dougherty who is goalkeeper, so she’ll add into our goalie culture really nicely and add a third goalie this season, which is really exciting. Then we have Amalia Hickey, who is just a great kid, who’ll probably be a midfielder. Eliza Ballaro will probably be more of a defender for us and then Brenna Schoenfeld will be a midfielder. Anne Leach will be a defender as well as Reese Abrahamson.”

Adding to the leadership that the graduate students will bring, other upperclassmen will be looked on to step up as leaders on the team, looking to fill the roles from the past senior class.

Pillow said the upperclassmen on the team have strived to take on a leadership role to lead the freshman class.

“A lot of the rising junior class have stepped up to mentor the sophomores and help with incoming [freshmen] this year,” Pillow said. “And also the senior class feels as if we have unfinished business because of how things ended last year, so I think everyone is on the same page of stepping up and making sure that, you know, we’re stepping up and that we’re ready.”

Wahila also added that the season will feel different for the team with COVID-19 restrictions being fully lifted. Last season featured precautions in the team’s first season returning to play since the beginning of the pandemic. But Wahila said that without those restrictions, specifically rules about masking indoors, she expects the season to be a return to normalcy for the team.

“If anything, it’s going to be similar to our spring season [practices] which was, in my opinion, pretty much back to normal during the months of April and May.” Wahila said. “I do believe that this season will be kind of like 2019 in terms of pre-COVID[-19] times.”

With the team getting ready to start the season, one other detail has the team excited to get going this year. After losing the conference championship last season to the Vassar College Brewers at home, the Bombers will play them at home this season at 1 p.m. Oct. 1 in a rematch of the championship game.

For returning players, Christiansen said the rematch against the Brewers will serve as something for many players to keep in their minds while the team is getting ready for the season and something to look forward to after they start playing.

“I think there’s excitement as well as a little bit of good revenge,” Christiansen said. “With that being said, as we train, we always keep in the back of our minds that we’re hosting Vassar again, and they’ll be on our turf. So I think we’re all really excited, and we’re definitely going to be working toward that game. And when that game does come we’ll give it our best effort.”

With that Vassar game in mind, Pillow said that the Bombers also want to make sure that they focus on the current game and not get too far ahead of themselves looking at the schedule.

The Bombers will open the season Sept. 1 against SUNY Geneseo at College Stadium in Geneso, New York.