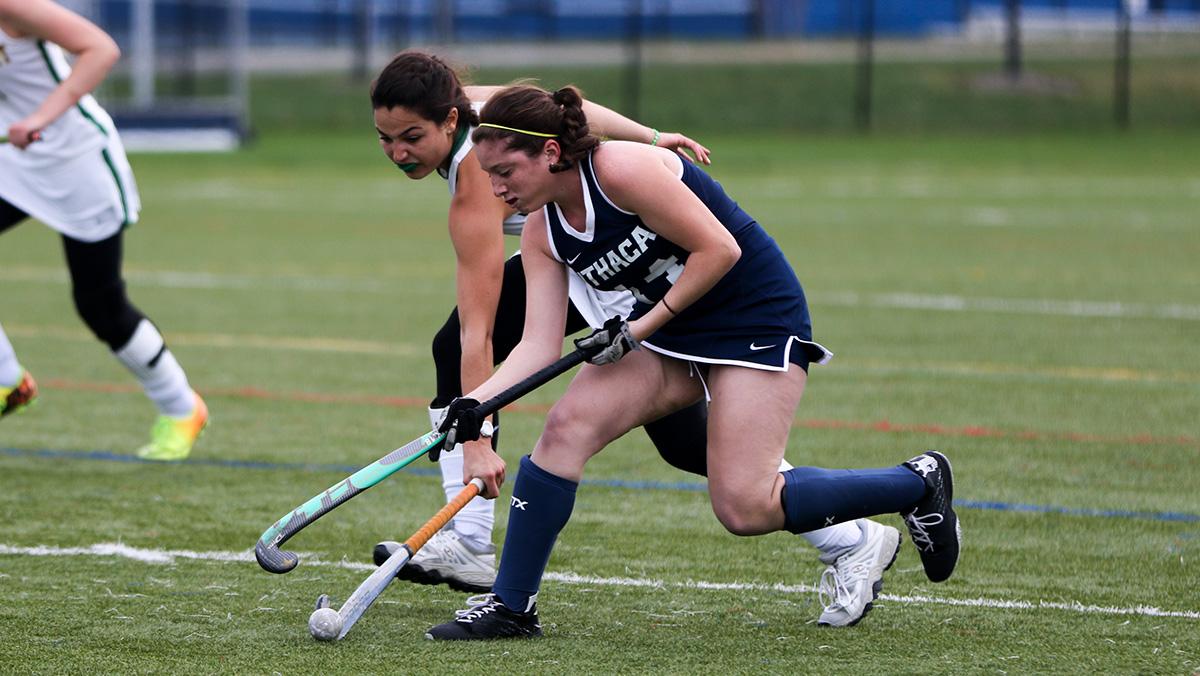 Kait Turkett/The Ithacan
Freshman Maria McGloin battles with a SUNY Brockport defender during the field hockey game Oct. 31 at Higgins Stadium. McGloin scored her second goal of the season in the 5–0 win against the Golden Eagles.
By Reed Keller — Contributing Writer
Published: October 31, 2015

The Ithaca College field hockey team returned to the field Oct. 31, looking to turn Higgins Stadium into a house of horrors for SUNY Brockport.

The game against the Golden Eagles served as the final tune up for the Bombers before they host the Empire 8 tournament for the first time in school history Nov. 6–7.

The game began as a tightly contested defensive battle. The Blue and Gold mounted some serious pressure early on, attempting three consecutive penalty corners with 27 minutes remaining in the first half, but were unable to convert on any of their opportunities.

With 23 minutes left in the half, the Bombers broke through. Off a scramble in front of the net, sophomore Michaela Donohue, potted her seventh goal of the year off an assist from junior Lauren Delia. The goal made it 1–0 Bombers and marked the 10th time they had scored first this season.

Two short minutes later, the Bombers would convert on their fourth penalty corner of the day. After Delia began the action with an entry pass, junior Colleen Keegan-Twombly knocked home her team-leading 14th goal of the season. The initial shot squeaked past Brockport freshman goalie Sarah Beam and found the stick of Keegan-Twombly.

With 20 minutes to go in the opening half, the Blue and Gold would extend their lead on Maria McGloin’s second goal of the season, off an assist from freshman Kaylou Stoddard. The assist was Stoddard’s first point of her career. Stoddard fired a shot toward the Brockport net and the rebound found the stick of McGloin, making it 3–0 Bombers.

Shortly after, senior Olivia Salindong found Caitlin O’Brien in the slot, and O’Brien showed off some serious power, firing a shot that found the back of the net with a resounding thump, making it 4-0 Bombers.

The four goals were enough to chase Beam from the game as the second half began. Freshman Adriana DeDie took over in net for the Golden Eagles. Ithaca’s defense continued to dominate after the break, keeping Brockport from getting anywhere near the Bombers’ net.

With 16 minutes left in the final half of the regular season, Donohue tallied the Bombers’ final goal — her second of the game. The goal came off an assist from Laurel Shnider, which was her first collegiate point and ensured that all three seniors had a point on Senior Day. That score made it 5–0 Bombers, which would be the final.

With the Empire 8 Tournament looming, Shnider, Salindong and O’Brien said they all feel confident heading into next weekend. Despite the identities of three and four seeds remaining a mystery until later this evening, Salindong said it’s not about who they will play host to.

“All of the teams are a pretty good match for us.” Salindong said. “We did pretty well against conference teams this year, so anyone will be a good opponent.”

O’Brien said the win was huge for the Bombers, as hopes to keep the momentum going continue.

“When we beat Stevens earlier in the year, that was big for us,” O’Brien said. “That was a really big game, and it shows that we can hang with anyone in this conference.”

In addition to the game being the regular season finale, it was also Senior Day for the Bombers. The team honored its three seniors, who also serve as the team’s captains: Shnider, Salindong and O’Brien.

Head coach Tracey Houk said the seniors have played an integral role in the team’s success over the last four years, largely because they all bring a different set of skills to the game. Their contributions are also those that don’t necessarily show up on the stat sheet.

“Olivia is so skilled and embodies the three C’s- calm, cool and collected,” Houk said. “Caitlin brings serious intensity and a rocket of a shot. Laurel is the unsung hero of the team. She consistently draws the other team’s fastest forward and has done well with those assignments all year.”

The Bombers next opponent is to be determined, however their next game will be at 3 p.m. on Nov. 6 at against the 4th seed in the tournament. The Bombers increase their record to 12–4 with the most regular season wins since they went 10–8 in 2013.