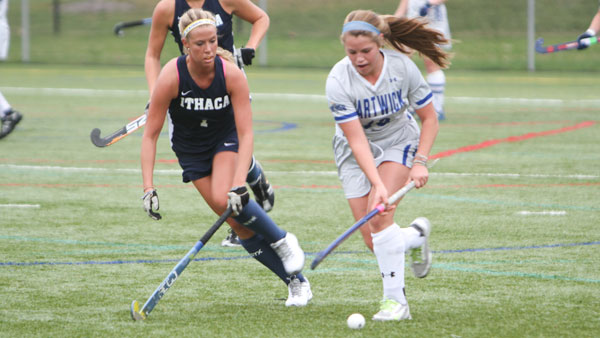 With a record-setting (10–6) winning season, the Bombers field hockey team has earned the No. 3 spot in the Empire 8 and a chance to win the Empire 8 conference championship for the first time since 2009.

Freshman Lauren Delia said the Bombers surprised their conference competitors, as they finished three places ahead of their preseason 2013 conference rankings.

“We have grown so much from the beginning, and we have accomplished so much this year,” Delia said. “We were only predicted to be sixth in the Empire 8, and we reached third, so we have far exceeded our expectations so far.”

The South Hill squad finished the regular season at 10–6 overall and a 4–3 record in the conference. These 10 wins topped the Bombers’ records throughout the past nine seasons by at least two wins.

The improved offensive and defensive play have contributed to the squad’s record-setting success this season. The team has already broken records for the number of goals and assists from its recent seasons. Junior Danielle Coiro leads the Bombers with 10 goals, followed by senior Katie Kennedy with nine and senior Lindsay Flanagan with seven.

On the defensive side of the field, freshman goalkeeper Katie Lass has only allowed 30 goals this season, which is the fewest goals surrendered by the team in at least nine seasons.

Delia said the team’s success has come from several aspects of the team, including the significant progress that the athletes and coaching staff have made throughout the season.

“It really shows how we are getting better every year, and we just keep going in a positive direction,” she said. “We keep getting great athletes coming onto the team, the seniors to the freshman are getting so much better throughout the season and coaches have changed their style of coaching, which has helped us a lot.”

With all of their accomplishments, the Bombers have a shot in the Empire 8 competition for the first time since 2009, making this year the first conference tournament for every player.

The Blue and Gold will take the field Nov. 9 against Utica College, which defeated the Bombers 4–0 earlier in the season. Following that game, Stevens Institute of Technology will face-off with St. John Fisher College to determine the two competitors for the championship game.

Kennedy said, heading into this tournament, the Bombers believe they can play with any conference competitor.

“In the years past, we have always had that confidence to be good, but I really think the fact that we have beaten teams who beat us in the past and held our own against NCAA-ranked teams gives us even more confidence,” Kennedy said. “We have built a confidence that can bring us to the top of the Empire 8 tournament.”

Senior Emily Lash said while they struggled against the Utica Pioneers in their first meeting, the Bombers know they have the potential to win, especially with the return of key players who were injured when the teams played each other Oct 2.

“We have the talent and we know that we have the skills, so we just have to put our mind to it, leave it all out there, and we can win,” Lash said. “We have already seen Utica before, and we lost to them, but we had two important defenders injured and three athletes out of position, so it makes it so that they don’t know what is coming.”