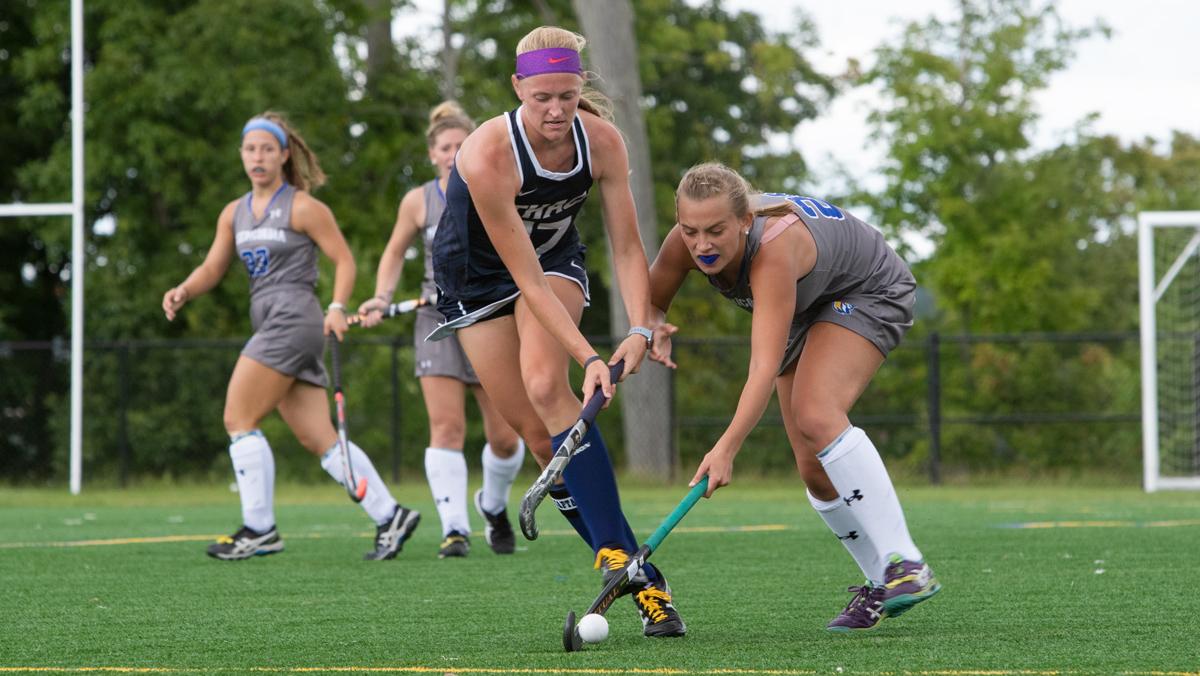 The Ithaca College women’s field hockey team beat Misericordia University by a score of 1–0 Sept. 7 at Higgins Stadium, improving to a record of 4–0 so far this season.

The lone goal was scored by sophomore midfielder Jacqueline Mirabile in the opening minutes of the third quarter. There were several chances for both sides to get on the board as the Bombers registered 14 shots, 10 of which were on goal. Misericordia tallied seven shots with four on goal.

The Bombers continue their undefeated start to the season in a game in which possession was the key factor in their victory. Misericordia’s chances were limited by both the Bombers’ ability to maintain possession and the defensive performances of sophomore defenders Victoria Sestito and Anna Parrish.

The majority of the first half was spent in the Cougars’ defensive end. Misericordia only got one shot off in the first 30 minutes compared to the Bombers’ six shots. Although the South Hill squad’s attack was lively, it was unable to put one away. Sophomore striker Morgan Mullen came close in the first quarter, and junior striker Kristen Rafferty nearly missed in the final minutes of the second quarter.

Within two minutes of the start of the third quarter, Mirabile put the Bombers on the board with a shot from the top of the circle that found its way past Misericordia senior goalkeeper Katelyn Campbell.

“Jackie is a really highly skilled player,” she said. “She’s an attack-middie, so there are times where we need our attack-middies to shoot more, and she did exactly what we needed her to do.”

Another key moment occurred when both Sestito and Parrish prevented a Cougar goal by diving in front of the ball during a scramble on the goal line during the fourth quarter.

Wahila said the lengths the two defenders went to keep the Cougars off the board were crucial to the win.

“It was just amazing to see their strength back there,” she said. “They literally did everything they could so that that ball didn’t go over the goal line, and, honestly, it saved us the game.”

Mirabile said the team’s overall performance was because of its mentality.

“I thought we had a pretty good effort out there, definitely had a lot of chances,” she said. “We always talk about good hard work, and that’s what we did today.”

The Bombers return to action at 4 p.m. Sept. 11 against Hartwick College at Higgins Stadium.