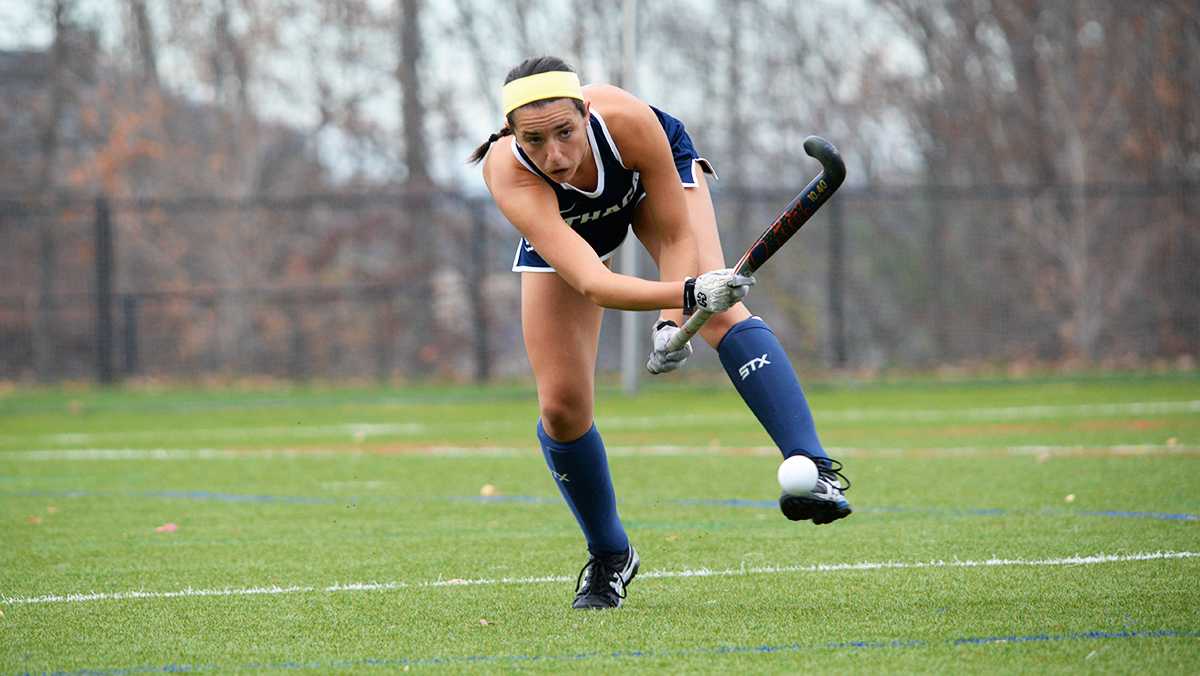 On an overcast Nov. 6 at Higgins Stadium, the field hockey team kicked off the Empire 8 Championship against Washington and Jefferson College, defeating the Presidents 2–0. The Blue and Gold are hosting the tournament for the first time in its history.

The game against the Presidents began as a back-and-forth affair, with both teams covering the length of the field, but neither registered a shot until sophomore forward Amanda Schell directed one on net 10 minutes into the game.

With 21:50 remaining in the first half, senior captain and back Caitlin O’Brien left the game with a head injury. The Carver, Massachusetts, native had played a total of 1,111 minutes for the Bombers in the regular season. After receiving attention on the sidelines, O’Brien returned with six minutes remaining in the half, but was fine after the game and never lost confidence in the team.

“This team, they’ve worked well all year, with or without me,” O’Brien said. “Of course I wanted to get over there and get stitched up as soon as possible, but I’ll be back out there for the final.”

With a minute to go in the opening stanza, the Bombers attempted a penalty corner, their second of the day. With a yellow card assigned to Washington and Jefferson’s Kelsey Bowman, the Bombers not only held the offensive advantage but a player advantage as well. Kelsey Chatterton started the action with a perfect entry pass, but the ball missed a mass of Bombers and left the arc, ending the Bombers’ best chance to break the ice.

The Bombers came out with impressive offensive pressure, attempting a penalty corner within the first two minutes of the second half. Both went wide of the net, keeping the game deadlocked at zero. Shortly after, Washington and Jefferson took its turn at the offensive forefront with three consecutive penalty corners, but junior goalie Katie Lass stood tall, turning aside all three golden opportunities.

With 21:11 to go in the game, the Bombers broke through in a big way. Junior forward Cassie Schuttrumpf received a perfect entry pass from junior forward Lauren Delia and took a backhanded shot that found its way in the net, skipping past the President’s senior goalkeeper Morgan Brozena, making it a 1–0 Bombers game.

A minute later, the Blue and Gold got another tally from their leading goal scorer, junior forward Colleen Keegan-Twombly. The Kingston, New York, native tallied her 15th goal of the season, beating Brozena to the left side post, extending the Bombers’ lead to 2–0, which would be the final.

As time wound down, the large crowd at Higgins Stadium rose to their feet in a frenzy, knowing that this Bombers team was headed to its first Empire 8 final and a shot at its first title since the 2013 season.

Lass said advancing to the final takes some pressure off the team, regardless of the fact that they still do not know who their opponent will be.

“Now that we know that we are in, we can relax a bit and take it all in,” Lass said. “Today was a tough game and we were able to overcome it.”

Head coach Tracey Houk said she was proud of the way her team played, despite the long layoff in between contests.

“It was a very solid defensive day. At halftime, we talked a lot about staying composed and continuing to fight,” Houk said. “Once we found the net, we got hungrier and they got a little frazzled.”